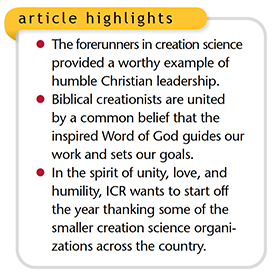 How much richer would our lives be if we more often had experiences that gave us a delightful rush of wonder and overwhelming surprise? It’s too bad that as we age fewer experiences leave us feeling totally astonished. I can’t help but envy the close followers of the Lord Jesus during His time on Earth who saw firsthand daily events that left them astonished. A word study of “astonished” as it relates to Jesus shows that His words alone astounded everyone—for “no man ever spoke like this Man!” (John 7:46). Everybody was awestruck by His miraculous works.

Perhaps for many of us, though, we’d simply marvel at how differently Jesus behaved than anyone we’d ever met. Knowing that Christ is the Son of God, we’re bewildered by one example in Jesus’ life that He summed up as “If I then, your Lord and Teacher, have washed your feet, you also ought to wash one another’s feet” (John 13:14). Seeing such humility is truly astonishing.

Why reflect on Jesus’ humility here? Humility and love were key factors powering the growth of the creation science movement. I knew Dr. Duane Gish fairly well. He is remembered for the voluminous number of collegiate-level debates that he won and also the consistent Christ-like treatment that he showed to his opponents. I briefly met ICR founder Dr. Henry Morris only a couple of times, but I’m told by many who knew him that a gracious spirit was his most distinguishing characteristic. The same is true for Dr. Gary Parker and numerous other creationist pioneers. The science they presented was convincing—especially the overwhelming geological evidence for a worldwide flood and the intuitive evidence for the design of creatures. But the fact that they “were right” never went to their heads.

As a relatively new Christian, I admired how these founders didn’t come across in a proud, ill-tempered, or dismissive way toward evolutionists and other creation scientists. Their demeanor left me rather, shall I say, astonished…given that all I had experienced in the scientific world up to that time was a vicious one-upmanship between researchers. Creation science’s founders left an example worth emulating.

A few fundamental and distinctive beliefs unite creation scientists. We believe that the Bible is the Word of God. It is inspired, inerrant, able to be reliably translated in a way that’s clearly understandable, the highest authority, and the avenue to know Christ and His truth. We do not believe that nature is the 67th book of the Bible—even though the invisible things of Christ are clearly seen (understood intuitively and through the scientific method) from His workmanship in nature (Romans 1:20). As such, the Bible provides the definitive framework guiding our scientific studies. From Genesis, we know that the Lord Jesus created the universe in six literal 24-hour days with distinct kinds of biological entities and humans made in God’s image only about 6,000 to 7,000 years ago. The biblical framework from which creation scientists view natural history is radically different from the secular interpretive framework of materialistic naturalism and an ancient universe.

As I think about the minority of Christian scientists (and bold non-scientist believers) who hold—without flinching—to a normal interpretation of the Bible, the Philip P. Bliss gospel song “Dare to be a Daniel” comes to mind. The refrain portrays the risk one takes in affirming the central beliefs of creation scientists: “Dare to be a Daniel, Dare to stand alone! Dare to have a purpose firm! Dare to make it known.”

It wasn’t enough for the bold pioneers of creation science to have biblical truth and scientific evidence on their side. Their mission was to win science and scientists back to Christ. Truth surrounded by love is a powerful force, and they used this to great effect in the academic arena. They not only held distinctive beliefs but tried to reflect Christ’s behavior, marked by humility and love. In particular, it was the way they handled scientific disagreements with evolutionists (and between themselves) that made our forerunners in creation science noticeably different.

On the one hand, in the secular academic world anyone who openly resists conforming their beliefs to secular naturalism—and particularly selectionism—is apt to be ostracized. Singling out a fellow scientist for painful treatment because of their rogue thinking is considered justified as being vital for protecting the integrity of the prevailing evolutionary consensus. Academic leaders’ playbook for dispensing professional sorrow includes several effective means. A few actions they regularly attempt are suppressing opposing views by simply ignoring contrary research or killing it through an abusive peer review process; ruining another scientist’s credibility or assassinating their character by public humiliation either in person, in blogs, or in so-called “peer reviewed” papers; and bringing on professional exile by shunning rogue scientists at conferences or in employment.

On the other hand, when early creationists disagreed with evolutionists and each other, they acted differently. I was impressed with how they submitted to these biblical admonitions:

They also took seriously warnings about how Christians should treat “one another” such as do not bite and devour one another, envy one another, provoke one another (Galatians 5:15, 26), or be puffed up with pride with one another (1 Corinthians 4:6).

Our science staff believes that our creationist forerunners pleased the Lord Jesus, and with His help we hope to emulate them. Thus, we’ll guard the tone of our communications even while vigorously advocating for ICR’s distinctive positions. And we’ll endeavor not to weaponize our social media, news articles, videos, and Acts & Facts articles to rebuke others, damage their reputation, or respond in kind to worldly behavior.

Creationists need each other. The biblical and secular frameworks are not only fundamentally different from each other, they are utterly opposed to each other. The evolutionary juggernaut is not invincible, but it’s large and well-funded, and ruthlessly defends its monopoly in education, entertainment, and government. We’d best not lose sight of who our real opponents are.

The truth is creationists need all of the brainpower, all of the research talent, and all of the communication skills within our forces. Looking over today’s company of creation scientists, it’s clear that Christ has assembled highly talented people with critical skill sets from within His church. The diverse gifts are most effective when they work selflessly together, “for in this the saying is true: ‘One sows and another reaps’” (John 4:37). Creationists serve other Christians by providing them with answers to the challenges coming from a huge crowd of secular scientists and skeptics who menace the church today.

A Long-Overdue “Thank You!”

In my short time so far as president of ICR, some have counseled that I must build on, trade in, protect, or advance the ICR “brand” like other ministries nurture their brands. Advised actions to protect our brand, however, seem self-serving and at the expense of other creation science ministries. A better approach is to build on each other’s strengths and, by God’s grace, astound those watching us by trying to demonstrate the humility of Christ.

ICR is one of a few larger creation science ministries. Acts & Facts readers may not be aware that many smaller creation science ministries have for many years been faithfully teaching the truth of creation alongside us. Size of ministry is irrelevant with the Lord Jesus. Some ministries have limited outreach, some have been bruised by attacks of the enemy, and some hold positions that we would find out of date. We all have weaknesses and differences. However, to begin the New Year we would like to say a public “thank you” to some smaller sister ministries that perhaps have rarely been thanked before.

We love and appreciate you.