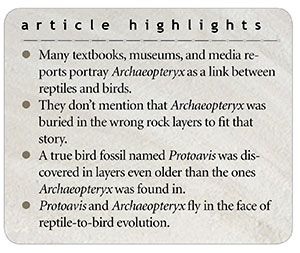 Ask college freshman biology students to name the oldest bird fossil and they’ll probably say the evolutionary icon Archaeopteryx. In that case, you’d hear the wrong answer. The story of which fossil receives the prize for the oldest bird has as many twists as the story of bird evolution itself.

The tale took flight with the 1861 discovery of a lone feather in Germany’s now-famous Solnhofen limestone layers. Just two years later, British anatomist Richard Owen obtained a Solnhofen whole-body fossil with feather impressions for the British Museum. Owen clashed with Charles Darwin by saying that creature changes happen through orderly principles instead of from natural hap-penstance. Both he and Darwin agreed, though, that Archaeopteryx was the world’s oldest bird, and it kept that crown for a century. 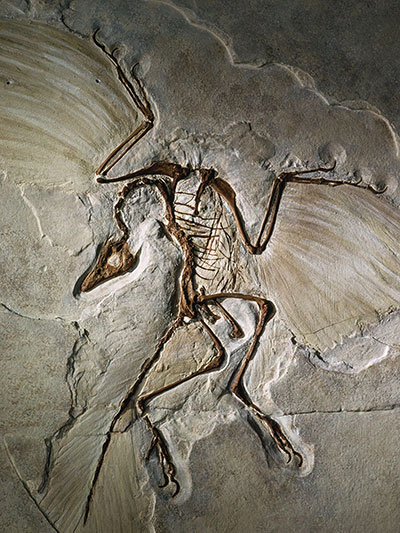 It was discovered only two years after the publication of Darwin’s famous book On the Origin of Species by Means of Natural Selection, and Darwin promoters soon showcased Archaeopteryx as a missing link. To them it represented mostly a bird with reptilian features still remaining from its supposed evolutionary past. English writer and social commentator H. G. Wells wrote in The Science of Life, “As it is, Archaeopteryx is in its general construction a perfect link between the two great groups of birds and reptiles, though more than half-way to modern birds.”1 Headlines reinforce this same supposed link status today,2 even though studies continue to show Archaeopteryx was just a bird.3

Despite its iconic status, this fossil’s geological position is out of sync with evolution. When we factor in the fossils found in Jurassic System rocks outside Germany, the Jurassic Solnhofen limestones place the extinct bird amidst dinosaur layers. According to an increasingly popular evolutionary tale, an unknown starting reptile evolved into dinosaurs. Then some of those dinosaurs—the theropods—later evolved into birds. Theropods and birds both have three forward-facing toes on each of their two legs, but the similarities essentially end there. Birds balance from their knees, while theropod legs swing from the hips like human legs do.

The evolutionary story assumes that natural processes adjusted all the appropriate theropod bones, muscles, and nerves into a bird system perhaps several times over the 186 million years that supposedly spanned the Triassic, Jurassic, and later Cretaceous rock systems. The total lack of an undisputed transition between hip- and knee-walkers counters the evolutionary tale. Likewise, the discovery of short-lived feather protein remnants in the original Archaeopteryx fossil counters the assumed evolutionary time.4

What lower-to-upper fossil sequence would support bird evolution? It needs a reptile-dinosaur-bird sequence from the bottom-up. Ideally, the first bird should occur in Upper Cretaceous layers as the culmination of millions of years of reptilian-ancestor evolution. Instead, most theropods occur in Cretaceous layers far above Archaeopteryx’s Jurassic setting. That’s like having grandparents descend from their grandchildren. Archaeopteryx fossils are positioned too low to tell a perfect evolutionary story. But what if someone found a bona fide bird in even lower layers?

In 1983, paleontologist Sankar Chatterjee described Triassic bird fossils from west Texas. They belonged to a bird kind he named Protoavis. Talk about out of place! The Tecovas Formation from which Chatterjee’s teams collected several Protoavis fossils has an evolutionary age assignment of about 75 million years before Archaeopteryx, which is already too old to fit evolution. No wonder Chatterjee wrote, “From the beginning, Protoavis was received with much skepticism.”5 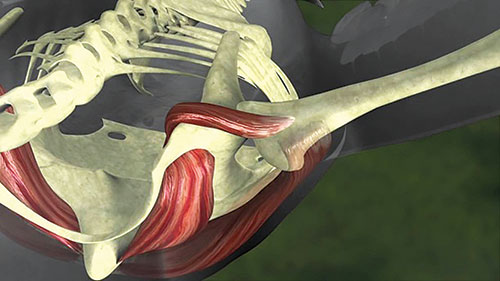 Wing structure of a modern snow goose showing a supracoracoideus muscle and keel-shaped sternum similar to what was found in Protoavis.
Image credit: Copyright © Illustra Media. Used in accordance with federal copyright (fair use doctrine) law. Usage by ICR does not imply endorsement of copyright holder.

Why do evolutionists treat Protoavis with skepticism? Not because of its anatomy. If anything, Protoavis looked more like modern birds than the later-buried Archaeopteryx, which lacked a large keel bone structure in the middle of its chest. Protoavis had a keel-shaped sternum and a shoulder girdle with the supracoracoideus pulley system typical of modern flyers,6 all integrated with its toothy mouth and bony tail. In spite of this, Chatterjee’s colleagues reject or ignore Protoavis because it doesn’t fit theropod-to-bird evolution. Chatterjee still believes that reptiles evolved into birds—he just thinks it happened much earlier than most paleontologists assert. But that’s like having great-grandparents descend from their great-grandchildren.

As of August 2019, the opening paragraph of Wikipedia’s description of Archaeopteryx says, “Older potential avialans [birds or supposed evolutionary ancestors of birds] have since been identified, including Anchiornis, Xiaotingia, and Aurornis.”7 The four-winged Anchiornis must have been a bird because it had feathers. And it must have been deposited only thousands, not millions, of years ago because researchers found feather proteins in it, just like they did in Archaeopteryx.8 All three of the bird-like fossils listed in Wikipedia predate Archaeopteryx by only 10 million supposed years. Protoavis’ 75 million years must make the website entry’s authors too uncomfortable to even mention.

Dinosaurs did not evolve into birds. The imaginary transitions wouldn’t have been able to fly or walk. How could they even survive? Archaeopteryx was not H. G. Wells’ “perfect link” at all. It had the anatomy of a walking, gliding bird with no in-between features such as pre-feathers or lizard hips. And Archaeopteryx was entombed before its supposed ancestors.

The prize for the oldest fossil bird currently belongs to the Triassic Protoavis. Its high-tech flight anatomy and its low-lying rock layer fly in the face of bird evolution’s twisted tale.