New surprises revealing complex bio-engineering keep emerging as evolutionary scientists continue to unwittingly obey the biblical command to "observe the ant"(Proverbs 6:6; 30:25). The latest bio-engineering discovery is that a key component of ant colony survival is based on sound (acoustic) communication systems.1

One of the long-standing paradigms of animal communication is the use of airborne chemical messages called pheromones. Ants use pheromones to leave chemical trails that can be followed by other members and to also identify which nest an ant is from, along with its social status in the colony. Now, scientists can add yet another layer of complexity and communication in ant colonies based on acoustics.

Scientists have been studying a type of ant commonly found in Europe. This ant has a specialized appendage on its abdomen that it strokes with its hind legs to create sound signals. Other ants can detect and process these signals, resulting in various complex social responses that are key to survival of the colony. Several years ago, researchers found that, in adult ants, these signals can act like an emergency beacon when an ant is threatened by a predator.2

If the discovery of this complex signaling in adult ants was not enough of a surprise, scientists have now determined that developing larvae back in the nest also use this technique, which is important for the ant colony's survival. Everything in an ant colony is performed in an orderly manner. 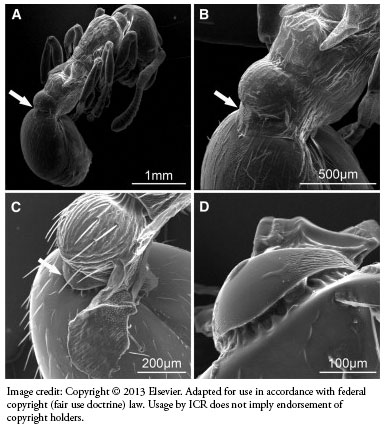 It is also noteworthy that the acoustic signals are not performed in isolation, but co-processed along with other pheromone sensory signals using complex internal bioprocessing systems. Several other news articles from the Institute for Creation Research have discussed the complexity of ant colonies and their management through highly engineered bioprocessing systems.3,4,5

The combination of various sensory communication and processing systems are a clear example of an all-or-nothing suite of features referred to as irreducible complexity. All the ants would die in one generation if you remove any one of these features: 1) early maturing abdominal acoustic appendage, 2) instinct to "strum"it, 3) sensors in adults to detect it, 4) ant brains to interpret the sounds, and 5) the instinct to protect the mature larvae.

These new discoveries are amazing testimonies to the intelligence of the powerful Creator who engineered these remarkable living systems that utterly defy evolutionary dogma.

NEWS
Inside August 2021 Acts & Facts
Can a merciful God create parasites? How do diamonds confirm biblical history? Why won't the gospel die? And why is consensus thinking anti-science?...
BY: STAFF WRITER