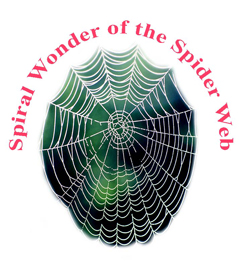 Here's an easy recipe: take food, metabolically convert it into sticky glue. Then, allow air to contact it while rapidly stretching it into an impossibly narrow, nimble thread as strong as steel. There you have it—spider silk. We tend to take for granted the incredible detail and beauty of a typical spider web. The Creator designed most species of spider to secrete a special thread (web) that scientists have long appreciated and have attempted to emulate. They have found that web strands are comparable in strength to fused quartz fibers. Zoologists discovered that spiders have anywhere from one to four pairs of spinnerets located in the opisthosoma (abdomen) of the spider (the normal number are three pairs). In addition, there are along with the spinnerets seven silk glands, each making a strand for a unique purpose. Many dozens of tiny tubes lead to these specially designed abdominal glands. In a process not completely understood, a special scleroprotein-based substance is released as a liquid which then seems to harden as it is pulled from the spinneret.

One silk gland produces thread for cocoons and another for encapsulation of prey. The two seem to be the same, but they require different especially designed silk. Other glands make the walking thread so the spider doesn't encumber herself, while another makes the sticky material that captures prey. We are unable to see some of the finer threads unless the light is reflected just right. In fact, during World War II, only spider silk was fine enough to be used for cross hairs in some bomb sights. However, spider silk is also robust with a tensile strength fives times that of steel and elasticity, able to stop a lumbering bumblebee at full speed. Some scientists describe the web patterns much like those mirrored by many flowers in sunlight (UV light). Insects that are searching for nectar see the "flower" patterned web in the UV spectrum and fly unwittingly into the sticky trap.

Some spiders even use a long trailing thread for a process called "ballooning." The creature secretes a line and allows the wind to carry it—and the spider—aloft for places unknown. Spiders have landed on ships far out at sea.

Evolutionists, true to their worldview, call this amazing ability of the cheliceriforms nothing more than a unique adaptation. Two secular authors state,

Each spider engineers a style of web characteristic of its species and builds it perfectly on the first try. This complex behavior is apparently inherited.1

Earliest evidence of a spider's silk-spinning activity is a fossil discovered from "380 million-year-old" sedimentary rocks near Gilboa, New York.2 It is clear that spiders—along with their silk-producing parts—have always been spiders according to the fossil record and the creation model.