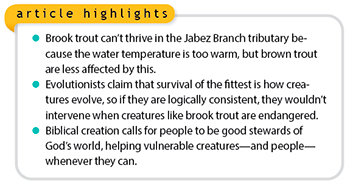 Should a freshwater stream be restored to make it habitable for a failing fish population such as brook trout?1 It makes sense that creationists proactively care about biodiversity and environmental stewardship, but why should evolutionists care?2 These real-world questions are illustrated by Maryland’s Jabez Branch, a tributary of the Severn River in Maryland. Jabez Branch is the only stream in the state’s Coastal Plain that is—or maybe was—home to brook trout.1

Unlike the nonnative and more adaptable brown trout [Salmo trutta], brook trout [Salvelinus fontinalis]…are typically found in clear, cold streams and rivers in the Piedmont region or higher elevation headwaters of the [Chesapeake] Bay watershed. Downstream, in the Coastal Plain, the water gets too hot in the summer for brook trout to survive. Jabez Branch, however, has been an anomaly, with cool springs feeding it and the shade-casting boughs of forest along much of its banks.1

But brown trout are less sensitive, so they compete better in such circumstances. According to repeated monitoring done by electrofishing, this causes population decline of brook trout—they must detect and abandon overly warm streams.1,3

But, from the brown trout’s—or an evolutionist’s—perspective, who cares if warmed stream waters discourage populational success for local brook trout?

Creationists appreciate how God values biodiversity, as Noah’s Ark illustrates.2 But how can evolutionary thinking promote biodiversity? Evolutionists have no moral basis for valuing biodiversity.2,4

Yet the sophistic phrase “survival of the fittest” illustrates the defect of logic called tautology (i.e., redundancy fallacy, proving nothing) because evolutionists define populational fitness by survival, so “fitness” really means that whoever survives was fit (or “lucky”) enough to survive—in other words, the survivors survived.4

Also, as ICR’s Dr. Randy Guliuzza has amply documented, the phrase “natural selection” is an animistic/magic-word synonym, depicting a personified nature that somehow environmentally prefers (favors or disfavors) to select one animal over another.4

Worse, survival-of-the-fittest terminology is harnessed to rationalize terrible cruelties, such as the eugenics movement,4 as if might makes right—a fact historically illustrated in World War II by both the Nazi Germans and the Imperial Japanese.5

More The Natural Direction of Life Is Degeneration, Not Evolution

People Not Quite as Clever Anymore
Wouldn't it be interesting to compare our cleverness to that of our ancestors? It would only be possible if today's researchers could use the...
BY: BRIAN THOMAS, PH.D.

Fungal Parasitism Marked by Gene Loss, Not Gain
Certain types of fungi can be parasitic to both plants and animals. Two new studies show that this has developed, in part, by a loss of genetic information—not...
BY: JEFFREY P. TOMKINS, PH.D.

Do Bird Embryos Show Evidence of Evolving from Dinosaurs?
The majority of zoologists and vertebrate paleontologists believe that birds are actually flying dinosaurs. This even includes the world’s smallest...
BY: FRANK SHERWIN, D.SC. (HON.)

Out-of-Africa Theory Contradicted by Israeli Fossil
The standard evolutionary theory is that humans evolved from a chimp-like ancestor about 3 to 6 million years then migrated out of Africa about 100,000...
BY: JEFFREY P. TOMKINS, PH.D.
The Latest
NEWS   ACTS & FACTS   PODCASTS