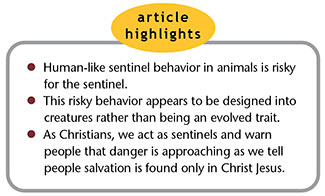 Watch out! Dangers lurk everywhere—these are surely perilous times.1 One of the apologetics-exhorting themes in Jude’s epistle is the need to beware of—and to forewarn others about—scoffers who distort and resist God’s truth, as we contend earnestly for it.2

Even bird populations must watch out for lurking hazards and airborne threats in their nesting neighborhoods and during migratory stopovers. Creatures such as wolves and hawks threaten them on a daily basis.3,4

One habit that prey populations often exhibit is the practice of appointing a sentinel—a dedicated “watchman on the wall,” so to speak.5,6

One bird is assigned the role of warning (called alarming) the rest of the flock that is foraging or otherwise occupied. In some groups, sentinel duty is rotated, while in other groups the responsibility is sorted as a division-of-labor assignment, such as male birds more often serving as sentinels.6-8

This behavior is quite puzzling to evolutionists, who assume that ultimately there needs to be a selfish advantage for every activity, as opposed to some creatures behaving altruistically because that is what they do or are programmed to do.7,8

Sentinel behaviour, where individuals take turns to watch for danger and give alarm calls to approaching predators, has been observed in a number of animal societies. However, the evolutionary causes of this behaviour remain unclear. There are two main, competing hypotheses regarding the evolution of sentinel behaviour. The first hypothesis is that it is a cooperative behaviour, where group members benefit from the detection of danger but share the workload of acting as a sentinel. The second is that it is a safe, selfish behaviour. Under the second hypothesis, once an individual is satiated, being a sentinel is safer because sentinels can detect threats more readily and can therefore escape from predators faster.7

But what are the observable facts about sentinels? Is their service somehow a selfish benefit when they serve as their group’s watchmen? Or are some sentinel creatures actually behaving in altruistic ways, protecting the group they belong to at greater risk to themselves?

We examined whether sentinels are safer than foragers in a wild, free-living cooperative bird (the pied babbler, Turdoides bicolor) with a well-described sentinel system. We found that sentinel behaviour was costly because (a) sentinels were targeted by predators more often, (b) they were further from cover than foragers, and (c) they took longer to reach the safety of cover following a predator alarm.7

Animals exhibit some behaviors that if practiced by humans would be called selfish and cruel, as well as other behaviors that we would call altruistic and self-sacrificing.

These results suggest that individuals do not become sentinels because it is safer. This is the first study to demonstrate that sentinels are at greater risk of predator attack than foraging group members and suggests sentinel activity may have evolved as a form of cooperative behaviour.7

For humans, giving a warning can be a moral duty. Moral accountability is unique to human behavior because only we humans—being uniquely made in God’s image—are Earth-dwelling creatures who have true moral accountability for our activities.9

It’s important to sound the alarm early when doing so can prevent or mitigate an approaching disaster. Sometimes the messenger of bad news pays a price for delivering an unwelcome message, but it’s better to sound the alarm—hopefully early enough to prevent harm—than to delay a warning that leads to damage-control problems that grow costlier with time.1,2,5,6

Caringly sharing the gospel of redemption in Christ is the best warning of all, even if it involves costly risks.5