The Phoenix Mars Lander has successfully arrived and is, as of this writing, examining the surface of the Martian planet. The objective of the Phoenix Lander is two-fold: first, to explore geological evidence for water; and second, to find a "habitable zone" between soil and ice that may contain microbial life. The five previous successful American landings on Mars have produced no evidence of life or even the conditions that may support life, but scientists are evidently optimistic that it must be there somewhere.

We have spent millions of dollars in our efforts to gather more data about other planets. Now we are spending millions more to look for life on Mars. Because the planet has been discovered to be inhospitable to any life, our expectations have been lowered dramatically. Whereas once we were entertaining thoughts of Martians invading earth, now we have relegated our investigation to merely looking for evidence that Mars may have once supported living organisms. 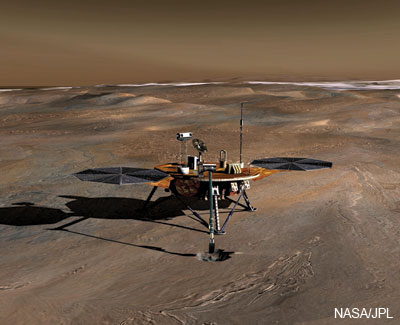 Why would we stubbornly keep looking for life forms that refuse to materialize? Consider these events. First, Darwin published On the Origin of Species in 1859. Within ten years, the evolution revolution took hold and academicians began teaching that all life originated not from God, but from nature itself. When you add to this the concept that the universe is vast and might contain countless planets to accompany its countless stars, the ingredients or a recipe for alien life are in place. Also, since Mars is relatively similar to the earth in size and distance from the sun, why not begin the search with Martians?

Certain visible features (and perhaps some wishful thinking) led many early astronomers to believe that liquid water, a key ingredient for life as we know it, was on the surface of Mars. However, the first official demotion of alien expectation was in 1965, when the Mariner 4 performed the first flyby of the planet. The "aquatic" features turned out to be nothing more than mirages.

On earth, the N2 is inert, so it does not react with sensitive lung tissues. The CO2 and especially H2O vapor provide a vital greenhouse shield. Mars does not have this, nor does it have enough oxygen for life. In fact, it has none of the unique atmospheric attributes essential to life on earth, including an ozone layer. Radiation is so intense on the planetary surface that aside from the cold anoxic environment, this alone would suffice to destroy the very molecules of life. That is why researchers are digging deeper to look for life…or at least an extinct incubator for a life that is long gone.

A straightforward reading of Genesis 1 describes a universe with life that is bound to earth. In it, the earth is described as uniquely constructed to support life. Scientific investigation has confirmed this; the prospects for Martian life appear slim. On our home planet, however, there is strong evidence for a well-designed, robust atmosphere and a planetary makeup that is just right.

Evolutionary scientists will keep looking for extraterrestrial life because their theory predicts that it should exist. But why is there such a conspicuous lack of evidence for it? The Genesis account of creation remains consistent with what we observe and is the only satisfactory explanation for the presence of life…on earth.