Recent years have witnessed many revolutionary discoveries of original tissues in fossils. Each new find challenges the widely held notion that fossils formed millions of years ago. After all, lab tests repeatedly show proteins and other biological materials lasting no longer than hundreds of thousands of years—millions are out of the question. As a result, these fossils clearly look like recent deposits. What tactics do evolutionists use to accommodate these original organic remains into their entrenched belief in deep time?

One tactic is to simply turn a blind eye to the whole fossil tissue issue. A possible example of this occurred when an ICR employee attended a 2010 debate featuring the late atheist and evolutionist Christopher Hitchens. After the event, the employee asked Hitchens what he thought of blood vessels recently found in Tyrannosaurus rex bone?1 Hitchens replied that he knew nothing about it.

His ignorance conveniently insulated him from having to reconcile data that refuted his secular view of history. How could such a prominent author on origins topics have for so long "missed" all hints of paleontology's most game-changing discoveries? Shouldn't an expert be well read in the very subjects he debates?

But secularists who do at least look at the soft tissue fossil reports deploy another tactic. In response to the recent discovery of original protein inside tiny dinosaur bones from China, Smithsonian Institution paleontologist Hans-Deiter Sues cited contamination.2 Supposedly, the proteins in question recently "snuck into the fossils" from some source other than the fossilized animal.

He told Science NOW, "You can never really totally rule out contamination."3

Technically, his statement is scientifically accurate. But it can lead to absurd conclusions. If one can never totally rule out contamination, then one can always excuse the data by claiming it—playing the convenient "contamination card"—even when it defies common sense.

For example, one can never totally rule out the possibility that my plate of dinner is contaminated. Instead of it coming from my kitchen, another person might have cooked the identical meal elsewhere, then secretly set the full plate of food on my table. Though possible, this contamination speculation is so unlikely that it can be ruled out on the basis of its extreme implausibility.

What quality of soft tissue fossil data would similarly refute claims of contamination beyond reasonable doubt?

This chart contrasts the maximum time required to convert bone collagen into dust with ages that the secularists themselves assigned to collagen-containing fossils. The tiny red column represents the maximum age of bone collagen determined by repeated decay measurements. It assumes that unrealistically cold temperatures preserved collagen for as long as one million years.

The blue columns represent seven fossils with collagen or similar protein. These examples build seven arguments favoring the view that fossils formed only thousands of years ago. Secular scientists reported each of these finds in evolutionary journals.4 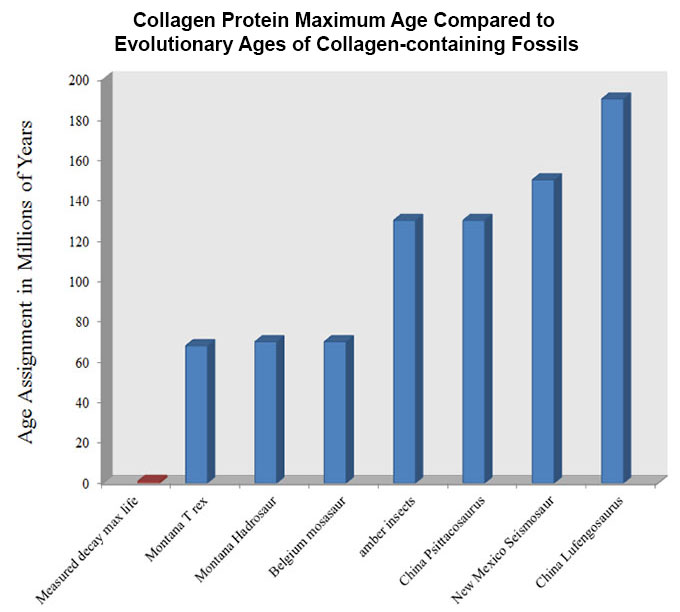 What are the odds that contamination infected so many varied fossil proteins from so many different places?

Instead of following the evidence where it clearly leads, some use broom tactics to sweep away scientific challenges to secular beliefs. Sometimes human will—not reason—drives conclusions and behavior. Some ignore the fossils, ignore protein decay, or claim contamination. But all three tactics create far more problems than they solve. The most straightforward solution follows this fossil evidence straight to biblical origins in Noah's recent Flood.