Probably no other scientist has had to face as many social barriers as George Washington Carver, the black American botanist noted for revolutionizing agriculture in the southern United States. He was born towards the end of the Civil War to a slave family on the farm of Moses Carver. As an infant, he and his mother and sister were kidnapped by Kentucky night raiders.

It's unclear what happened to his mother and sister, but George was rescued and returned to the Carvers, who raised him and his brother James. He grew up in a deeply segregated world, and very few black schools were available in the South. But his desire for learning prompted him to persevere, and he earned his diploma from Minneapolis High School in Minneapolis, Kansas.

Entering college was even more difficult, but he was eventually accepted at Simpson College in Indianola, Iowa, to study art. In 1891, he transferred to Iowa State Agriculture College in Ames (now Iowa State University) to study botany, where he was the first black student and later the first black faculty member. While there, he adopted the middle name "Washington" to distinguish himself from another George Carver. He received his undergraduate degree in 1894 and his masters in 1896, and became a nationally recognized botanist for his work in plant pathology and mycology. After receiving his masters, he joined Booker T. Washington at the Tuskegee Normal and Industrial Institute (later Tuskegee University) in Alabama to teach former slaves how to farm for self-sufficiency.

Carver revolutionized agricultural science with his cultivation of soil-enriching crops, such as peanuts and soybeans, to revive earth that had been depleted of nutrients from cotton farming. He discovered over 100 uses for the sweet potato and 300 uses for the peanut, including beverages, cosmetics, dyes and paints, medicines, and food products. He conducted numerous research projects that also contributed to medicine and other fields, and used his influence to champion the relief of racial tensions.

He was offered many honors and substantial wealth from patents, but Carver chose not to patent his discoveries: "One reason I never patent my products is that if I did it would take so much time, I would get nothing else done. But mainly I don't want my discoveries to benefit specific favored persons."1

Frugal in finance and humble in character, Carver was undoubtedly a deeply devoted Christian. He attributed inspiration of his work to God,2 and his studies of nature convinced him of the existence and benevolence of the Creator: "Never since have I been without this consciousness of the Creator speaking to me….The out of doors has been to me more and more a great cathedral in which God could be continuously spoken to and heard from."3

Carver died January 5, 1943 of complications from injuries he incurred in a bad fall. His life savings of 60,000 dollars was donated to the museum and foundation bearing his name. The epitaph on his grave on the Tuskegee University campus summarizes the life and character of this former slave, man of science, and man of God: “He could have added fortune to fame, but caring for neither, he found happiness and honor in being helpful to the world.” 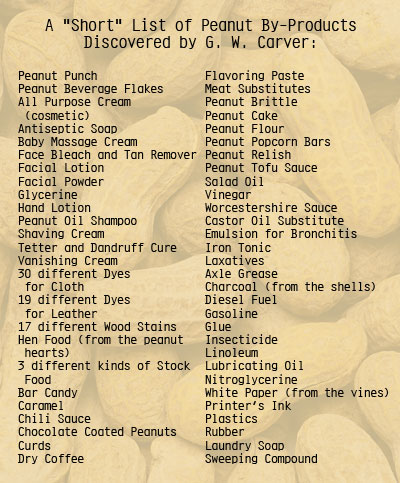