How did our solar system get here? Those who dismiss any possibility of creation imagine ways that pure natural forces might set in motion the sun, each unique planet and their moons. New computer modeling results seem to show promise—but only when they overlook or assume obvious and important factors.

According to the nebular hypothesis, the solar system’s planets formed from a condensing, swirling cloud of dust called a nebula. Publishing in The Astrophysical Journal, Carnegie’s Alan Boss and Sandra Keiser showed how a supernova’s shock wave might have produced dust disc rotation around an early sun.1 Their computer models illustrate the effects of such a collision with a giant theoretical nebula.

The research duo tried to crack the riddle of how a nebula could add the short-lived radioactive isotopes observed in meteorites. Nebulas by themselves don’t have enough gravity to make them, so secularists imagine the required extra pressure coming from a nearby star explosion.

Boss and Keiser input an array of factors into their models, including the density of the nebula’s gas cloud, and how fast and at what angle the shockwave approaches. Last year’s results showed that the gas collision could have pressed folds called R-T fingers into the modeled cloud. These folds supposedly injected isotopes into gases that would eventually compress to form meteorites.

Their latest results showed that some of these same finger-like folds swirled once they entered the cloud. Alan Boss told Carnegie Science, “The very fact that a rotating disk formed around our proto-Sun may have been a result of the spin induced by this shock front.”2

How can anyone know with scientific certainty that “a rotating disk formed around our proto-Sun?” Did any scientist observe this “fact?” It’s really not a fact at all, but instead an assumption—this whole exercise borrows a bunch of similar assumptions. 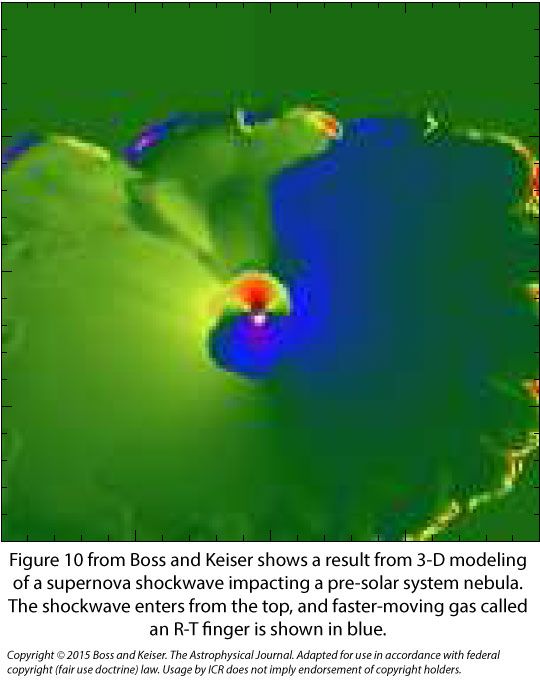 Boss said, “Without spin, the cloud disappears into the proto-Sun. With spin, a disk suitable for planet formation is created.”2 Their models showed that when a supernova shockwave with a certain velocity collides with a rotating nebula of a certain density, those folds wind around the proto-Sun to help create motion that might explain how the planets got their revolutions and positions.

But the model only works if the nebula is already rotating before the shockwave strikes it. The study authors wrote, “It is important to note that when the initial 3D cloud is not rotating at all, i.e., when Ωc = 0, no obvious disks form at all, in spite of R-T fingers being present.”1 So, the simulation does not actually explain the initial rotation of the nebula. Their model simply assumes it was already in place and spinning close to the right rate.

These models also assume a supernova occurred near enough, provided just the right force to form swirling R-T fingers, and collided with the assumed nebula. Astronomers have not identified a suitable supernova remnant. Without a fossil star or some kind of actual evidence, this supernova explanation remains pure speculation.

But even granting that R-T fingers really do explain some spin, the model still needs to explain how to obtain just the right spin. Long before this research, when comparing the solar system’s planets with those found far away, space scientist David Coppedge wrote for ICR, “Scientists realize now that stellar dust disks are not planetary maternity wards, but conveyor belts of doom.” Chances favor proto-planets spiraling into a proto-Sun and simply burning up.

The nebular hypothesis faces other huge problems. Since the outward force of gas pressure is normally much stronger than the inward pull of gravity within a nebula, how would the cloud collapse in the first place? Also, magnetic fields and conservation of angular momentum tend to prevent the collapse of a nebula into a star. Plus, particles don’t stick together to form planets nearly as often as they destroy each other in collisions.

If all the inner planets formed at the same time from the same spinning nebula, then how do we account for their rich diversity? They have different masses, compositions, densities, rotation periods, and different atmospheres. Each body looks like it was uniquely crafted.

Secularists do not have a good explanation for the backward rotation of Venus. In the secular scenario, the solar system is supposed to have formed from the collapse of a rotating nebula. The natural expectation of this would be that all planets would rotate in the same direction at about the same rate, and they would all have very little axial tilt. Venus is the worst offender to this concept, since it rotates exactly the opposite of what the evolutionary models require. But we expect such diversity in the biblical view.4

Plus, Uranus rotates on its side, unlike the other planets. Did the Lord put all these planetary peculiarities in place on purpose? Theoretical R-T fingers answer none of these nebular hypothesis deal-breakers. Plenty of technical expertise went into this modeling study, but it falls exceedingly short of explaining how our solar system actually came into being.