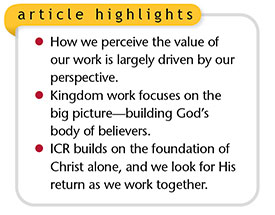 During construction of the ICR Discovery Center for Science & Earth History, I spent a lot of time working with various crews of artists and craftsmen. One day as I watched three men shoveling dirt into wheelbarrows, I stopped and asked what they were doing. The first said, “I’m clearing this dirt and dumping it on the far side of the worksite.” The second man shook his head and said, “I’ve got a large family, so I’m putting food on the table and a roof over our heads.” The third man, after quickly surveying the worksite, surprised us all when he stated, “I’m helping to build a beautiful new science museum. It’s gonna be great.”

Perspective can be a funny thing. The first man viewed his work as drudgery, while the second saw it as a means to an end. The third man, however, saw his efforts with a greater sense of purpose. While each man was technically correct, how he perceived his labor made all the difference.

The immature believers in Corinth needed a similar reminder from the apostle Paul. Several factions had risen up, with some claiming allegiance to the teaching of Apollos, others to Paul, and still others to the apostle Peter (1 Corinthians 3:4, 22). But Paul warned against “boast[ing] in men” (v. 21). Rather, he emphasized teamwork between his fellow ministers who labored for a far greater purpose. Paul could have described his work in terms of the exhausting travel, preaching in hostile synagogues, and the scourgings, beatings, and jail cells that often followed (2 Corinthians 11:23-27). But he looked beyond his current difficulties to see the big picture. “I planted, Apollos watered, but God gave the increase….For we are God’s fellow workers; you are God’s field, you are God’s building” (1 Corinthians 3:6, 9).

It was vital for the Corinthians to recognize the importance of their co-labor for “God’s building”—the believers who comprise the church. Paul reminded them, “Do you not know that you are the temple of God and that the Spirit of God dwells in you?” (1 Corinthians 3:16). And while they might labor separately, often apart for years at a time, Paul reminded them they were not in this work alone. “I have laid the foundation, and another builds on it. But let each one take heed how he builds on it” (v. 10). No structure will survive if it’s not first built on a firm foundation, and such is true for “God’s building,” for “no other foundation can anyone lay than that…which is Jesus Christ” (v. 11). No church or Christian ministry can claim to be genuine if it fails to proclaim and worship the Lord Jesus Christ for who He claims to be in all His fullness.

Even with a sure foundation, the danger of heresy and apostasy—rampant today just as in Paul’s day—can ruin the work. Paul likened this to using building materials of “gold, silver, precious stones” versus “wood, hay, [and] straw” (1 Corinthians 3:12). Our works will be tested one day by the fire of Christ’s judgment seat (2 Corinthians 5:10), and only those of good quality and value will endure.

The Institute for Creation Research takes this charge very seriously. Our ministry is neither mundane nor routine—it’s God’s work, and we would be blessed by your support. God will “give the increase” (1 Corinthians 3:7) as we labor together to proclaim the truth of our Creator, Jesus Christ.