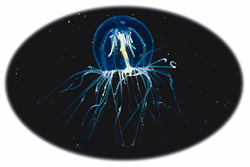 Where did the jellies (and the 10,000+ other species of the Cnidaria) come from? According to three evolutionary zoologists, "The origin of the cnidarians [jellyfish, sea anemones] and ctenophores [comb jellies] is obscure. . . ."1 Creation scientists see jellies as always being jellies, both today and in the fossil record.

The case for design is "clearly seen" (Romans 1:20) throughout the cnidaria (e.g., jellies having two peculiar interconnected nerve nets and a hydrostatic skeleton). This includes a tiny lethal device called the cnidocyte that contains a nematocyst—a stinging, container-like structure. Swimmers who brush up against long beautiful tentacles of the Portuguese man-of-war (class Hydrozoa) containing many batteries of nematocysts risk serious blistering injury or even death. The sea wasp (class Cubozoa) off the Australian coast has complex eyes and is one of the deadliest creatures on earth. The venom of a single sea wasp is more potent than a cobra's, and can kill over 50 people. But no one told the sea turtle that eats large amounts of these delicious cubozoans.

Recently, a jelly was discovered with red glowing appendages, supposedly to lure prey.2 Although some are known to undergo bioluminescence (see Origins Issues, "Living Light," Acts & Facts, January 2003), this unique genus (Erenna) produces two colors (blue-green and red) by two different methods: bioluminescence and fluorescence. Another discovery of a unique jelly—one having no tentacles but four to seven fleshy arms—was found in deep water off the coast of California.3 The role of this creature, nicknamed "big red," in the ocean ecosystem is largely unknown.

Because jellies are mostly water, one would not expect to find fossils of them, especially with the traditional evolutionary explanation of gradual fossil formation. Once they are washed ashore, jellies immediately begin to decompose—with or without the brutal sun—into a slimy, gelatinous mass. But in 2002, unmistakable jellyfish fossils, some 50 centimeters in diameter, exhibiting "features nearly identical to those observed in modern scyphozoan strandings," were found in Wisconsin.4 This obviously means they had to be rapidly and catastrophically buried under conditions like . . . a flood perhaps? Evolutionists are aghast at such a suggestion and instead propose, "Because there were not any birds back then [500 million years ago], the carcasses remained stranded until they were buried by subsequent storms."5 But the jellies wouldn't last that long—they're mostly water. The satisfying creation adage of "floods forming fossils fast" applies here.