Monuments of Catastrophe from Mount St. Helens | The Institute for Creation Research
Skip to main content 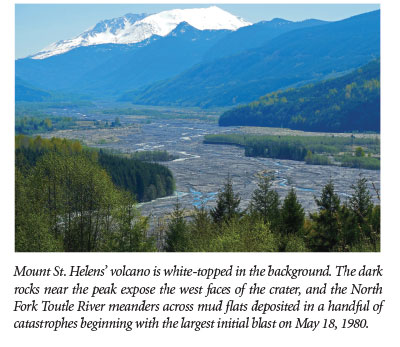 This spring I was able to visit Mount St. Helens while speaking at a string of ICR events in the Washington state area. In and around the volcano I saw powerful monuments of the quick geologic work catastrophes can accomplish.

Long-time creation speaker and author Paul Taylor conducted a tour that included the blast zone of the May 18, 1980, eruption. He and his wife Geri now manage the Mount St. Helens Creation Center on highway 504, the main road leading to the volcano from the west. Mr. Taylor did a great job showing our group the results of all the steam, ash, pulverized rocks, flung-far-afield forests, pyroclastic flows, and mudflows that overwhelmed the valleys north of Mount St. Helens in 1980 and in catastrophic events some years later. 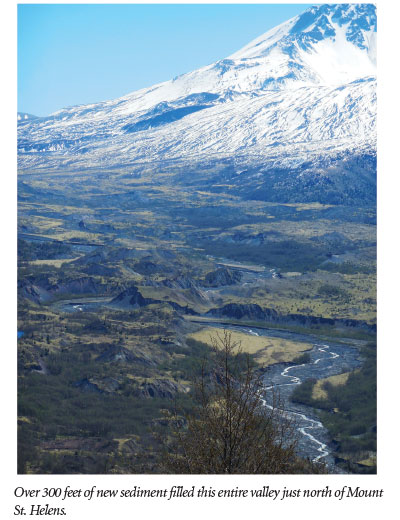 The first monument I saw was the crater itself atop the mountain. Seen from miles away, it towers above the hilly landscape like a bright white pyramid. In the spring of 1980, molten material from deep beneath the earth pushed upward, creating a big bulge on the north side of the peak. Soon, the rock could bend no more, and it gave way in a giant landslide. This released an explosion of hot, pressurized fluid like a cork popping off a champagne bottle. In minutes, Mount St. Helens’ peak became a huge crater.

The earth vomited steam and ash, which quickly produced a debris flow that filled the Toutle River valley with over 300 feet of sediment. Initially, debris flew at over 100 mph, but when its pace slowed enough, material suddenly dropped out of the sky. It landed in lumps, leaving hummocks that are several stories high. Now, over 30 years after the initial blast, alder trees in the small valleys stand over those hummocky tops, and beaver dams have generated ponds with lively insects, frogs, fish, and birds.

Just two years after the big blast, a sizable new lake had already accumulated near the base of the mountain. On March 19, 1982, a moderate explosion initiated an eruptive episode that melted snow and caused muddy water to overwhelm a natural dam, releasing a catastrophic mudflow that gouged dozens of feet through the two-year-old deposits.1 It even scoured some 500-year-old solid rock beneath that. I marveled at the still-steep-sided walls that this 1982 mudflow carved in a single day. 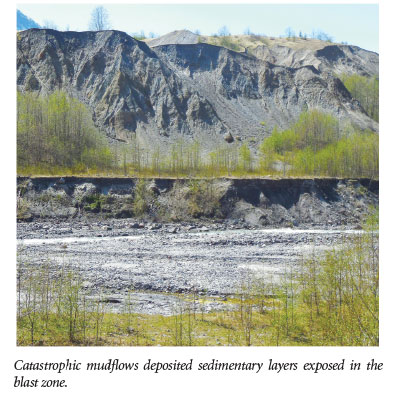 Mr. Taylor told us that he once overheard a park official giving a tour while overlooking this 33-year-old Toutle River canyon. One participant asked the official when the canyon formed, and he replied that decades of erosion must have carved it. His answer may reflect secular geological stories about slow, gradual, everyday processes, but certainly not actual history. The catastrophic mudflow that formed the steep-sided canyons at Mount St. Helens was not a slow, gradual, or everyday event. These monuments suggest that catastrophic events may explain geologic features elsewhere, too.2

The 1980 mudflows deposited sediments that hardened into clearly defined layers of sedimentary rock within two years. Could a larger overwhelming catastrophe have deposited the vast slabs of sedimentary rocks that rest on all the world’s continents? At Mount St. Helens, a single 1982 mudflow carved out a whole new cliff-sided canyon in hours. Could other canyons and cliffs around the world that have the same appearance as Mount St. Helens’ canyon represent catastrophic erosion events, only on an unimaginably greater scale?

A park sign at the hummocky trail illustrated the last monument to quick geologic work. It reads, “Finally, dacite formed the ‘bulge’ in the spring of 1980, and built the lava domes from 1980 to 1984.” Dacite is a type of lava rock with high silica content, making it thicker and difficult to flow when molten. The lava flows did not totally stop in 1984, and another layer oozed out in 1986. Ten years later, ICR collected some of the 1986 dacite rock and sent three samples to a standard laboratory for K-Ar (potassium-argon) radioisotope dating. In 1996, geologist Steve Austin published the results, which showed “ages” from 340,000 to 2,800,000 years for this ten-year-old rock.3 Thus, isotopically “old”-looking rocks can form in a single day, giving another good reason to doubt K-Ar “ages” of millions of years for rocks found anywhere in the world.

So, if you ever visit the beautiful state of Washington, be sure to consider the monuments of catastrophe—catastrophic sedimentation, catastrophic canyon carving, and instantly “old”-looking radioisotopes, all at Mount St. Helens.

Image credit: Copyright © 1980 USGS/R. Krimmel. Adapted for use in accordance with federal copyright (fair use doctrine) law. Usage by ICR does not imply endorsement of copyright holder.