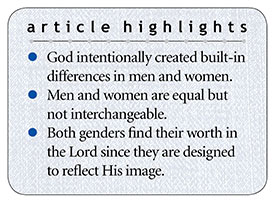 The issue of gender is a frequent news topic. What is the Christian’s position on this issue, and what does science document? Echoing Genesis 1:27 and 2:24, Jesus said, “From the beginning of the creation, God ‘made them male and female.’ ‘For this reason a man shall...be joined to his wife, and the two shall become one flesh.’”1

From this and other passages, the Christian church has always taught the gender complementarity concept—that God designed men and women for different corresponding social roles. This is also revealed in both the physical and psychological sexuality-compatible roles of males and females.2

Both genders find their worth in the Lord since they are designed to reflect His image.

Genetically, except for enucleated (cells without a nucleus) blood cells, every human body cell is either male (XY chromosomes) or female (XX chromosomes). All healthy humans begin life with sex chromosomal differences: the Y contains over 200 genes, of which 72 code for proteins, while the X contains over 12 times as many, fully 874 genes. After a zygote (a fertilized egg) is formed, thousands of genetic differences are created due to an epigenetic process called imprinting. This system turns off a wide variety of genes in males and a wide variety of other genes in females depending on whether the gene came from the father or the mother. The result is that many genetic differences exist between the sexes well before birth.3

These male-female genetic differences have profound ramifications in medicine. For years, only males were generally tested to determine proper drug dosages. Then it was discovered that the popular sleep drug Ambien is metabolized differently in females. Consequently, women initially obtained about twice the proper systemic dose, resulting in some female users being overmedicated, and this produced a rash of traffic accidents. One reason for drug dosage differences is due to the major hormone variations between males and females.

Adult males and females also have different physiological reactions to alcohol due to variations in alcohol dehydrogenase—a detoxifying enzyme. Alcohol dehydrogenase breaks down ethanol, and as a result females exhibit higher alcohol metabolic rates than males. In other words, liquor tends to have a stronger effect on women.

Even sleep cycles tend to be different. Females tend to go to sleep earlier, wake up earlier, and are more active in the morning than males.4 This fact has an adverse effect on boys and is one of several reasons for their poorer school performance compared to girls from first grade through college.

Occupationally, as a whole, women tend to make better neurosurgeons due to their superior fine-muscle coordination, and men make better diesel mechanics due to their superior gross-muscle coordination.5 Women lean toward careers that focus on people, like teaching and healthcare. Males tend to go into careers that involve working with things, such as manufacturing and agriculture.

Females tend to choose careers with more personal reward even though the pay may be relatively lower. Males tend to choose better-paying careers over those they might otherwise prefer, with income often being a major consideration.

Genetic and other research continue to find evidence of built-in differences in males and females, confirming the biblical record.

Genetic and other research continue to find evidence of built-in differences in males and females, confirming the biblical record about the implications of God separately creating human males and females for slightly different, but compatible, roles. Together, they reflect His image.