ICR News previously reported evidence of Ice Age habitations in the English Channel.1 Fishermen and, more recently, researchers have dredged human artifacts and Ice Age animal bones such as mammoth teeth from the depths of the North Sea, which separates England from the European mainland. Now, investigators have begun mapping stone and ancient landform structures on and below the sea floor and are more seriously trying to piece together the clues.

Dr. Richard Bates, a geophysicist at St. Andrews University in Scotland, called the sunken civilization "Doggerland" after the United Kingdom's east coast Dogger Banks. He said in a university press release that "we have found many artefacts and submerged features that are very difficult to explain by natural causes, such as mounds surrounded by ditches and fossilised tree stumps on the seafloor."2 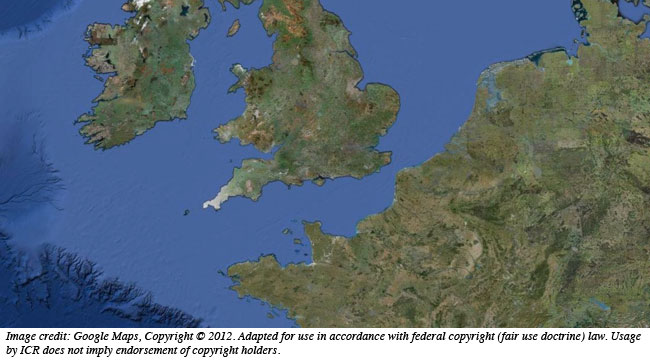 Seismic scans, taken in cooperation with oil companies, revealed ancient rivers and valleys that are now submerged. The researchers began reconstructing the ancient area's "rivers, lakes, hills, coastlines and estuaries."3 They are also gathering and mapping the locations of fossils, including microfossil pollen, of the undersea flora and fauna.

The preliminary results were displayed at the Royal Society Summer Science Exhibition in London under the title, "The Drowned Landscapes of the North Sea,"4 and the formal results are scheduled to appear in the International Journal of Nautical Archaeology.

So far, none have claimed a connection between Doggerland and Atlantis, which some researchers believe was once an Ice Age city, now submerged off the west coast of Spain.1

A giant ice dam that once spanned roughly from Dover to Calais and retained a lake to its northeast catastrophically failed, resulting in the local flood that carved the English Channel.5

This was not a singular kind of event. Recently, meteorologist Michael Oard listed seven local megafloods occurring in Siberia, Canada, the United States, and Alaska.6 Post-Flood Ice Age cities that are offshore today were submerged by the cumulative waters from many local ice-melt "megafloods" similar to the one that carved the English Channel. Doggerland data makes sense in light of the post-Flood Ice Age.

Image credit: University of St. Andrews, Copyright © 2012. Adapted for use in accordance with federal copyright (fair use doctrine) law. Usage by ICR does not imply endorsement of copyright holders.