The effects of the Japan earthquake of March 11, 2011, broadcasted on television made it one of the most terrifying natural events ever displayed in near real time. Several large earthquakes have occurred in recent years with accompanying tsunamis that killed tens of thousands of people, but this most recent tragedy of earthquake, tsunami, releases of nuclear radiation, and thousands of displaced people has forced many to re-evaluate their view of the end times.

Geophysicists have reported that the movement of the tectonic plates under Japan changed the figure axis of the earth and shortened the day slightly. If the Japan earthquake affected this axis and changed the rotation rate of the earth, are earth’s motions becoming more unstable? Could these instabilities lead to more earthquakes and other end-time events described in the Bible?

Although the Japan earthquake was of magnitude 9.0 on the Richter scale, produced major damage, and at the time of this writing is projected to have killed up to 20,000 people, it needs to be placed in perspective with other, larger disasters. Earthquakes, tsunamis, tropical cyclones, and volcanic eruptions have caused even greater damage and killed more people in the past. The 2010 Haiti earthquake killed over 300,000 people, injured another 300,000, and made homeless over one million. The Indonesia earthquake and tsunami of 2004 killed over 200,000 people. The Bangladesh tropical cyclone and storm surge of 1970 is estimated to have killed about 500,000 people. 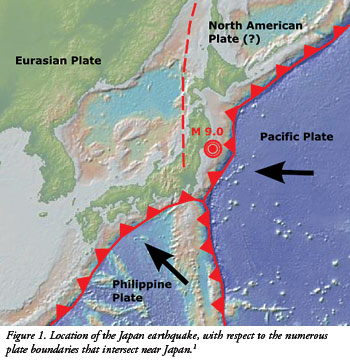 Volcanoes have erupted in many places on earth, killing large numbers of people. For example, Tambora and Krakatoa erupted in Indonesia in 1815 and 1883, respectively. Tambora killed over 70,000 people and Krakatoa 40,000. Vesuvius had a major eruption near Naples, Italy, in A.D. 79, and Thera in the Aegean Sea about 1500 B.C., which probably killed many tens of thousands of people around the Mediterranean by massive flows of lava and/or tsunamis.

Even larger eruptions have occurred, as evidenced by large calderas in Yellowstone National Park in Wyoming, Crater Lake in Oregon, and Mammoth Lakes in California. The public is unaware of many of these natural disasters because they occurred in remote locations many years ago without the real-time news coverage we experience today.

Movement of the Tectonic Plates

The epicenter of the Japan earthquake in March occurred about 19 miles below the surface of the earth and the ocean about 200 miles northeast of Tokyo, as shown in Figure 1. The identification of the plate under Japan is somewhat controversial because it is thought to be a piece of the North American Plate that occurs on the western side of the Pacific Ocean. 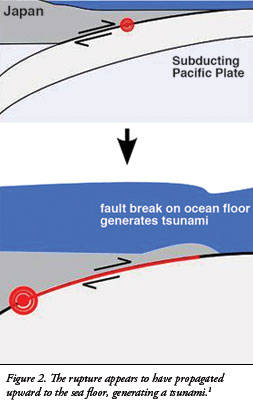 The Pacific Plate is believed to be sliding westward under a sliver of the North American Plate on which Japan rests, as shown in Figure 2. It continues under the North American Plate and subducts under the Eurasian Plate. The Pacific and North American plates were locked until March 11, 2011, by an irregularity between the two plates, causing stress to build up. The two plates became unlocked, causing the Pacific Plate to move westward and the upper North American plate to move some 15 to 30 feet (5 to 10 meters) eastward, as seen in Figure 3. The tsunami was generated by horizontal convergence of the two plates at the ocean floor and, possibly, by the formation of a mound of sediments at their junction. The water above the rupture was forced upward, generating waves that moved outward in the ocean as a tsunami.

Effect on the Earth’s Axes

The figure axis of earth that was reported to have been changed by the Japan earthquake1,3,4 is not the same as the magnetic axis or the spin axis. The magnetic axis is the line between the poles of the earth’s magnetic field that determines north and south on a compass. The spin axis is the line in space about which the earth rotates. It is inclined about 23.5 degrees from the plane of the ecliptic on which the earth orbits the sun. The figure axis is the line through the earth about which the distance from the axis to each element of mass is minimized. In other words, it’s a way of describing the distribution of the earth’s mass. The spin axis and the figure axis are aligned fairly closely together, but the magnetic axis is aligned at an angle considerably different than the other two. The three axes vary a small amount depending on properties of the earth. 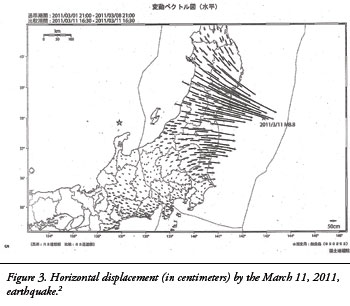 The release of the tension between the Pacific and North American plates due to the Japan earthquake caused a small redistribution of the earth’s mass such that its moment of inertia and figure axis were changed slightly, increasing the rotation rate. According to an article in Science Daily,3 this increase in rotation rate shortened the length of the day by about 1.8 microseconds (a microsecond is one millionth of a second). Using a United States Geological Survey estimate for how the fault responsible for the earthquake slipped, research scientist Richard Gross of NASA’s Jet Propulsion Laboratory in Pasadena, California, applied a complex model to perform the theoretical calculations of how the Japan earthquake—the fifth largest since 1900—affected the earth’s rotation.4

Major natural catastrophes have occurred and continue to occur on the earth. The recent events in Japan, though they were devastating, were not as large as many past catastrophes. Although the Bible speaks of cosmological and geological events occurring in the end times, the recent earthquakes and tsunamis do not match the magnitude demanded by prophecy. Nor does there appear to be an increase in the frequency of large earthquakes and other catastrophes that would lead one to believe that the last events of the end times are occurring. But even if there was an interval of increased frequency, Scripture specifically says, “For yourselves know perfectly that the day of the Lord so cometh as a thief in the night” (1 Thessalonians 5:2). The cosmological and geological events of the end times will be greater than anything we have experienced in our lifetime and will descend upon those still present on the earth suddenly and unexpectedly.

However, another portion of Scripture reminds us to always be ready for the Lord’s return.

But as the days of Noah were, so shall also the coming of the Son of man be. For as in the days that were before the flood they were eating and drinking, marrying and giving in marriage, until the day that Noe entered into the ark. (Matthew 24:37-38)

The Lord’s return will be sudden and activities will appear to be normal. However, when the Lord comes, catastrophes will occur globally and destruction will be similar in magnitude to the days of Noah, but without a global flood. We really have no concept of how sudden and massive the events of the Genesis Flood were. For example, tsunamis during the Flood were not 30 feet high as occurred during the Japan tsunami, but were likely hundreds or even thousands of feet high. Earthquakes were not 9.0 on the Richter scale, but probably 10 or higher. That means earthquakes would have produced ground motions tens of times or more greater than those that occurred in Japan. During the Japan earthquake, one small volcanic eruption occurred in southern Japan. During the Genesis Flood, literally thousands of volcanoes would have erupted, based on some 10,000 extinct volcanoes remaining on the surface of the continents and under the oceans.

For Christians who are looking forward to the Lord’s return, His coming will be a blessing. The Lord will come to take His own to spend eternity with Him before the devastation hits. I always enjoyed walking into the San Diego office of ICR founder Dr. Henry Morris and seeing the plaque on his wall that said simply, “Perhaps today.” Let’s anticipate the return of the Lord by informing as many of our friends and family as possible how to escape the judgment to come.

Maine Lobsters Make International News
The life of a Maine lobster is mostly a matter of crawling around on muddy continental shelf seafloors, not far from a coastline. Benthic scavenging is...
BY: JAMES J. S. JOHNSON, J.D., TH.D.
More Creation Science Update

ACTS & FACTS
Donors Make It Happen
In 1 Samuel 30, there’s an interesting story that’s easy to overlook if you fly by too fast. David and his men are returning from Jezreel...
BY: DARYL ROBBINS
Shop Related Products