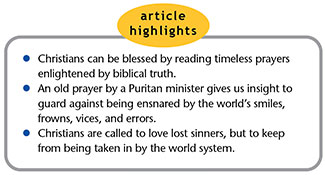 What is wonderful about the Bible is that it is always relevant to any generation in any culture. Christians have also been blessed by reading many of the thoughts and prayers enlightened by biblical truth.

A dear friend gave me a book of Christian prayers with a somewhat odd title, The Valley of Vision. He said, “These prayers are hundreds of years old, but trust me, you are going to be challenged and blessed by them!” He was right. This book of prayers has been a joy. One prayer by a Puritan minister from the 1600s combined wonderful thoughts of the Lord Jesus with four perceptive requests for help. It says, in part:

Thou God of all grace,
Thou hast given me a Saviour, produce in me a faith to live by him,
to make him
all my desire
all my hope
all my glory….
May thy dear Son preserve me from this present evil world,
so that its smiles never allure,
nor its frowns terrify,
nor its vices defile,
nor its errors delude me.1

I was struck by how insightful his request was for deliverance from four specific ways that the world could ensnare him: smiles, frowns, vices, and errors.

This prayer is applicable today for anyone confronting Darwin’s personification of nature as the substitute creator in lieu of the Lord Jesus Christ.

As a new believer in the 1970s, I heard much about “the world” in church. It was usually in the context that there were the ways of the world as contrasted with the ways of the Christian. The apostle Paul admonished Christians, “Do not be conformed to this world, but be transformed by the renewing of your mind, that you may prove what is that good and acceptable and perfect will of God.”2 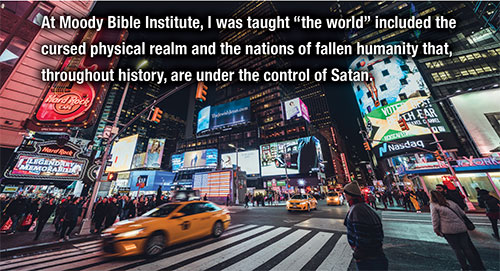 At Moody Bible Institute, I was taught “the world” included the cursed physical realm and the nations of fallen humanity that, throughout history, are under the control of Satan. He manipulates them through an organized system of corrupted governmental, educational, entertainment, and even religious institutions. Taken together, this “world system” opposes the spread of the gospel by 1) blinding people’s minds through lies and confusion, 2) fostering the enslaving pleasures of sin, and 3) intimidating believers through sanctioned harassment and persecution. The Bible describes the world not merely as a concept but a substantive entity that can be manipulated and even weaponized.

The gospel of John says much about the world. We are barely into the first chapter when we read the Lord Jesus “was the true Light which gives light to every man coming into the world. He was in the world, and the world was made through Him, and the world did not know Him.”3 In His prayer in John 17, Jesus identified Christians as His people whom the Father has called “out of the world.” Then our Savior focuses this prayer on the Christian’s relationship to the world:

An instructive picture emerges. On the one hand, the well-known verse John 3:16 says, “For God so loved the world that He gave His only begotten Son.” But on the other hand, this world system (ruled by the “prince of this world,” Satan) opposes the Lord’s work and His people. Christians are called to love lost sinners but to keep the world’s system at arm’s length.

The Romans 12 passage highlights one other important characteristic of the world: People must demonstrate strict conformity and allegiance in both behavior and thought to the norms set by the world. In a colloquial way, the world could be seen as “the crowd,” or if whipped up into frenzy it would be called a “mob.” Even people who are part of the world must be guarded when dealing with the world’s system. It is like a pack of wild animals that will turn on them—with great delight—and eat any of their own who strays in the slightest way from the crowd. The world is particularly intolerant of independent thinking, fearing any emergence of nonconforming or oppositional ideas. Thus, the world is triumphant when someone surrenders autonomous thinking and willingly brings it into conformity with the masses.

We share the same struggles today that our Puritan brother did hundreds of years ago. His request that “its smiles never allure, nor its frowns terrify, nor its vices defile, nor its errors delude me” is really an appeal for help to resist the world’s pressure for conformity.

So That Its Smiles Never Allure

This type of pressure comes under the guise of friendship—in this case friendship with the world. Who doesn’t like friends? Not only do the smiles of the world offer friendship, but they also offer approval and acceptance. Friendship pressure is common and perhaps the most successful way to breed conformity. It opens the door that leads to further willing conformity.

But it can be resisted. When Zerubbabel began reconstruction of Jerusalem, his enemies initially approached him with alluring smiles.

Now when the adversaries of Judah and Benjamin heard that the descendants of the captivity were building the temple of the LORD God of Israel, they came to Zerubbabel and the heads of the fathers’ houses, and said to them, “Let us build with you, for we seek your God as you do.”5

But he didn’t fall for this lie.

Nehemiah’s enemies sought to allure him in the same way. “Sanballat and Geshem sent unto me, saying, ‘Come, let us meet together in some one of the villages in the plain of Ono.’” But Nehemiah was not ignorant of this device and wisely understood the real intent: “But they thought to do me mischief.”6

Solomon warned that “the kisses of an enemy are deceitful.”7 When a Christian goes along with the world, he should know that he is never walking with a true friend but a mischief maker. Soon, his Christian distinctives are blurred, his witness is muddled, and then it grows silent. James’ rhetorical question brings clarity: “Do you not know that friendship with the world is enmity with God? Whoever therefore wants to be a friend of the world makes himself an enemy of God.”8

Nor Its Frowns Terrify 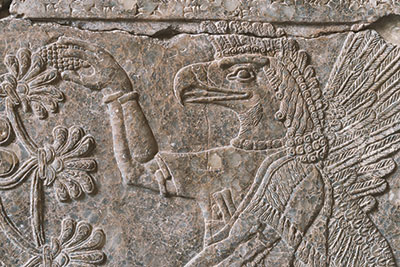 Soon, Nehemiah found himself facing hired prophets foretelling that he would be murdered in his sleep to frighten him into abandoning his work.9 Similarly, King Hezekiah of Judah was sent threatening letters from Sennacherib king of Assyria, who had captured all the fortified cities of Judah.10 Sennacherib intended to terrify Hezekiah, or at least the inhabitants of Jerusalem, into surrendering the city without a fight.

Threats and intimidation directed toward Christians are meant to incite fear primarily through sowing doubt about Christ’s promise “I am with you always, even to the end of the age.”11

Just as in the cases of Nehemiah and Hezekiah, the world’s threats are designed to stimulate thoughts of uncertainty and misgiving, such as: “You are weak, and they are strong. You are just being a fool.” And possibly the most familiar and effective: “You are all alone.” Fear can be paralyzing.

But Christ has not left us alone, and He never will. The reality of His resurrection can replace fear with boldness. The Hebrew Christians were encouraged to consider:

Inasmuch then as the children have partaken of flesh and blood, He Himself [Christ Jesus] likewise shared in the same, that through death He might destroy him who had the power of death, that is, the devil, and release those who through fear of death were all their lifetime subject to bondage.12

Nor Its Vices Defile

We do not need to go into detail about vices. We all know what they are and the ones that most easily beset us. A reminder of the personal cost of defilement is appropriate. “Defile” is defined as debase, pollute, corrupt, to make unclean or impure, to desecrate oneself. The Bible mentions it 112 times. The Lord’s graphic picture of defiled Canaanite practices reveals His thoughts:

“Do not defile yourselves with any of these things; for by all these the nations are defiled, which I am casting out before you. For the land is defiled; therefore I visit the punishment of its iniquity upon it, and the land vomits out its inhabitants.”13

A sober warning for all—especially Christians in public ministry—is found in this rarely discussed sentence in the prophet Nathan’s indictment of King David: “However, because by this deed you have given great occasion to the enemies of the LORD to blaspheme….”14

Nor Its Errors Delude Me

The apostle Paul cautions Christians not to be deluded, “that we should no longer be children, tossed to and fro and carried about with every wind of doctrine, by the trickery of men, in the cunning craftiness of deceitful plotting.”15 This appropriately highlights the deceptive ways of our opposition. Trickery and cunning craftiness sound like carefully planned actions intended to mislead even the most perceptive Christians. 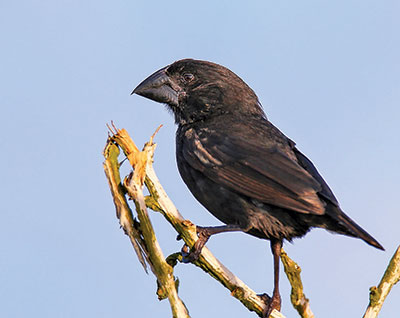 Worldly thinking infiltrates education, entertainment, the entire political spectrum, your friends, the internet, and even Christian publishers. To not allow ourselves to be deluded, we should beware of doubt-fostering questions similar to these: Do you think you’re smarter than the experts? Why can’t you just be reasonable and meet in the middle? Why do you always have to be so hardline? It wouldn’t be working if it weren’t true, right?

Like our Puritan brother, we must pray for supernatural insight. Be biblically informed. We can’t afford to be ignorant of Satan’s cunning devices, and if we are tricked once we must learn from that mistake so we don’t repeat it.

The Lord raised up the Institute for Creation Research to aid Christians to avoid being deluded by Darwin’s misleading worldview that personifies nature as the substitute creator in lieu of the Lord Jesus Christ. Darwin’s worldview promotes other falsehoods, like biological evolution and geological frameworks prompting a belief that rocks have existed for billions of years. ICR’s research, written resources, and Discovery Center are vital to counter this worldly thinking. These resources exist to give Christians the best and freshest biblical and scientific evidences for countering the world's system and to help pastors lead, feed, and defend their flocks.

* Dr. Guliuzza is President and Chief Operating Officer at the Institute for Creation Research. He earned his M.D. from the University of Minnesota, his Master of Public Health from Harvard University, and served in the U.S. Air Force as 28th Bomb Wing Flight Surgeon and Chief of Aerospace Medicine. He is also a registered Professional Engineer and holds a B.A. in theology from Moody Bible Institute.