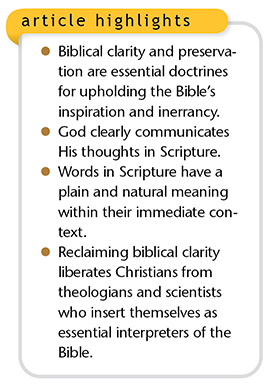 “The Bible is the inspired, inerrant Word of God” has been affirmed repeatedly from pulpits. But did you know this important declaration presupposes two other essential doctrines of the Bible? These are biblical preservation and clarity.

Preservation means that God has supernaturally safeguarded the information He wanted in His Bible all the way from Moses, and perhaps Adam himself, to now. Clarity affirms that anybody can understand the plain message of Bible passages such as “for in six days the LORD made the heavens and the earth, the sea, and all that is in them” (Exodus 20:11). In comparison to the doctrine of inspiration, clarity and preservation seem to get little respect, but they are equally important truths. After all, what good is a God-breathed book to a Christian if it’s either unintelligible or can’t be found?

It’s easy to understand the doctrine of biblical clarity (technically called perspicuity) when we strip away the theological jargon. It means that God clearly communicates what He wants to say to people at any time and in any culture when they can read an accurate translation of the Bible. The average person who doesn’t have an advanced degree in science or theology can attain a clear understanding of what the Bible means. In short, with nothing more than our own reading of the Bible’s words, Christ clearly communicates His thoughts to us—regardless of whether we are a religious cleric or a hotel clerk.

Do you recall that the apostle Peter thought it was important to “stir up” his reader’s memory about very important matters through repetition (2 Peter 1:13; 3:1)? Biblical clarity is so vital to creationists that it’s worth a bit of repetition. It’s also fundamental to one of the Institute for Creation Research’s missions, which is to help pastors lead, feed, and defend their flocks. 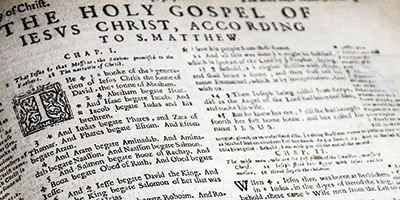 The Geneva Bible was translated in the 16th century by a group of English Protestant scholars who sought refuge in Geneva, Switzerland, from persecution. One of the Reformation’s goals was putting the Bible into the hands of common people so they could read it for themselves.

As I mentioned in a previous article on biblical clarity, few creationists understand why clarity supersedes inerrancy in making the biblical case for a young earth and supernaturally created, non-evolving creatures.1 I recounted a debate I had with a theistic evolutionist and a progressive creationist. Everyone on the panel claimed to endorse biblical inspiration and inerrancy. But the debate centered on whether Christians could reliably arrive at a correct biblical interpretation by giving the words their normal meaning in their normal context, or if outside information supplied by scientists was also essential. Thus, the crux was not strictly over science but over the sharp division about biblical clarity.

Nonbelievers Can Demonstrate the Clarity of Scripture 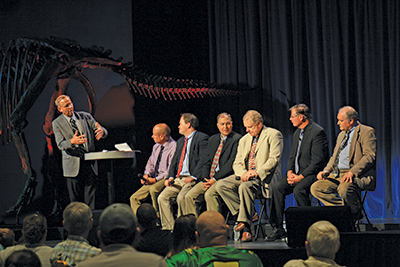 Could someone who doubts God’s existence interpret the Bible correctly? Yes, because the Bible’s words are clear. So, if an agnostic gives the Bible’s words their normal meaning in context, they can come to a correct interpretation. This is demonstrated in the Bible commentary Asimov’s Guide to the Bible, authored by the famous agnostic Isaac Asimov, in the sections where he interprets Genesis 1. He arrives at a normal interpretation that God created the universe in six 24-hour days. But, to succinctly paraphrase what Asimov concludes about that straightforward message, he says in effect, “That’s crazy.”

Asimov demonstrates the truth of both biblical clarity and of 1 Corinthians 2:14, which says, “But the natural man does not receive the things of the Spirit of God, for they are foolishness to him; nor can he know them, because they are spiritually discerned.” This passage doesn’t say that the Bible is unintelligible to unbelievers but that after they understand the words they conclude that what is being said is foolish. They understand what the Bible’s words mean, but those precious words mean nothing to them because they are devoid of spiritual discernment.

Interestingly, a 2019 book review on Asimov’s Guide to the Bible states that people should read the Bible. But the author, Josh Jones, doesn’t want to let the Bible speak directly to readers by giving the words their normal meaning in their normal context. He suggests inserting something like Asimov’s Guide between the Bible and the reader as an interpretive filter. He says, “Everyone should read the Bible, and—I’d argue—should read it with a sharply critical eye and the guidance of reputable critics and historians, though this may be too much to ask for those steeped in literal belief [i.e., those holding to biblical clarity].”2

It’s easy for one agnostic who disregards the plain implications of a biblical passage to persuade other agnostics to do likewise because neither believes in inspiration. But how could someone who holds to biblical inspiration but rejects the implications of a clear passage of the Bible get other believers to also disregard it? By dipping into the same playbook used by secularist Josh Jones. If some Christians don’t like what the Bible clearly teaches, then they seek to insert an interpretive filter between the Bible and themselves.

Christians intuitively sense that biblical authority is being undermined when either a scoffer or a fellow believer asserts that additional information outside of the Bible is crucial to understand it. Let’s consider why this is true and some practical ways to avoid being ensnared by this erroneous line of thought.

If you discuss the Genesis 1 creation account with theistic evolutionists, they will inevitably assert that several words really mean something different from their normal contextual meaning and that biblical interpretations must be informed by scientists. Creationists often respond that this undermines the authority of Scripture. To this, theistic evolutionists offer reassurances of their belief in biblical inerrancy—that sounds like belief in its authority—which seems to nullify the creationists’ argument.

However, when anyone asserts the necessity of scientists to determine the true meaning of the Bible, creationists should respond that the Bible teaches that its words are clear. Remind them how throughout church history the truth of biblical clarity has always been a threat to those who want to control another person’s thoughts by telling them what the Bible means and not letting them learn from it for themselves.

Thus, if Christians allow scientists to tell them how to understand the Bible rather than relying on the Bible’s words themselves (and the Holy Spirit), then scientists now sit as the Christian’s immediate authority instead of the Bible. So, to keep the Bible in its proper place of direct authority, don’t interpret the Bible through the lens of the world’s science or philosophy.3

Creationists and theistic evolutionists diverge greatly over the scientific merits of evolutionary theory, but just as importantly they differ in their approach to Scripture and biblical clarity. ICR has always been at the forefront in championing the clarity of Scripture. Biblical clarity and the normal interpretation of Scripture are two sides of the same coin.

By reclaiming biblical clarity, Christians embrace a truth that releases them from the bondage of theological or scientific elites who proudly insert themselves as an essential interpretive filter between believers and the Bible.