Hummingbirds! | The Institute for Creation Research
Skip to main content

Who doesn’t pause to marvel when a hummingbird flies by? These tiny, colorful birds perform amazing aerobatic feats, and yet some very smart scientists insist that mere natural forces mimicked a real engineer to construct these fascinating flyers. Authors of a Nature paper on hummingbird flight wrote in 2005 that “the selective pressure on hummingbird ancestors was probably for increased efficiency.”1 They imagine that hummingbirds evolved from ancestors that could hover only briefly. But an examination of just a few key hummingbird features leaves no doubt “that the hand of the LORD has done this,”2 not natural selective pressures. 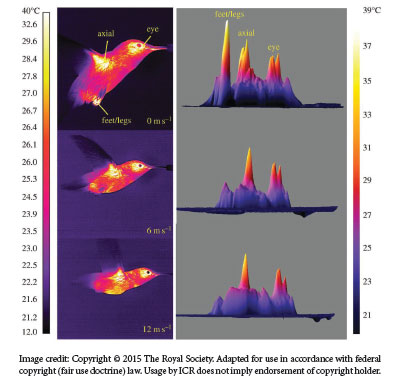 Hummingbird beaks, bones, and feathers differ from those of all other living or extinct bird kinds.3 Their wings don’t fold in the middle. Instead, they have a unique swivel joint where the wing attaches to the body so that the wings rotate in a figure-eight pattern. And they move fast! They have to beat their wings rapidly to hover, levitating with level heads as they extract nectar from flowers for hours per day. Scientists still need to discover the bird’s mental software that coordinates information about the location of a flower’s center with muscle motion that expertly stabilizes the hummingbird’s little head as it drinks.4

Its long, slender beak and skinny tongue dip into and out of the flower to gather nectar using a clever automatic fluid-trapping mechanism. Tiny, curved structures along the tongue’s tip open to hold nectar, then curl up tightly after the bird swallows.5 When the hummingbird finishes with one flower—or with the backyard hummingbird feeder—it moves away by flying backward! It could not do this, nor could it twist, dive, or maneuver through the air the way it does, without having extra-long primary feathers on its wings. These are the largest body feathers and produce most of the needed lift.

Could evolution transform a bird like a treeswift into a hummingbird by adding required parts one at a time? Imagine that nature had somehow selected a bird with a hinge joint, long primary feathers, and head-balancing and body-leveling circuitry, but it still had a short beak with a short tongue to fit—or even a long tongue that didn’t fit! Such a creature might hover in front of a flower but could never reach its food without a suitable beak. Wouldn’t such a partly evolved creature starve to death before selection “forces” could add the right beak?

Even if nature somehow crafted a hummingbird with every flight-required part except one—say, its primary feathers were a centimeter too short, or it had everything in place except its unique hinge joint—the creature could not fly. Therefore, it could not reproduce or evolve.

New hummingbird research has revealed other fascinating features. Birds generate a lot of heat when they fly. Considering their speed, you might expect hummingbirds to burst into flames at any moment. Where does all that body heat go? Infrared cameras revealed hummingbird “radiators” that direct body heat out through the feet, shoulders, and eye areas.6 And some male hummingbirds use air flowing through their tail feathers to produce melodious sounds during courtship.7 Our great Creator expertly integrated all these phenomenal features into His tiny aerobatic experts.