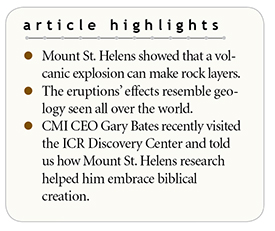 ICR was recently pleased to host Gary Bates, CEO of Creation Ministries International-USA, for a private tour of the under-construction ICR Discovery Center for Science and Earth History.1 While we watched busy workers add greenery to the Mount St. Helens model, Gary told of a time years ago when evidence from ICR’s research of the 1980s eruptions in Washington State led him to switch from evolution to creation.

Within days of becoming a Christian, Gary began struggling to fit evolution with the Bible. His struggle ended when he saw geologist Dr. Steve Austin present ICR research on Mount St. Helens. By the end of that hour, he had learned enough geology to refute fish-to-fishermen evolution. What does a volcanic eruption have to do with belief in evolution? Gary explained his logic.

First, he learned that Mount St. Helens released the energy of 20 million tons of TNT on the morning of May 18, 1980. The blast pulverized rock and ejected tons of steam-infused ash and sediments throughout that day. Over three billion cubic yards of avalanche material slid down.2 Eventually, the muddy wreckage settled. At this point, Gary expected that the debris had settled haphazardly. 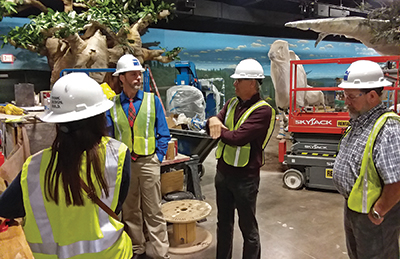 Gary Bates, center, describes his experience the first time he heard an explanation of the Mount St. Helens eruptions in light of the Genesis creation narrative.

But Dr. Austin spoke of a 1982 mudflow that carved deep channels through the thick 1980 deposits, exposing mud made solid in just two years. It shocked Gary to learn that the initial explosion formed distinct layers. Giant cross-beds and fine, flat layers both formed fast. He realized that it doesn’t take a million years to make layers. You just need plenty of fast-moving water.

The Mount St. Helens events only needed hours and months to form the same features found in sedimentary rocks around the world. Common features include:

As soon as Gary learned that rock layers can form fast, he knew Noah’s Flood could have produced enormous rock stacks in one year. We don’t need long ages to solidify sediments. But what about the age-dating schemes that supposedly prove those ages?

Within six years of the eruption, a new lava dome in the crater atop Mount St. Helens had hardened. Standard radioisotope methods pointed to an isotopic age of around 350,000 years for the 10-year-old rock.3 Gary learned then that the highly regarded radioisotope dating methods are broken.4 This made Noah’s recent Flood that much more sensible.

He reasoned that if rock layers formed fast, then the earth could be only thousands of years old—not enough time for fish to evolve into people.

The world’s rocks show evidence of rapid deposits. Erase the time and you erase evolution.

Unimaginably long timespans form the backdrop for all evolutionary speculations. But the world’s rocks show evidence of rapid deposits. Erase the time and you erase evolution. I respect Gary for following the evidence where it led—to biblical creation and thus to the trustworthiness of the God who inspired His Holy Word.