Have Sodom and Gomorrah Been Discovered? | The Institute for Creation Research
Skip to main content

Scripture contains several “stories” that have been ridiculed more than others. Of these, the six-day creation, the global Flood, the parting of the Red Sea, the virgin birth, the resurrection of Christ, and other spectacular works of God receive special criticism. Another mighty act of God that tends to be disbelieved is the destruction of Sodom and Gomorrah.

Scoffers, both Christian and secular, have a field day with this biblical event because it not only involves God’s supernatural workings and cataclysmic acts of nature, it also represents God’s righteous judgment of sin. This is hard for people to think about, especially today when the specific sin being judged is homosexual behavior. Did the destruction of these cities really happen? Is there archaeological and geological evidence to support it? Do other ancient writings mention it? Yes, to all.

The destruction of Sodom and Gomorrah is a certain fact of history. The Genesis account is written in narrative form and alluded to by several other Old Testament writers. Jesus Himself obviously believed it1 and in fact was an eyewitness as the pre-incarnate Lord. Extra-biblical writings (including tablets unearthed at Ebla) mention Sodom and even give specific references to its location along the Jordanian shore of the Dead Sea. 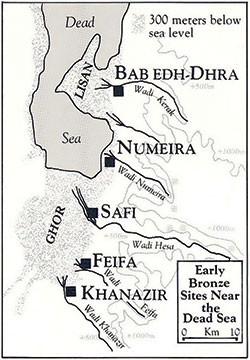 Genesis uses Hebrew action verbs such as “destroy” and “overthrow” to describe the destruction. This does not necessarily infer total annihilation, and thus some remains might have survived. In the early 1970s, Jordanian authorities noticed well-preserved artifacts from ancient times flooding the black market. An investigation led them to an Early Bronze Age graveyard on the southeastern side of the Dead Sea that was in the midst of being plundered. Along five “wadis” (dry riverbeds) flowing westward into the southern Dead Sea, an archaeological survey identified five ruined cities that appear to be the cities of the plain mentioned in Genesis 14:8. The most prominent and northerly one was in ancient times called Bab edh-Dhra, which seems to be the Arabic rendering of Sodom. Next in line was Numeira (Gomorrah), then the modern city of Safi (Zoar or Bela, to which Lot fled and which was not destroyed), then Admah and Zeboiim. The key was finding Zoar. Mentioned in other Scriptures and ancient maps, it led to the discovery of the other nearby ruins.2, 3

These five cities had all been situated along the Dead Sea Rift, a major plate boundary. At God’s command the rift ruptured, spewing great quantities of liquid and gaseous hydrocarbons high into the atmosphere. These ignited, setting the whole region ablaze and covering it with “fire and brimstone.” Abraham saw the conflagration from Mamre, about 20 miles away. The fiery mixture almost certainly didn’t come from a point source, such as a volcano, but destroyed the whole area along the linear fault. The cities were crushed and burned, just as the Bible describes. The city of Sodom actually straddled a fault, causing half of it to fall about 100 meters. No one survived. Today, numerous bodies remain trapped in the rubble.

Biblical archaeologist Dr. Bryant Wood of Associates for Biblical Research located city gates, crushed graves, towers, a temple, the water supply, and thick city walls. Uninhabitable since the destruction, the remains were identified by Dr. Wood as Sodom and Gomorrah. Creation geologist Dr. Steve Austin studied the geological evidence, including the fault zone, the burn layer, the bitumen that erupted, and the city’s calamitous fall to its ruin. Together, they have confirmed the truthfulness of the Genesis account.