You can start the day atop the cold peak of Mt. Haleakala and end it on a warm beach on Maui. The sprawling volcanic mountain rises 10,000 feet above sea level. Nēnē birds, cattle, horses, and people populate its slopes and summits. When did Haleakala form?

Maui formed after Oahu and before the Big Island. Hawaiian schoolchildren memorize the standard age assignments. From west to east, Kauai formed supposedly about five million years ago, Oahu three million, Maui Nui one million, and the Big Island 0.4 million. The Big Island is still forming today.1 But three unique observations in and around this national park make Haleakala look only thousands of years old, not millions.

Spider studies suggest the first clue to a more recently formed Maui. Elusive nocturnal Hawaiian stick spiders creep among the tropical forests on the mountain’s north side. Biologists marvel at how fast these arthropods switch between different body colors. Gold ones live on leaves, white ones on lichen, and dark ones among rocks.

Patterns in their DNA suggest that they pioneered the Hawaiian Islands moving east, starting at Kauai (Figure 2). When a dark stick spider lands on a new island, its offspring suddenly display dark, gold, or white forms. They deploy their color changes faster than “gold and white spiders from the old island have time to reach the new one,” according to Cell Press via ScienceDaily.2 These fast flips suggest that internal programming, not many generations of death, sits at the helm of these spider adaptations.

Authors publishing in the journal Current Biology framed a spider history using the standard times assigned to the islands as an initial assumption.3 Does this sound like circular reasoning?

They offered a defense, writing, “Because of the inevitable circularity of using island age for calibration, we applied a general arthropod molecular clock estimate of 2.3%/myr.”3 Then they referenced a 1994 study as a basis for their “clock.” Problem solved? Not at all, for the author of that 1994 study wrote, “The estimates of divergence times for these [arthropod] taxa [kinds] are based on dated geological events reported by the authors.” Of course, the use of “dated” geological events is just as circular as using “island age” to calibrate timelines, since “island age” equals “dated” geological events.

Circularity is a poor substitute for good science but opens the door to considering a second observation that casts even more doubt on standard dating.

Secular scientists use radioactive isotopes to estimate ages for certain rocks. The process requires workers to assume how much of which isotope was present when the rock cooled. Some classic tests of this assumption used Hawaiian lava rocks.

Just like these Hawaiian lava rocks, isotope age estimates fail to capture known ages for rocks found around the world. Clearly, we need a whole new way to date rocks. What if we built our world history on what the Lord Jesus—who has always been there—says in His Word? The Bible-based alternative of a flood that reshaped the globe may sound silly to those who first hear it, but it fits our next observation: landforms.

Our hike along Haleakala’s Halemau’u Trail revealed flat-lying lava layers. All the islands have these. It looks like the lava landed in sheets, one right after the other. If eons elapsed on Maui between these layers, then where are the ruts and valleys that normal erosion would have etched into the top of each lava layer?

Visitors enjoy Hana Lava Tube northeast of Haleakala. All the islands have lava tubes. The brittle, hollow structures should collapse after only hundreds of thousands of years. The islands and their tubes must have arisen when new seafloors formed near the end of Noah’s Flood only thousands of years ago.8

Steep-walled cliffs erode faster than other landforms. We peered over steep cliffsides near the top of Haleakala. Indeed, the measured erosion rate of five inches per year would have rounded cliffs and flattened whole islands after a million years.9 How could these islands keep their cliffs so long?

The next time you visit Haleakala National Park, remember how circular reasoning in spider “ages” and isotope dating failures both cast doubt on millions-of-years thinking. Flat-lying lava layers, fragile lava tubes, and steep cliffs with measured erosion rates point to a Bible-friendly age of thousands of years for the whole world, including its volcanoes. 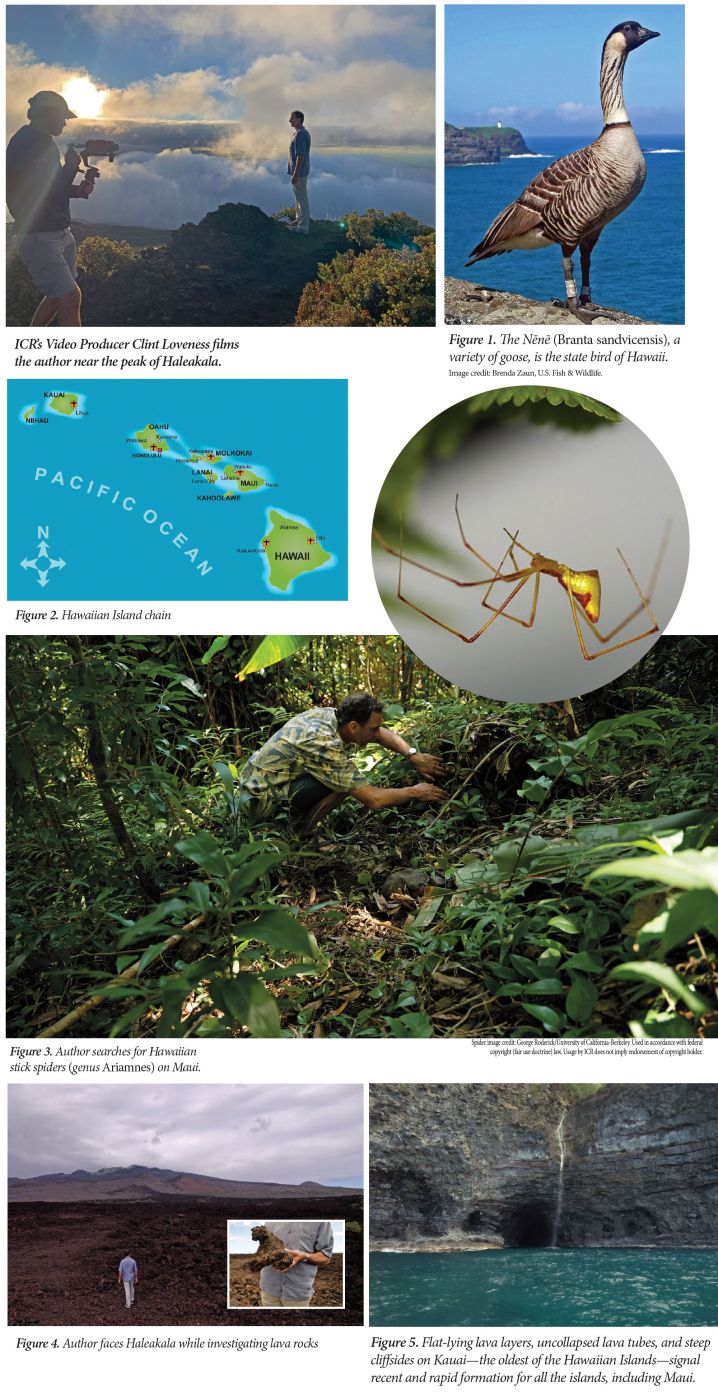