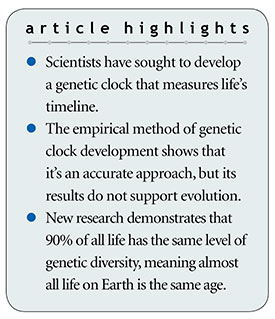 Scientists have been fascinated with the idea of measuring changes in the DNA of humans and other organisms to come up with a “genetic clock” that calculates how long a species has existed. There are basically two ways to do this. One method is hypothetical and speculative, while the other is empirical. Interestingly, the empirical approach is yielding huge amounts of data that fit perfectly with the Genesis account of origins.

The empirical approach is yielding huge amounts of data that fit perfectly with the Genesis account of origins.

The purely speculative approach used by theoretical evolutionists involves comparing different gene sequences between completely unrelated organisms, like humans, apes, horses, and rabbits. The DNA differences are then combined with hypothetical deep evolutionary time to create fictional evolutionary clocks. This technique is riddled with problems that give widely different results depending on the gene sequences and organisms being studied as well as the speculative evolutionary timepoints used to calibrate the clocks. Despite being calibrated by deep time, the time points that emerge as to when the creatures allegedly evolved are frequently in conflict with those derived from paleontology.1,2

The empirical method of developing a genetic clock simply involves measuring the amount of DNA variation in a single type of creature. In humans this is done by measuring the DNA variation in large families from babies to great-grandparents. In lab animals like fruit flies, the process is applied over many generations. When these rates are extrapolated using pragmatic timelines like generation length or population demographics, the results are not only fairly accurate and practical but highly unsupportive of evolution and its deep-time assumptions.

Both secular and creationist researchers have employed the empirical method of developing genetic clocks and have achieved similar outcomes—i.e., dates of creature origins well within the biblical time frame of 6,000 years.3,4 This research has involved the genetic analysis of humans, fruit flies, water fleas, and roundworms.

A massive new genetic study by secular scientists analyzed the DNA of over 100,000 animal species using about five million DNA sequences.5 Researchers at The Rockefeller University and the University of Basel found that the amount of DNA variation among humans was about the same as that observed for each of the many animal species they studied. They also discovered that each kind of creature was genetically distinct—having clear genetic boundaries. Study author David Thaler stated, “If individuals are stars, then species are galaxies….They are compact clusters in the vastness of empty sequence space.”6

When the researchers extrapolated this data into time frames of origins, they discovered that about 90% of all animal life was roughly the same, very recent age—a complete contradiction of evolutionary expectations. Mark Stoeckle, the other study author, remarked, “It is more likely that—at all times in evolution—the animals alive at that point arose relatively recently.”6 According to evolution, animals have progressively arisen over a half-billion years—not all at once in recent time.

In a vain attempt to explain these anomalous results, the study authors speculated that somehow life got nearly wiped out across the board about 100,000 to 200,000 years ago and then had to restart.6 Of course, this is an ad hoc explanation with no corroborative historical evidence.

The Bible’s account is vindicated by science once again.

The only historical record we have of a recent sudden origin of the diversity of life with distinct genetic boundaries (reproducing after their kind) is in the opening chapters of the book of Genesis. The Bible’s account is vindicated by science once again.

Fission Tracks in Crystalline Solids
Highlights • Nuclear fission—atom splitting—is used to date ancient rocks. •...
BY: VERNON R. CUPPS, PH.D.
Radiohalos and Diamonds: Are Diamonds Really for Ever?
by Mark H. Armitage, M.S.  and Andrew A. Snelling, Ph.D. In A. A. Snelling (Ed.) (2008). Proceedings of the Sixth International Conference...
BY:  VARIOUS AUTHORS
Radioisotopes in the Diabase Sill (Upper Precambrian) a.,.
by Andrew A. Snelling, Ph.D., Steven A. Austin, Ph.D., and William A. Hoesch, M.S. Presented at the Fifth International Conference on Creationism,...
BY:  VARIOUS AUTHORS
The Latest
NEWS   ACTS & FACTS   PODCASTS