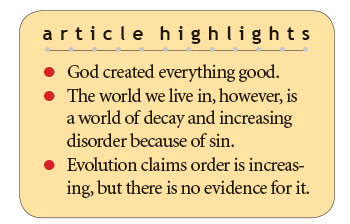 “In the beginning God created the heavens and the earth” (Genesis 1:1), and His creation was “very good” (v. 31). This raises the question of why our current world is in such irreversible decay. Or, as scoffers put it, why did a perfect God create an imperfect world?

The obvious answer is that God did not create an imperfect world. The world became imperfect when humans sinned (Genesis 3). From this passage, it appears a new principle of decay was enacted into creation when sin entered the world. This is known as the principle of entropy or the Second Law of Thermodynamics.

God did not create an imperfect world. The world became imperfect when humans sinned.

What is this law of entropy that set in motion the decay that currently dominates our natural world? The earliest ideas of entropy arose in the early 19th century out of the work of Lazare Carnot and his son Sadi with heat engines. So, the earliest concept of entropy was first associated with the study of thermodynamic systems. Subsequently, the work of Rudolf Clausius, Ludwig Boltzmann, Josiah Gibbs, and James Clerk Maxwell led to a more comprehensive definition of entropy—one that interprets all possible microstates in a system as contributing to the initial and final macrostate of that system under any type of transformation.1,2

This modern view of entropy embraces the ideas of reversibility, disorder, and randomness of a given system. For any reversible process, the change in entropy (ΔS) is by definition zero since there is no change in the heat energy (ΔQ) of the system during the process. (Change is denoted by the symbol Δ.) This is expressed mathematically as: 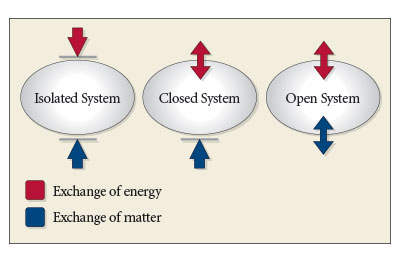 Unfortunately, strictly reversible processes in an isolated system (Figure 1) are not observed in nature due to dissipative forces such as friction. Reversible processes only occur in closed and open systems when the correct amounts of specific forms of energy and/or matter are supplied from outside the system. For example, consider a closed system containing molecules A, B, C, and D in a neutral medium that interact with each other until they balance and reach equilibrium. In other words, the same number of A and B transform into C and D as C and D transform back into A and B.

Now, suppose that when we add heat to the system we drive the system toward the formation of more C and D until equilibrium is again reached. The system cannot now return to its initial condition unless heat is removed to restore the system to its initial state. A positive change in the heat energy of the system has occurred, and thus the entropy (S) has increased.

This is a very simplified example of an irreversible process. ΔS is only equal to zero for fully reversible processes. Secular scientists will argue that entropy can decrease (ΔS < 0) toward greater order in open systems through the addition of matter or energy. However, nature abounds in examples of irreversible processes such as tornados, hurricanes, lightning strikes, floods, volcanic eruptions, earthquakes, and aging, where matter or energy is added in abundance. A broken egg does not spontaneously reassemble itself. It is indeed blind faith that believes the earth has somehow experienced a decrease of entropy over billions of years through a mysterious process called evolution when the evidence demonstrates the opposite.

We who are in Christ wait expectantly for the restoration of all things.

Clearly, we do not live in a perfect world that continually regenerates itself.3 Our fall in the Garden of Eden changed God’s perfect design into something He did not create but allowed to happen as a result of Adam and Eve’s free choice. We who are in Christ wait expectantly for the restoration of all things. As Romans 8:20-21 says, “For the creation was subjected to futility, not willingly, but because of Him who subjected it in hope; because the creation itself also will be delivered from the bondage of corruption into the glorious liberty of the children of God.”