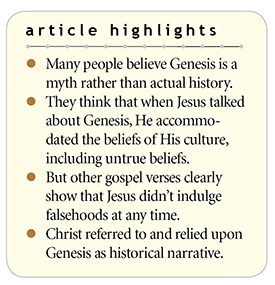 Years ago, while I was teaching a college class, a non-Christian student chided me for treating the book of Genesis as true history. With fake flattery, the student went on to say, “I’m surprised, as knowledgeable as you are, that you treat the Genesis myth as if it was history that actually happened.”

The implication was that all truly “knowledgeable” professors understand that Genesis is just backdated Jewish literature, some kind of poetry forged from ancient myths adopted from Israel’s pagan neighbors. The challenging student also balked at the books of Moses being written by the historical Moses. How would you answer this layered criticism of the Bible’s integrity?

Referring to John 5:44-47, I admonished the student that no one was more knowledgeable than the Lord Jesus Christ, and He treated Genesis as reporting genuine history and recognized Moses as Genesis’ human co-author.1

The skeptical student countered, “Jesus was only accommodating the common beliefs of His culture to avoid offending His audience in a way that would distract from His main message.” The student further alleged that Christ mixed ancient mythology (such as false ideas about creation and the Flood) with His teachings about morality to avoid sidetracking controversies. This is like saying that endorsing minor falsehoods is somehow okay if you do so to prevent listener distraction while you teach “greater good” virtues like honesty and morality.

Slander against Christ’s teachings and other teachings in Scripture is nothing new. Pseudo-scholar Jean Levie illustrates:

Scientific ideas current in those [biblical] days, but which have now been abandoned, may enter into the formulation of teaching [i.e., main message] which alone the inspired writer wishes to assert. It is, moreover, of little consequence whether he did or did not believe in the ideas current in his time, for they are not what he is claiming to assert.2

Jean Levie isn’t alone in his denial of Scripture’s inerrancy. More recently, Peter Enns has added sophistic suggestions that Genesis incorporates ancient creation myths by sanitizing pre-scientific pagan myths and turning them into stories with the Jewish God portrayed as Creator.3 This history-denying accommodationism mischaracterizes Christ, as if He accommodated the erroneous thinking of His “pre-scientific” audiences with an end-justifies-the-means rationale.

Disagreeing with the student challenger’s bluff, I replied, “Christ refused to accommodate false teachings of His generation, regardless of how much He offended His audiences, as He clashed against their popular fallacies.”

To teach, and subsequently to force conflict, Christ healed on the Sabbath.4 Likewise, He prioritized time with children, clashing with Pharisaic teaching that conversations with little children, like talking to ignorant commoners, were a waste of time.5 Christ went out of His way to speak to a Samaritan woman, despite cultural rancor between Jews and Samaritans.6 Knocking over temple money-changer tables, to shame such religious scam-thievery, was not very accommodating.7 The list goes on. Genesis is not myth. Jesus taught it as true history—and He never accommodated falsehood.