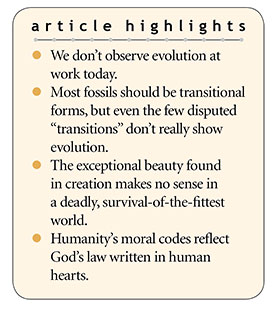 Almost everyone knows someone who believes in evolution. This matters because evolution contradicts Genesis, and the gospel rests upon Genesis. For example, Genesis teaches that God made Adam and Eve, but evolution teaches that nature somehow made us from ape-like creatures. The Bible teaches that Jesus is the last Adam—the first Adam brought death, but the last Adam brings life for those who trust Him.1

This matters because evolution contradicts Genesis, and the gospel rests upon Genesis.

How can Christians converse with those who hold evolution’s radically different ideas? The following challenges might help remove evolution-based objections to the gospel.2

Why don’t we observe creatures evolving into different creatures? Instead, each kind stays true to form. Every supposed example of evolution, like finch beaks changing shape or bacteria eating nylon, merely represents a trait shift. And often those shifts reverse. A beak might get thicker, but later generations can grow thin beaks again. Basic body plans stay stable. If creation is correct, then we would expect stable kinds with trait shifts that help creatures adjust to an ever-changing earth.

Why don’t most fossils show transitions between kinds? Fossils instead fit within specific kinds. Some evolutionists consider Archaeopteryx a transition between reptiles and birds, but others call it an extinct bird—it had flight feathers and a bird body.3 Transitions between reptile and bird should show a gradual shift of the center of gravity away from the hips (theropods) toward the forward-positioned knees of birds. Evolution is supposed to happen very slowly, so most of these fossils should show a body balance somewhere between the two forms. But instead of something in between, we find either a theropod or a bird body balance. The same absence of transitions goes for clam and crab, ape and human, etc.

Why do humans perceive beauty and ugliness? Evolution is supposed to proceed purely by the death of individuals that cannot compete. What role does beauty play in competition? Some birds have bright feathers and others drab ones, but both types survive just fine. For that matter, in what way does our ability to recognize beauty help us survive? It doesn’t. Animals from crayfish to cormorants thrive without a sense of beauty. But people seem obsessed with beauty. We buy lotions, luxury cars, and works of art that don’t help with survival. Where did this sense come from if not from God, who “has made everything beautiful in its time”?4

How does evolution’s struggle for survival explain our sense of right and wrong? Its defenders suggest that ancient, evolving humans invented morals that somehow helped them survive. We supposedly inherited those morals. However, humans do not inherit the mental inventions of their forebears. Also, if unconnected people groups invented right and wrong, then why did they choose essentially the same rules? Husbands in every culture despise other men who harm their wives. Nobody feels happy when punished for helping others. Instead of evolution, these reactions “show the work of the law written on their hearts.”5

We don’t see big-picture evolution in operation today. Both living and extinct animals and plants should show distinct created kinds—and they do.6 God’s universe should show both beauty we can appreciate from a once “very good” creation7 and ugliness from the sin curse8—and it does. Human hearts harbor a knowledge of right and wrong since they were made in God’s image.9 The Bible, not evolution, explains these four observations.