In certain regions geologists find what appear to be fossilized coral reefs either buried in deep underground strata or exposed on the earth’s surface. If these reefs really took millions of years to form, they pose a problem for biblical history. 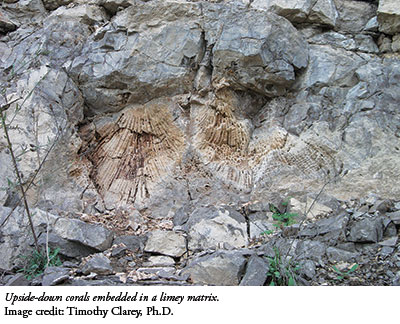 Many modern corals grow quite slowly. Based on these sluggish growth rates, scientists argue that: 1) fossil reefs also developed slowly, 2) the strata they are found in must have been deposited over long ages, and therefore 3) the reefs are far older than the biblical timeline indicates. Creationists, on the other hand, hold that the great Flood of Noah’s day suddenly laid down most of the strata containing these fossil reefs. How could these now-dead reefs grow to maturity in the short time from creation to the Flood? And if the Flood happened only thousands of years ago, has there been enough time since then to account for today’s massive coral reefs?

We must address three foundational issues before drawing conclusions. First, what is the average growth rate of today’s reefs? Second, are “fossilized reefs” really coral reefs? Third, could the “fossil reefs” have grown in different environmental conditions before the Flood, and would those conditions have affected their growth rates?

All reefs must grow at shallow depths where sunlight is abundant and currents bring a steady supply of nutrients. Sometimes situated on a submerged outcrop or object that provides an anchor for their growth, reefs primarily consist of the calcium carbonate remains of corals, sponges, shells, and algae debris.1 Reef-building organisms grow on these remains, secreting bonding material to connect hard structures. Unless reefs are destroyed by storms or disease, they will grow until they near the ocean’s surface.2,3,4

Modern living reefs have been studied, but measuring their growth rates is an inexact science due to fluctuating factors like disease and nutrient availability. In favorable pre-Flood conditions, reefs now buried in the strata could have grown to the sizes we see in the fossils.4 Today, the largest, oldest reefs seem to indicate an age within range of a few thousand years, suggesting that they started at the Flood’s end and are still growing.

Fossil reefs differ greatly from modern reefs. They are typically much smaller, less organized, are often buried in limestone strata, and lack fossil organisms that would have secreted stabilizing glues. What could have bound the coral together?

Scientists interpret ancient reefs subjectively because of these differences. Often, uniformitarian geologists “see” features of a modern growing reef that may not actually exist in the fossil reefs. Cross-sections drawn with an exaggerated vertical scale sometimes show what appears like a buried reef, but is it? These slices often largely consist of chips of broken reef-like material loosely embedded in a limey matrix containing material likely carried in by waves or currents—not produced by reef-building organisms per se. This important detail suggests these “reefs” did not grow but rather were melded together by compression and cementation during a sedimentary deposition.

A biblical understanding brings clarity. Reefs could have grown to maturity in the calm, nutrient-rich pre-Flood waters. During its initial violence, the Flood would have broken the reefs apart and mixed those coral bits with carbonate silt and sand that later solidified. It’s likely that the huge volume of splintered fossil reef material could have accumulated as the strata were laid down during the Flood, roughly resembling actual reefs.

A creation-based explanation answers both our initial questions: There was plenty of time before the Flood for the “fossil reefs” to have grown. Then, the Flood deposited piles of broken bits into “reef” look-alikes. Finally, growth rates observed today show there’s been enough time since the Flood to explain our great modern reefs.