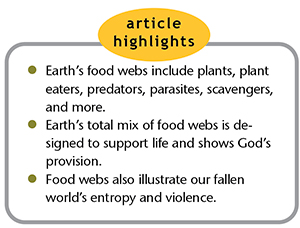 Real-world ecology supports the Bible’s trustworthiness. Accordingly, how creatures get and use food matches how Scripture describes our world.1-3

The notion of a food chain (or food pyramid) is a simplified concept for understanding food energy transfers. Photosynthetic plants are autotrophs—they produce their own food energy from sunlight and inorganic resources like carbon dioxide and water. Plants also become food for heterotrophs (life forms that consume other life forms as food).4

Food chains start with plant material (seeds, fruits, leaves, nuts, grains, grasses, root vegetables) eaten by herbivores like marmots, moose, moths, manatees, or monarchs. Herbivores are eaten as prey by carnivores or omnivores like walruses, wolves, weasels, wrasses, or wolverines. Some predators prey on other predators, so food chains may include secondary, tertiary, and quaternary consumers—with apex predators at the top of the food chain.5 However, apex predators themselves become food for parasites like blood-sucking ticks or mosquitoes. Apex predators eventually die; their corpses are eaten by scavengers like vultures. Thereafter, carrion leftovers are further consumed by detritivores like earthworms and decomposers like fungi.4

In sum, food energy is recycled as food chains branch out into what are really food webs—and those webs are further expanded by nitrogen cycle branching (including nitrogen-fixing bacteria) that extends beyond webs of carbohydrate trophic transfers, food chain processes that metabolically harness carbohydrate food energy.6

Yet, at each trophic level (each “link” of a food chain) as food energy transfers from producer to consumer and then onto the next consumer, etc., the quantity of biochemically usable energy is wasted, lost, or depleted, with heat emitted as wasted energy.2,3,5,6 This waste exhibits the Second Law of Thermodynamics, i.e., entropy, a universal rule.3

In summary, food energy transfers—everywhere and every day—corroborate what the Bible teaches about God’s careful and caring providence: God fits creatures to fill our fallen world.