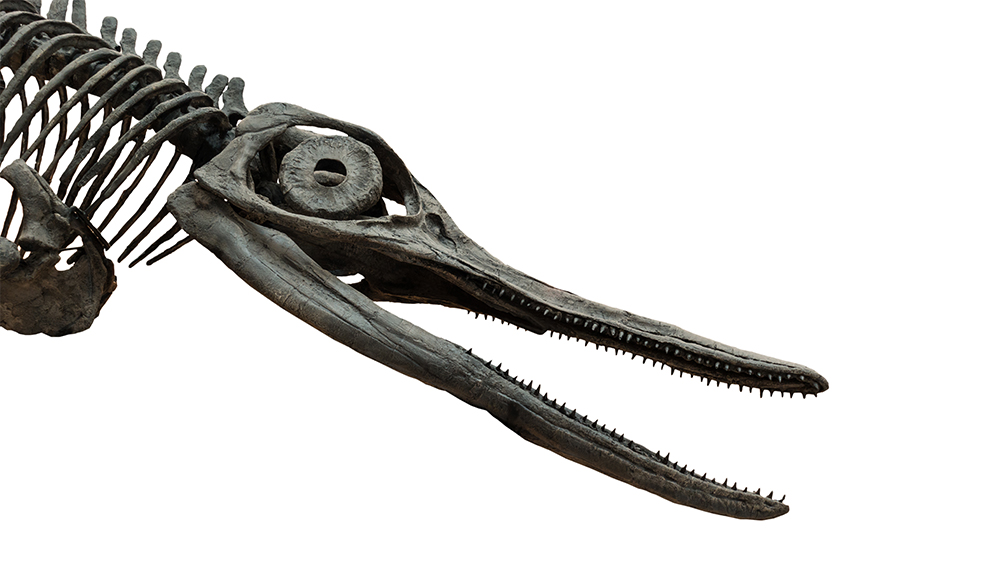 The discovery of dozens of ichthyosaur fossils in Nevada was announced in the journal Current Biology.1 Seven 50-foot long ichthyosaurs of the species Shonisaurus were found in a single layer, and up to 30 more were spread vertically across deposits totaling over 650 feet thick.1 Oddly, almost all of the fossils were large adults, mixed with some neonatal specimens. There were no juveniles or subadults present, leading to a rather preposterous explanation by evolutionary scientists.1

The research paper was co-authored by Neil Kelley of Vanderbilt University and former Smithsonian National Museum of Natural History postdoctoral fellow, Nicholas Pyenson of Oxford University, and several other scientists from around the globe. The team alleges that so many ichthyosaurs were found at this one site because it was their breeding location. And they contend the ichthyosaurs returned to the same exact site for hundreds of thousands or even millions of years.2

We present evidence that these ichthyosaurs died here in large numbers because they were migrating to this area to give birth for many generations across hundreds of thousands of years. There are so many large, adult skeletons from this one species at this site and almost nothing else. There are virtually no remains of things like fish or other marine reptiles for these ichthyosaurs to feed on, and there are also no juvenile Shonisaurus skeletons.2

Furthermore, they tested the rock matrix surrounding the fossils for signs of an environmental disaster associated with the fossil assemblage. They looked for rapid shifts in various geochemical signatures, like mercury, or changes in carbon content, finding no signs of either. This ruled out a cause of death from sudden surges in volcanic activity (usually associated with high mercury levels) or increases in organic matter, indicating lower oxygen levels. The evolutionary scientists concluded these ichthyosaurs kept coming to the area to breed, died, and their bones sank to the bottom of the sea.

But how plausible is this story? Do animals simply die and their bones settle to the bottom of the ocean and become fossils? No! Fossils only form by rapid and deep burial to preserve the bones from scavengers and bacterial decomposition. These dead ichthyosaurs could never have fossilized unless there was a catastrophic burial. And this had to have happened numerous times to explain their repetition in multiple layers totaling hundreds of feet deep.

And would animals return to the same breeding location for hundreds of thousands of years? Wouldn’t there be some type of environmental change or a shift in the subsea landscape in that amount of time? Or is this just another case of evolutionists saying whatever they want, without thinking things through, as long as it follows the accepted evolutionary tale?

Unfortunately, these scientists missed the most obvious answer because of their inflexible evolutionary mindset. They never considered the one historic, global catastrophe described in the book of Genesis. Massive tsunami-like waves during the Flood year could have effortlessly swept up many ichthyosaurs and buried them together in a large pile of sediment. And consecutive waves could have just as easily buried other fossils in successive layers, explaining their extent in sediments in the same general location and pancaked over 650 feet deep.

Many land animals are found buried in marine sediments around the globe and found mixed with marine fossils, too.3 They were swept away by the tsunami-like waves of the Flood and buried fast.4 Some dinosaurs were even washed over 70 miles out to sea!5 This is exactly what we expect from a global Flood. Waves transported ocean-dwelling animals onto the land, and land animals were carried out to sea as waves ebbed and flowed.

The global Flood described in Genesis is the best explanation for these fossil ichthyosaurs. Other suggestions are both implausible and inadequate. Only God’s Word provides the correct answer.