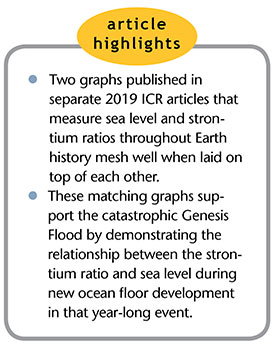 The October 2019 issue of Acts & Facts ran an article on the variation of the 87Sr/86Sr ratio in marine rocks.1 One of our readers noticed a similarity between the 87Sr/86Sr graph in that article and the megasequence/geological column graph of relative sea levels that first appeared in the February 2019 issue.2,3 When placed together on the same secular timescale, the Figure 1 dual graph is the result.

Using the secular timescale on the left side, sea level steadily increased from the Precambrian era (~540 million years ago) until the end of the Cretaceous system (~66 million years ago). This was based on the progressive continental sediment coverage we observed.3 Global sea level shows a precipitous decrease from the Cretaceous system to the late Neogene system (~2.5 million years ago). The accompanying rise in the 87Sr/86Sr ratio is typically interpreted as reflecting the uplift of the Himalayas during the Paleogene system.4

Veizer and Mackenzie4 conclude this ratio is primarily controlled by two sources: the “mantle” (formation of ocean crust) and the “river” flux.5 When combined, these two sources can be placed in a balance equation with approximately 75% coming from the river sources and 25% coming from the mantle sources, to give the value of 0.7092. If one assumes Figure 1 represents 540 million years, then one is forced to conclude the balance between mantle and river flux contributions to the ratio was in continual change for those 540 million years, with the mantle contribution dominating the river contribution. However, over millions of years, one would expect a more uniform change in the sea level, and especially in the strontium ratio. 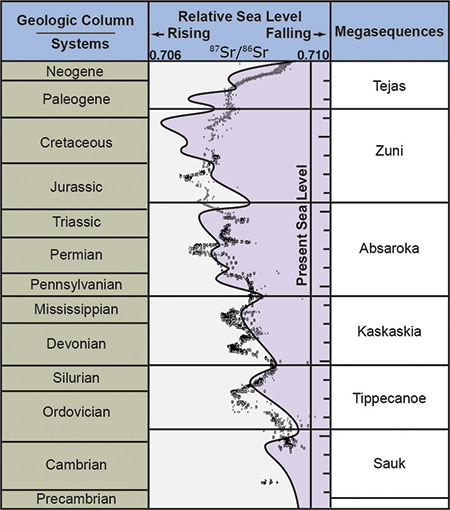 The strontium isotope ratio for seawater better supports the biblical catastrophic megasequence interpretation of Earth history rather than the conventional hundreds of millions of years view.