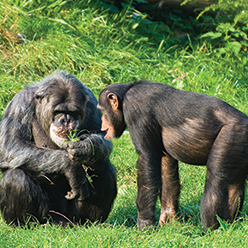 We perceive faces quite differently from how we see other objects. We process the individual features of most items to recognize what they are and what they mean, but we recognize a face all at once. That way we can quickly gather subtle communication clues from facial expressions during conversations and other interactions.

Researchers demonstrated the “face inversion effect” in the 1960s. This describes how people recognize upright faces much better than upside-down faces. In the recent study, the two researchers compared how chimpanzees viewed upright and upside-down faces—as well as each other’s behinds.

They found that the inversion effect applies to the way chimps see their peer’s posteriors. Chimps seem to recognize one another from the appearance of their bottoms better than from the appearance of their faces. Chimpanzee and other primate bottoms reveal unique information. For example, males look different from females, and females display when their bodies are primed for pregnancy. Chimpanzee rear-end recognition goes right along with their rear-end displays.

No objections so far. But the interpretive twists these two scientists applied then turned bizarre. Publishing in PLOS ONE, they argued:

The findings of our study suggest that over human evolution the face took over important properties shared with the primate behind and largely replaced its socio-sexual signaling function, making our species attuned to faces.1

Sure, chimps recognize one another by their behinds, and humans recognize other humans by their faces. But neither observation—nor any other evidence, for that matter—so much as hints that “identity recognition ‘moved up’ from the bottom to the face in our uprightly walking species.”1 In an attempt to justify this rear-end reversal, the authors even suggested that human faces look like chimpanzee bottoms. Both have symmetry and lack hair in places, but the same already holds true for the chimp faces.

The story snags on other issues, too. What if male chimps somehow transitioned from bottom recognition to facial recognition before females lost their bottom displays? Then the males would no longer recognize the right time to reproduce. End of species. The researchers’ assertion that “recognition ‘moved up’” would require chance-based evolution to perfectly synchronize the required transition timing and to divvy up vital gender-specific traits.

We talk face to face much the same as our forefather Adam talked with his Creator.

The study authors wrote, “The correct interpretation of the conveyed information by faces and behinds, including identity, fitness and fertility, is crucial for reproductive success.”1 Doesn’t this statement inadvertently argue against their own story? Without reproductive success, the whole species would die off. And evolutionary alterations to the “crucial” total package of brains and behinds would totally disrupt chimpanzees’ “reproductive success,” thus extinguishing further evolution.

While evolutionary speculation wrongly turns bottoms downside up, chimpanzees continue to thrive—living their divinely designed wild lives like they have from the beginning. Meanwhile, folks like you and me talk (thankfully) face to face much the same as our forefather Adam talked with his Creator in the Garden.