An Extraterrestrial Cause for the Flood? | The Institute for Creation Research
Skip to main content

The Bible mentions the primary physical causes for the great Flood of Noah’s day in Genesis 7:11. First to break loose were “all the fountains of the great deep.” These no doubt brought to the surface enormous volumes of water and magma that had been sequestered beneath earth’s surface. Next, we are told that the “windows of heaven were opened,” pummeling the earth with excessive rainfall. Both “fountains” and “windows” remained open for 150 days (Genesis 8:2-3), and then God closed them. We observe the results of these geologic processes in the vast amounts of sedimentary and volcanic rock draped over the continents. 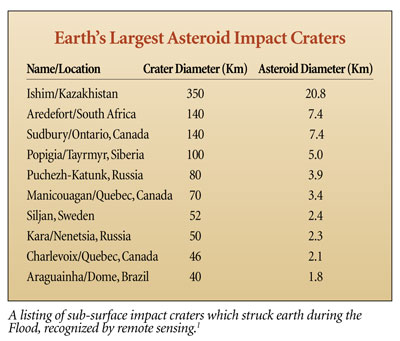 Another geologic process may have been involved, although it is not mentioned in Scripture. Large surface features on earth seem to speak of horrific past events that no longer occur. Meteorite impact craters suggest earlier episodes of bombardment not witnessed by man, but recorded in rock.

The best known crater is the Barringer Meteorite Crater in Arizona. Its sharp edges have not been significantly eroded, indicating that the meteor probably struck ground during post-Flood times. Other craters are too big to see at ground level and can only be detected from a high altitude or on a map. The biggest ones are discerned through sub-surface mapping and the discovery of meteorite fragments in drilling. The underground craters are encased in Flood sediments, leading to the conclusion that meteorites impacted earth during the Flood.

Consider the fact that the nearby moon is literally pockmarked with meteorite craters, as are the nearby rocky planets Mercury, Venus, and Mars. The outer planets, consisting almost entirely of gas, would not preserve such a record of bombardment. However, their moons exhibit abundant cratering. Creation scientists have long speculated that during the Flood the solar system may have passed through a “dirty” place in space or an asteroid swarm.

It may be that the creation week spawned such impacts, but at least the impact craters contained within Flood sediments indicate that meteorites must have hit during the Flood itself, adding to the horrors of the Flood. The impacts themselves would have wrought unthinkable damage, with super-sized earthquakes rattling the crust and towering tsunamis hurtling across the continents. Perhaps bombardment was the God-caused and God-controlled trigger that initiated the Flood, breaking open the “fountains.”

Locked as we are in the present, we can hardly comprehend such a cataclysm and, certainly, cannot reconstruct it—we can only stand in awe of His great power as we study its results.