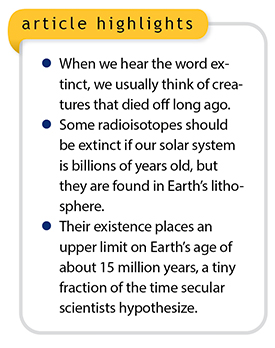 What do you think of when you hear the word extinct? Dinosaurs, perhaps? Maybe saber-toothed cats, mammoths, or short-faced bears? We might also include the more recent Bali tiger, passenger pigeon, and West African black rhinoceros.

There are a group of radioisotopes that are typically termed “extinct” (Table 1). They are defined as radionuclides that formed by stellar nucleosynthesis before the formation of the solar system about 4.6 billion years ago.1 These radionuclides were somehow injected into the molecular cloud from which our solar system supposedly originated. They were thought to have decayed to an unmeasurable presence in solar system objects. It has long been believed that their daughter isotopes can be used to gain information about the early stages of the solar system’s formation. Specifically, the short decay time for 26Al (aluminum) has been used to measure the time between its supposed injection into the molecular cloud and the cloud’s subsequent collapse. 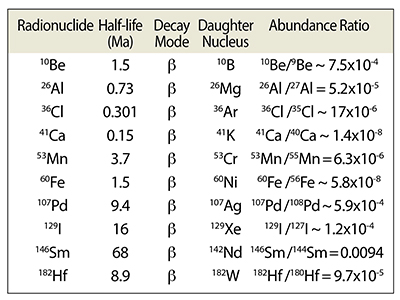 Table 1. Radionuclides thought to be absent from Earth and solar system objects due to their relatively short half-lives (Ma = millions of years)

There are at least four significant problems with this hypothetical scenario. First, it assumes the classical deep time model for the solar system’s origin. Second, it has been shown that the formation of elements with atomic numbers above iron in the periodic table in a supernova is unlikely.2 Third, it doesn’t present a viable mechanism for how the extinct radionuclides were transported from a nearby supernova to the supposed molecular cloud that generated our solar system. Fourth, the so-called extinct radionuclides still display measurable abundance ratios for Earth rocks (Table 1).

From Table 1, it’s clear that the so-called extinct radionuclides exist in Earth’s lithosphere at measurable levels. This means that either they must be continually produced in the near surface rocks, as is hypothesized for 26Al in meteorites, or Earth is much younger than secular science demands. The existence of measurable amounts of 60Fe, 53Mn, 26Al, 36Cl, or 41Ca in Cambrian and Precambrian rock layers makes the argument of continuous production problematic for secular science and supports a recent creation by imposing an upper limit of ~1.5 x 107 years on the age of the earth.7

* Dr. Cupps was Research Associate at the Institute for Creation Research and earned his Ph.D. in nuclear physics at Indiana University-Bloomington.