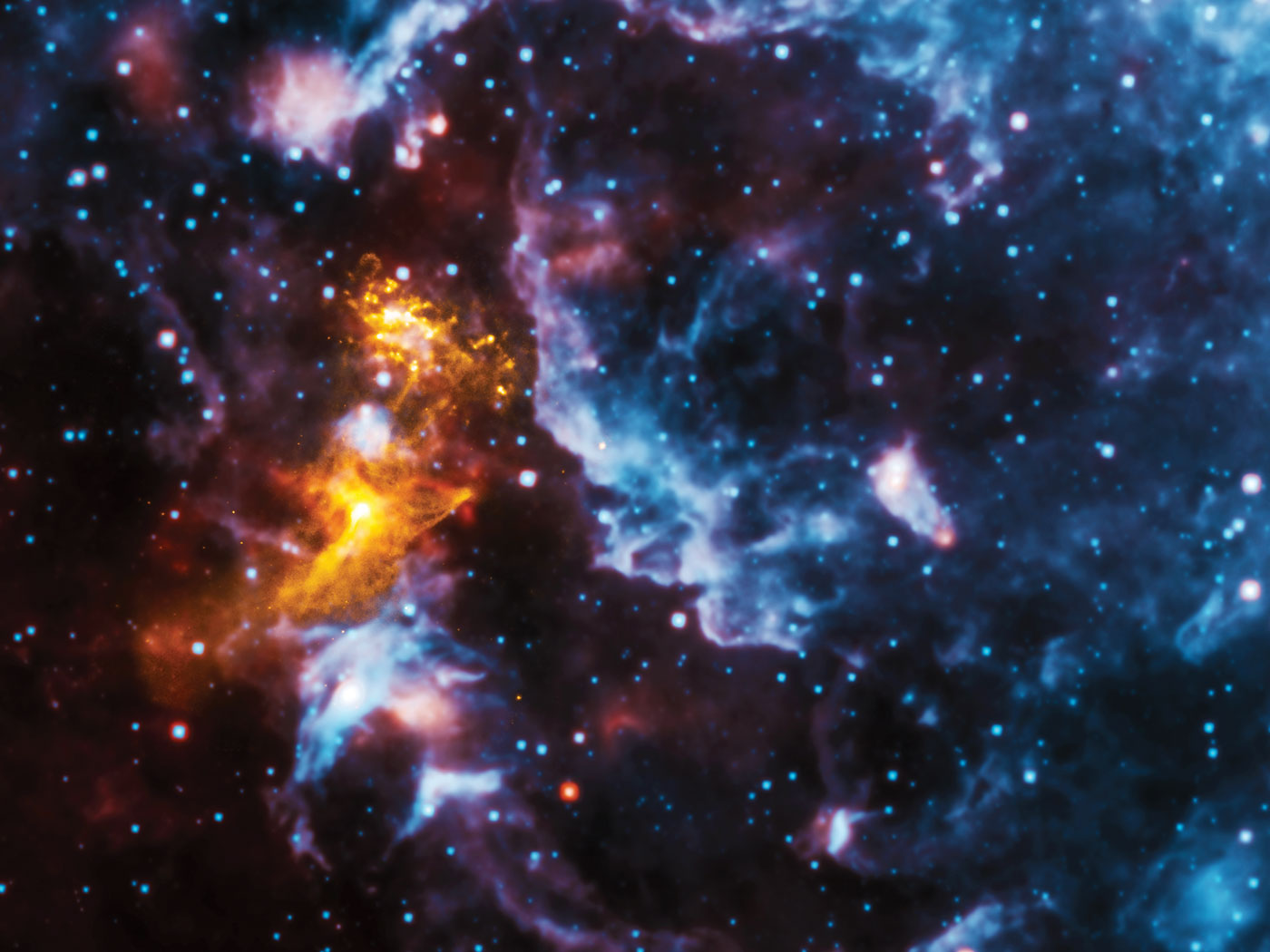 Radiation from pulsar PSR B1509-58, a rapidly spinning neutron star, makes nearby gases glow gold (image from the Chandra X-ray observatory) and illuminates the rest of the nebula in blue and red (image from WISE: Wide-field Infrared Survey Explorer).
Image credit: X-ray: NASA/cxc/SAO; Infrared: NASA/JPL-Caltech. Adapted for use in accordance with federal copyright (fair use doctrine) law. Usage by ICR does not imply endorsement of copyright holder.

Why should we be concerned about where heavy elements—those with a proton number greater than 26—came from? The answer points to two opposing paradigms in the story of origins. The first paradigm is based on random chance events in which nature somehow creates and sustains itself, and the second is based on an ex nihilo (out of nothing) creation that is consistent with the biblical narrative.

In the September 2017 issue of Acts & Facts, we looked at the question of the origin of the elements in our solar system and universe.1 We learned that elements heavier than 56Fe cannot be produced in stars like our sun because nuclear fusion reactions for elements above 56Fe become endothermic—i.e., the surrounding medium must supply energy to the reaction for it to occur. 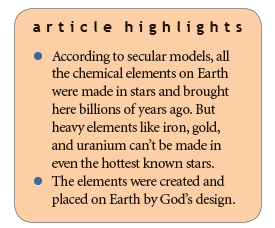 In order for two 56Fe nuclei to fuse, one of the nuclei must have an energy of at least 91 MeV (megaelectron volts) in order to overcome the coulomb barrier2 between them. For the nuclear reaction to occur at all, a mass/energy deficit3 of approximately 44 MeV must be supplied to the reaction (56Fe + 56Fe → 112Te) by the containing medium.4 Now, 91 MeV corresponds to a star temperature of approximately 1.06 × 1012 °K (kelvin), and 44 MeV corresponds to a star temperature of approximately 5.1 × 1011 °K. The hottest stars measured to date are the blue hypergiants such as Eta Carinae with temperatures in the neighborhood of 4 × 104 °K, approximately seven orders of magnitude less than the energy required for such fusion reactions to occur.

The hottest known place in the universe occurs in the searing gas surrounding a swarm of galaxies in the constellation Virgo.5 This gas reaches an amazing 3 × 108 °K, still three orders of magnitude too cold for nuclear fusion above 56Fe. Clearly, it is not possible for the heavy elements to form in known stable stars and nebula. So, how do mainstream scientists explain the existence of heavy elements? 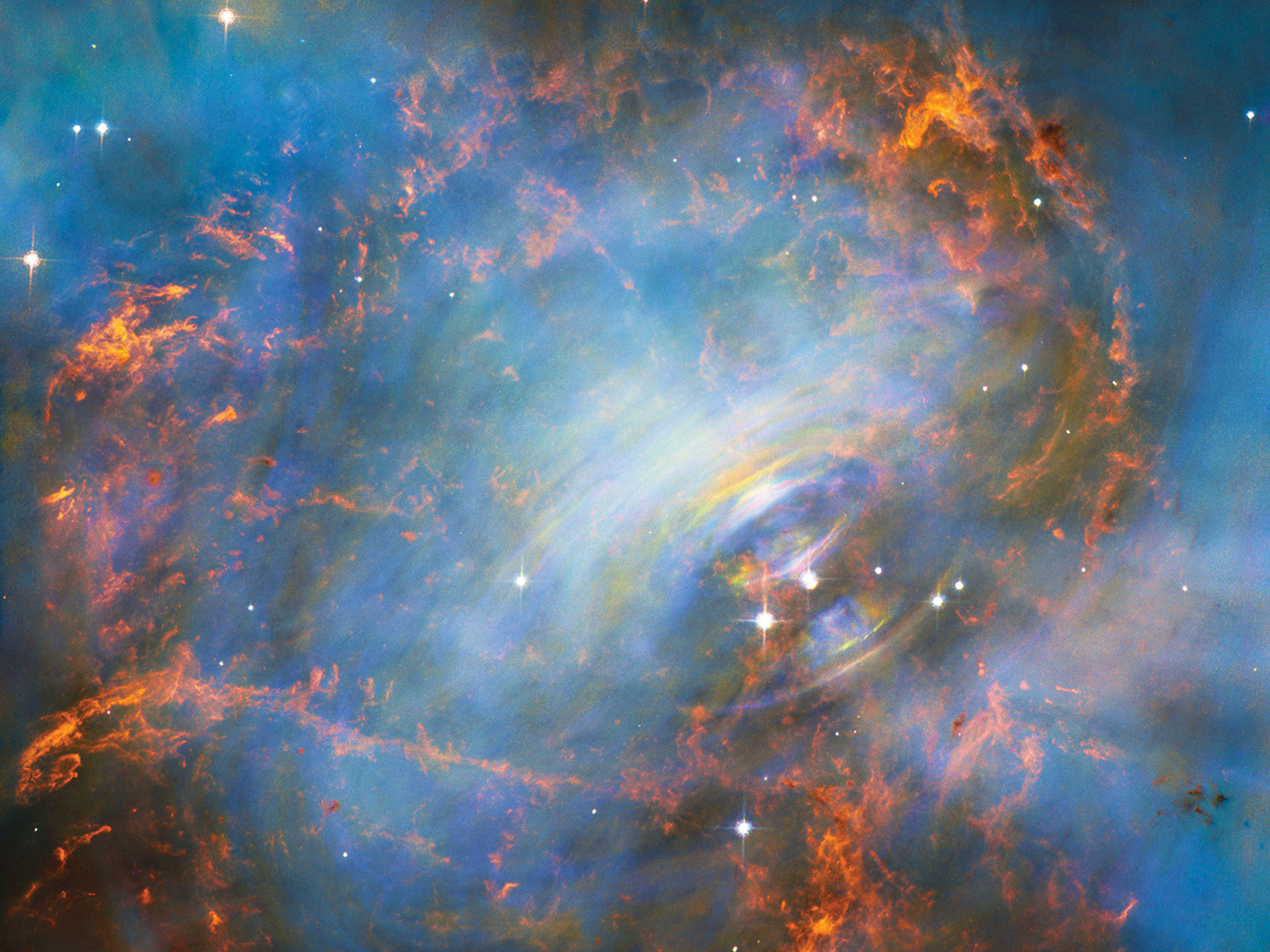 Central neutron star at the heart of the Crab Nebula.
Image credit: NASA and ESA, Acknowledgment: J. Hester (ASU) and M Weisskopf (NASA/MSFC). Adapted for use in accordance with federal copyright (fair use doctrine) law. Usage by ICR does not imply endorsement of copyright holder.

In searching for other possible “heavy element factories,” mainstream science first focused on exploding supernovas. Wikipedia claims that supernovas can expel material at velocities of up to 3 × 107 m/sec, or about 10% the speed of light.6 A paper on this claim is cited in reference 7, but no direct evidence supporting it was found.7 The primary nuclei present in the supernova debris would be lighter elements such as hydrogen and helium. If the claimed velocity of the expanding material is based on either of these elements, then the temperature of the expanding supernova debris would be on the order of 2 × 1011 °K. That is still not enough to fuel the fusion of two 56Fe nuclei but is enough to question the apparent contradiction with the searing gas cited in reference 5. It’s also interesting that the observation of supernova debris from SN1987A only revealed approximately 1.3% of the 56Co expected to be present in the supernova ejecta.8 Perhaps this is evidence of why only 56Fe and lighter elements are routinely observed in such debris.1

Mainstream science is still faced with the conundrum of where the heavy elements came from.

So, mainstream science is still faced with the conundrum of where the heavy elements came from. The supernova explosion model is shaky at best and really doesn’t appear to fit the observable data. In order to solve this puzzle, secular science turned to stepwise direct nuclear reactions.9,10 Since proton capture is unlikely due to the coulomb barrier (about 9 MeV), the most probable sequence for producing heavy elements would be consecutive neutron capture reactions followed by positron nuclear decay when the sequence reaches an unstable isotope. The models for this process are called the s-process and the r-process depending on whether the process proceeds slowly or rapidly.

Three obvious problems with these models are:

Finally, how are any of the heavy nuclei produced by these hypothesized methods distributed around the universe? 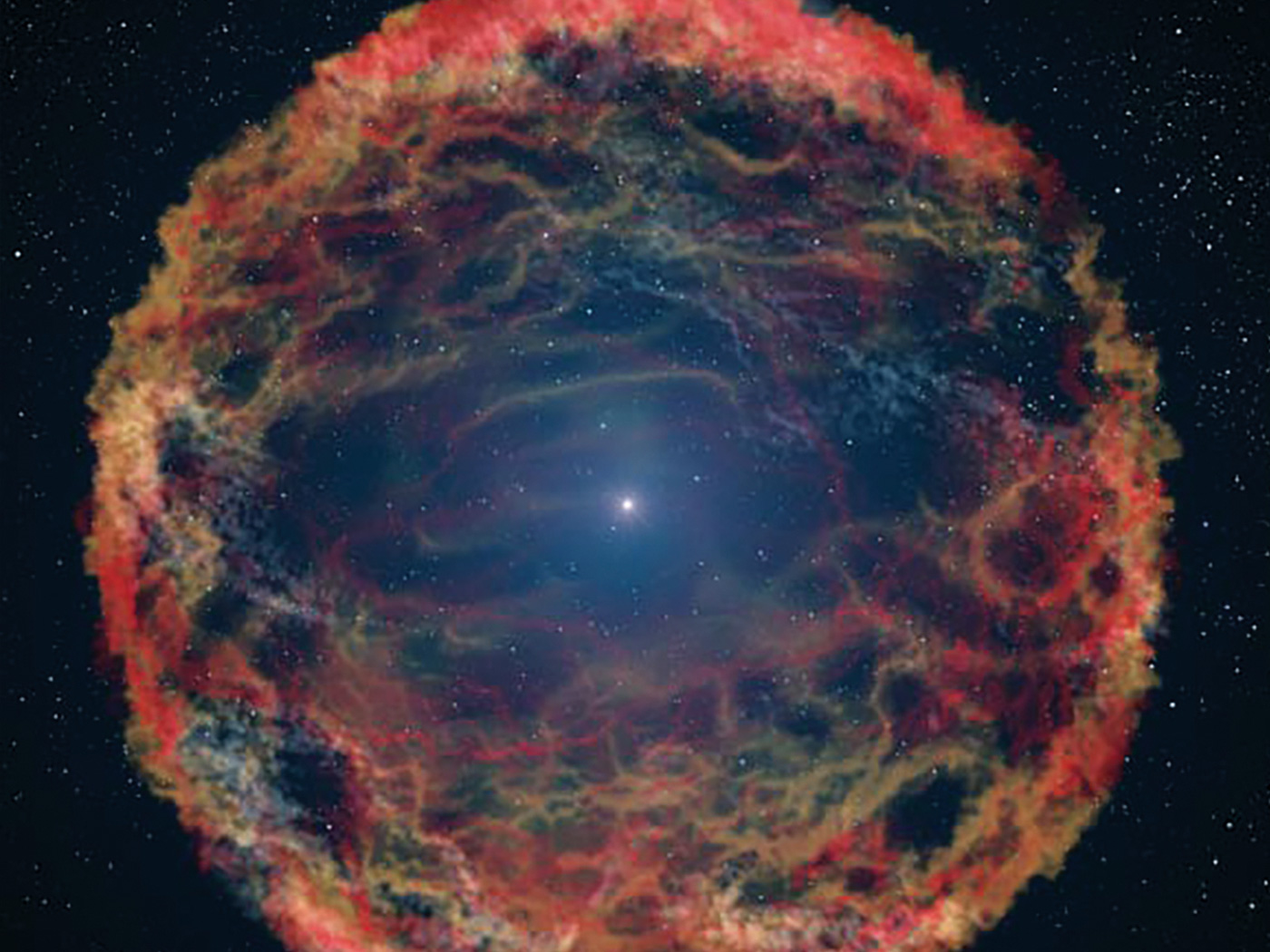 Recent observation of the collision of two neutron stars in the NGC4998 galaxy11 has offered hope of answering the question of where all the neutrons necessary for the r-process to function as hypothesized may come from. The discovery has been sensationalized12 to the point that one author states astronomers have observed “50 Earth masses’ worth of silver, 100 Earth masses of gold, and 500 Earth masses of platinum” forged by this event.13 How these masses were observed and measured is unstated. Were the strong absorption lines between 300 and 400 nm observed for silver and gold (see Figure 1)? If so, how were they converted to a mass for the silver and gold? The actual mechanism for making these elements also remains unclear. In collisions that produce as much energy as those involving two colliding neutron stars, where are the emission lines for the gold isotopes 195Au (98.85 keV), 196Au (355.684 keV), or 198Au (411.802 keV)? Observation of these lines is certainly an experimental possibility since the two primary emission lines for 56Co have been observed in the ejecta from SN1987A.8 So, observers should also see evidence for gold (Au), silver (Ag), and platinum (Pt) in the x-ray and gamma ray spectra of the collision debris. In neutron stars, the neutrons are typically in a 10 to 1 ratio with protons and electrons—so where do the elemental nuclei, which are just as necessary for the r-process as neutrons, come from? And the ubiquitous question remains, how much was already there and how much formed from the collision? 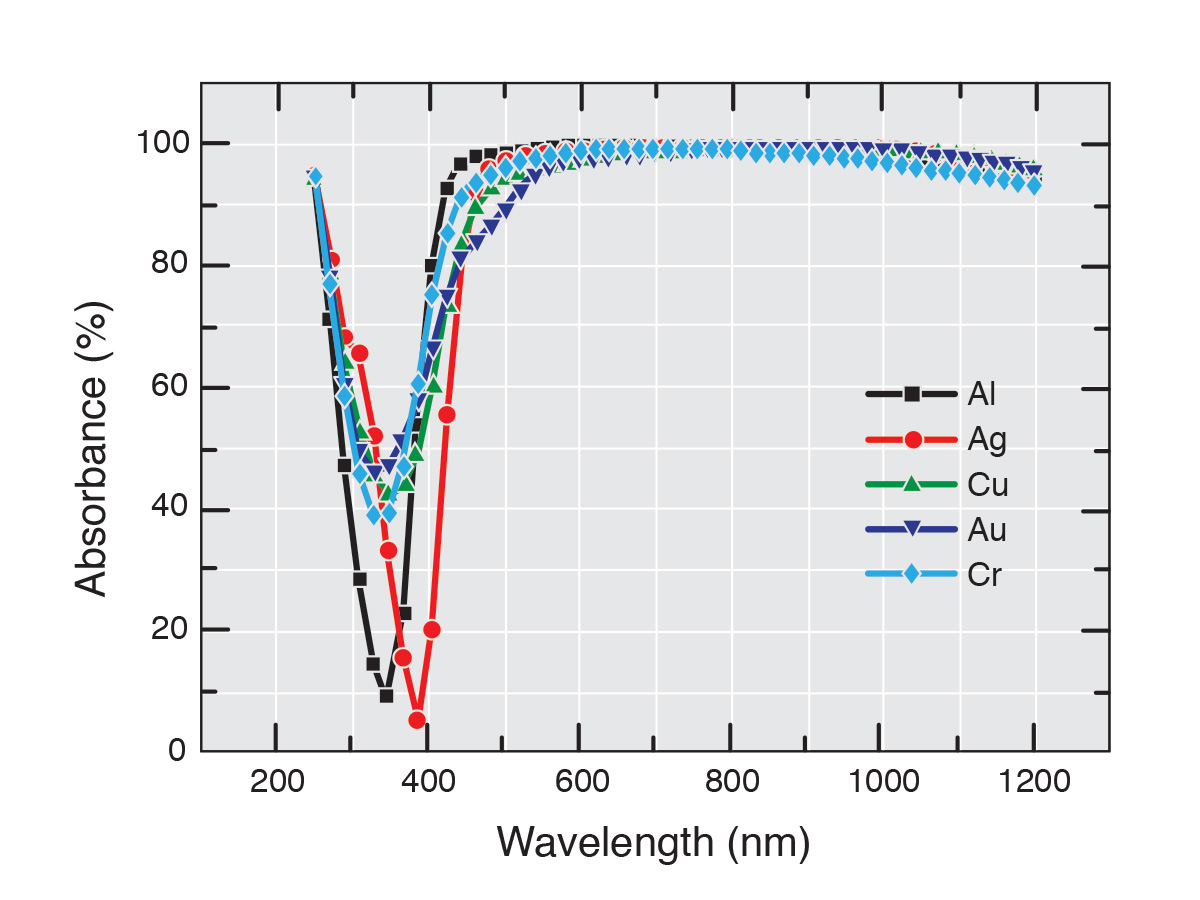 What is the actual observational evidence for the elemental makeup of neutron stars? Neutron stars are known to be small (on the order of 20 kilometers in diameter), extremely dense (it is estimated that a single teaspoonful would weigh a billion tons), rapidly rotating objects (about 43,000 revolutions/minute) with very intense magnetic fields (between 108 and 1015 times the strength of Earth’s magnetic field). Particle accelerators on Earth have reached 4 × 1012 °K during the collision of gold nuclei. Yet, there has never been any evidence of fusion occurring at these energies. In fact, at these energies the gold nuclei invariably split apart in a process called spallation—the opposite of fusion.

Too Many Unanswered Questions

The secular explanations for the origin of heavy elements have taken many turns over the years, from being produced in exploding supernovas to being produced in colliding neutron stars. All these explanations rely on extremely improbable events happening at incomprehensibly high energies over mind-numbing time frames—in essence, the energy, matter, random chance paradigm. On the other hand, a paradigm based on the biblical narrative rests on a universe purposefully designed by a Creator in which Earth was created four days before the sun, moon, and stars (Genesis 1:1-2, 14-16). Thus, any paradigm based on the veracity of this account does not allow for any elements on Earth to have come from stars.

It takes more faith to believe in the sensationalized views of the secular world than to accept the perfectly rational proposition that the universe was created by the hand of God out of nothing.

In the biblical narrative, human beings were fashioned from the dust of the earth (Genesis 2:7), not from star dust. It takes more faith to believe in the sensationalized views of the secular world than to accept the perfectly rational proposition that the universe was created by the hand of God out of nothing.