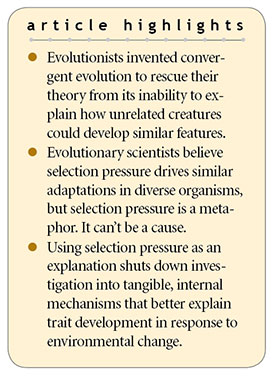 Darwin’s followers appear to be comfortable embracing totally contradictory explanations for the same thing. When diverse groups of organisms share nearly identical traits, evolutionists see that as solid evidence of descent from a common ancestor. But when similar traits can’t be due to common descent, they see it as equally solid evidence for evolution. This is called “doublethink” in George Orwell’s classic novel 1984, which features a fictional totalitarian regime that cunningly uses misnomers or deceptive redefinitions as a means of thought control.

You have to pay close attention to disentangle evolutionary “doublethink.” The fact that many organisms share highly similar, non-inherited traits is actually strong evidence against evolution, pointing instead to the information underlying common design.1 So, evolutionists invented convergent evolution, a mental construct devised to rescue their theory from conflicting observations.2 For example, they claim the echolocation ability shared by some bats and whales somehow evolved convergently through identical genetic changes in both groups.3

This is where one must carefully watch evolutionists shuffle the pea in their shell game. One shuffle moves the pea between the opposing mechanisms of “divergent” and “convergent” evolution as needed to account for similar features among diverse creatures. Then a trickier shuffle occurs. Evolutionists first use convergent evolution in the traditional sense as a magical term to explain the existence of non-inherited similarities that evolution otherwise can’t account for. Then they shuttle the meaning of the term “convergent evolution”—an imaginary process that can’t be observed—to one that includes patterns of repeatable (indeed, predictable) similarities that can be observed.

But as we have seen in this Engineered Adaptability article series, these patterns are actually better interpreted as outcomes of creatures’ innate systems and not as the results of some mystical evolutionary process. Separate populations of similar and even diverse creatures are observed over and over again rapidly and independently producing the same traits to solve similar environmental challenges. This observation could prompt a testable hypothesis that these creatures share common programming that directs the production of specific traits suitable for certain conditions.

Rather than look to creatures’ innate abilities, however, evolutionists hang their hats on an omnipotent agent of nature called selection pressure as the catalyst for adaptation. This, along with habitually tagging “convergent evolution” to non-hereditary similarities, clouds their understanding of the situation and shuts down investigation into alternate explanations. When selection pressure is exposed as a misleading metaphor underlying convergent and most divergent evolution, then the smoke will clear to reveal the vital elements of the continuous environmental tracking (CET) mechanism. This mechanism allows creatures to continuously track environmental changes as they solve challenges and fill new niches.

Selection Pressure Is a Metaphor, Not a Real Pressure

Evolutionists approach adaptation from the externalist paradigm, which sees active environments molding the body plans of essentially passive organisms over time.4 Accordingly, they have concocted the notion of a force called selection pressure acting over a population. Per Jerry Coyne, evolutionists believe selection pressures are up to the task of molding organisms into life’s diversity and that they can easily account for the widespread pattern of non-inherited similar features:

But evolution does explain the pattern by invoking a well-known process called convergent evolution. It’s really quite simple. Species that live in similar habitats will experience similar selection pressures from their environment, so they may evolve similar adaptations, or converge, coming to look and behave very much alike even though they are unrelated.5

Like Coyne, most evolutionary biologists rarely conceive of adaptive processes apart from selection pressures. These pressures have taken on a life of their own in evolutionary literature, which treats them as real forces driving organismal form toward greater diversity. Evolutionists see them accomplishing much adaptive work, but this convincingly simple narrative is misleading. “Selection pressures” are only metaphors. None have yet been scientifically quantified. The only place where they are “observed” is in imaginary visualizations.

A careful reading of Ernst Mayr’s description of selection pressure reveals that rather than being externally pressured, the organism’s internal systems are what produce traits that may or may not solve environmental challenges—which causes those traits to increase or decrease in populations.

In evolutionary discussions, it is often stated that “selection pressure” resulted in the success or elimination of certain characteristics. Evolutionists here have used terminology from the physical sciences. What is meant, of course, is simply that a consistent lack of success of certain phenotypes [the organism’s traits] and their elimination from the population result in the observed changes in a population. It must be remembered that the use of words like force or pressure is strictly metaphorical, and that there is no force or pressure connected with selection, as there is in discussion in the physical sciences.6

Indeed the language of neo-Darwinism is so careless that the words “divine plan” can be substituted for “selection pressure” in any popular work in the biological literature without the slightest disruption in the logical flow of argument.7

The evolutionary scenario including selection pressure and convergence is reasonably seen as an illusory narrative built by stacking metaphors upon many lucky coincidences. Nevertheless, Jonathan Losos of Harvard recently exclaimed, “In recent years, scientists have identified convergence in almost any type of trait you might imagine.”9 If a metaphorical external force can’t be the cause, what could explain observations of multiple organisms rapidly, independently, and repeatedly producing similar traits to solve the same types of environmental challenges? Losos’ book only offers selection pressure, which he envisions as a “strong agent of natural selection.”10 But, could it be that innate mechanisms still awaiting full description are enabling organisms to track environmental changes? Let’s look at a couple of examples. 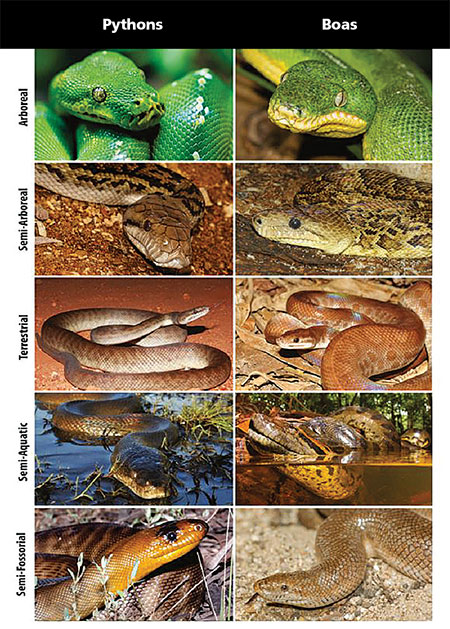 Figure 1. Boas and pythons independently and repeatedly develop many similar traits including skin texture and color, eye shape, and the size and shape of their heads that are most suitable for filling five different ecological niches.
Image credit: Copyright © 2016 John Wiley & Sons, Inc. Used in accordance with federal copyright (fair use doctrine) law. Usage by ICR does not imply endorsement of copyright holders.

Although pythons and boas are constrictors, they are altogether different snakes. For example, boas bear live young while pythons lay eggs. Evolutionists believe that their ancestors diverged between 63 and 96 million years ago.

ICR geneticist Dr. Jeffrey Tomkins reported on Scott Keogh’s research findings that pythons and boas have independently and repeatedly developed similar suitable traits for specific ecological niches.11 Keogh’s data from 1,073 specimens representing over 80% of species show that tree-dwelling pythons and boas look much more like each other than either snake looks like one of its own kind living underground (see Figure 1).12

Keogh identified that boas and pythons had separately expressed trait patterns for skin texture and color, eye shape, and head size and shape that fit them for dwelling in five different niches: arboreal (trees), semi-arboreal, terrestrial, semi-aquatic, and semi-fossorial (underground). These traits were so specific and repetitive for certain environments that they were described as “predictable”—an atypical word for random evolution.

The study didn’t document any mutations that silenced or activated genes. Nor did it explore the death of “less fit” snakes compared to “fitter” ones, and no “pressures” were quantified. Keogh found snakes with traits already suited to specific niches, yet he says:

We have demonstrated that the strong selective pressures related to habitat-use have driven the remarkable and ubiquitous ecomorphological convergent evolution among pythons, [and] boas…to this repeated evolution of the same morphologies.12

But what conclusions would he have reached if his research hadn’t been sidetracked by that metaphor-based explanation? Isn’t it reasonable to investigate whether pythons and boas may have similar sensors for environmental conditions and similar internal if-then logic mechanisms controlling expression of traits so that they produce similar responses that fit certain niches?

Hopi Hoekstra’s lab at Harvard specializes in researching field mice (Peromyscus maniculatus) in diverse environments. Her team recently showed that “from a short-tailed prairie-dwelling ancestor” for “geographically distant populations” across North America, mice living in prairies have shorter tails relative to other mice whose “longer tails have evolved repeatedly in similar forested habitat.” Interestingly, longer tails represented an increase in both the number and the length of tail vertebrae (see Figure 2), and that “variation in these traits is controlled by separate genetic loci.” Additionally, the mechanisms underlying this repetitive phenomenon were not “stochastic [random] processes,” but evidence “implicat[ed] similar mechanisms of tail elongation in eastern and western forest populations.”13

In terms of causality, the researchers believe that “it is more likely that environmental selection pressures have led to the independent evolutionary appearance of these two morphs in different maniculatus lineages”13 even though they lack the same documentation to support their conclusion that Keogh does. Given that the tail length of forest-dwelling mice seems to be controlled by similar, repetitive, non-random mechanisms in independent populations, it might prove informative to conduct research into biomechanical benefits to mice with long tails in forests, innate biomechanical sensors, and developmental programming to respond with longer tails.

A design-based, organism-focused research program is neither willing to appeal to metaphors as causes, nor satisfied to believe in a fortuitous stacking of coincidences.

A design-based, organism-focused research program is neither willing to appeal to metaphors as causes, nor satisfied to believe in a fortuitous stacking of coincidences. In our next article, we will see examples showing definite linkages between mechanosensors and internal feedback that controls expression of specific genes both during embryonic development and as adults. The result is the expression of specific traits that enable these creatures to tightly track environmental changes—consistent with the CET model. By applying engineering causality to several examples, the smoke of “selection pressure” mysticism will clear to reveal creatures actively tracking environmental changes and adapting accordingly—just as their Creator designed them to do.