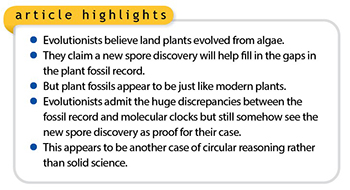 A spore is a haploid (single, unpaired chromosome), which is a single or multicellular reproductive structure produced by certain species (e.g., fungi) that detaches from the parent and gives rise to a new individual. Spores were recently extracted from Australian deposits dated by secular scientists to be 480 million years old. They maintain “these spores are of intermediate morphology [form or appearance] between confirmed land plant spores and earlier forms of uncertain relationship. This finding may help to resolve discrepancies between molecular and fossil data for the timing of land plant origins.”1 Creation scientists predict the discrepancies will not be resolved.

Evolutionists have a very difficult time bringing together the fossils of plants and comparing these fossils with DNA and protein sequences (molecular dating).

“When we consider spores as an important component of the evolution of land plants, there is no longer a gap in the fossil record between molecular dating and fossil recovery,” [study co-author Paul] Strother said.2

But who said spores are an important element of plant macroevolution? Evolutionists are certainly free to ponder that spores could be an intermediate of the otherwise troublesome evolution of land plants—and then declare the missing links have been filled. 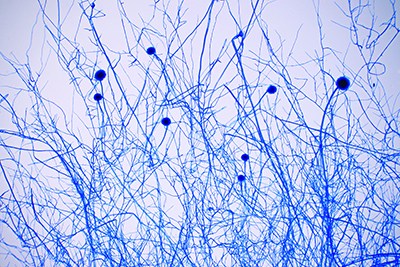 They credit evolution, not God, with putting together something as incredibly complex as portions of a genome, saying, “The fossil record preserves direct evidence of the evolutionary assembly of the plant regulatory and developmental genome.”2 But what exactly is this “direct evidence” provided by the fossil record? As always, paleontologists find that plants in the past were very much like plants today (unless they go extinct).3-5 Furthermore, how do changes in regulatory DNA sequences give us palm trees, orchids, and buttercups? One secular scientist writes:

Evidence from recent evolutionary events indicates that anatomical changes are mostly driven by changes in regulatory DNA sequences that determine when and where developmental genes are expressed. How the striking diversity in body structures has evolved over longer times remains largely unknown.6

The theory of a molecular clock7 is based on a constant rate of change in DNA sequences over time between two species and when they supposedly diverged in the evolutionary past.

However, there are huge discrepancies, up to tens of millions of years, between direct fossil data and molecular clock dates, said Strother. In addition, there are similar time gaps between the [fossils of the] oldest spores and when actual whole plants first occur. These gaps resulted in hypotheses about a “missing fossil record” of the earliest land plants…said Strother.2

Strother and co-author Clinton Foster then go on to suggest 480 million-year-old spores and “elements of both Cambrian and younger embryophyte spores…provides a new level of evolutionary continuity between embryophytes and their algal ancestors.”1 But that’s only if algae really are the ancestors of embryophytes.

Fruit trees and other seed-bearing plants were created thousands of years ago at the beginning of Day 3 of the creation week (Genesis 1:11-13).