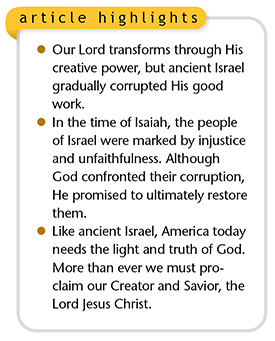 The first of seven great signs of Jesus’ deity recorded in John’s gospel is the wedding in Cana of Galilee (John 2:1-11). By the time Jesus arrived with His disciples, the consumption of wine had exhausted the supply—a matter of great social embarrassment to the hosts. Then Jesus stepped forward and, to the amazement of the servants and His disciples, revealed His miraculous creative powers by transmuting simple water into complex wine. The Lord Jesus saved the day by transforming the ordinary and mundane into the extraordinary and delightful.

Centuries earlier, the people of ancient Jerusalem had done exactly the opposite. The prophet Isaiah records that they had been “nourished and brought up” like precious children by God (Isaiah 1:2), a “faithful city” that was “full of justice” and “righteousness” (v. 21). But their rebellion corrupted what had started out as pure. “Your silver has become dross, your wine mixed with water” (v. 22). Morally and spiritually, the people of Jerusalem were no longer what they used to be. They had grown morally impure and spiritually diluted.

As the Old Testament Scriptures show, it didn’t happen all at once. The historical books of Judges and 1 and 2 Kings depict a pattern of increasing spiritual decay and apostasy, punctuated at times by national revivals under the leadership of godly prophets, priests, and kings. By Isaiah’s day, the slow erosion of godly standards had reached its peak: leadership became rebellious, thievery and bribery were lauded and rewarded, and care for needy orphans and widows was forgotten (Isaiah 1:21-23). It started at the top and worked its way down. Eventually the whole culture was polluted and diluted.

God finally chose to act. He announced through Isaiah that He would deal with the corruption personally: “I will rid Myself of My adversaries, and take vengeance on My enemies. I will turn My hand against you, and thoroughly purge away your dross” (Isaiah 1:24-25).The verses that follow make it clear His discipline was not vindictive but restorative: “I will restore your judges as at the first, and your counselors as at the beginning. Afterward you shall be called the city of righteousness, the faithful city” (v. 26). While these promises will be ultimately fulfilled in the coming kingdom age, God’s purpose—the same then as it is today—is to transform His people to a state of godly purity.

The similarities between ancient Jerusalem and our culture today are unmistakable. Now is the time for Christians to stand up and shine the light of our Creator and Savior, the Lord Jesus Christ, into an increasingly dark world. Our Adversary is “roaring” like never before, and an entire generation is growing up in a world corrupted by dross and dilution that disparage the gospel of Christ and the evidence that affirms His perfect Word.

ICR has the ability and biblical commitment to combat these threats, but not without help from God’s people to fully develop our current initiatives. If there was ever a time to help ICR with a gift of significance, now is that time. Pray for us, and please help if you are able.