I joined the science team at ICR in the fall of 2011 as a Research Associate after receiving my Ph.D. in physics. Most of my ICR research focuses on deep-ice cores and seafloor sediments, as well as cosmological and general apologetics research. 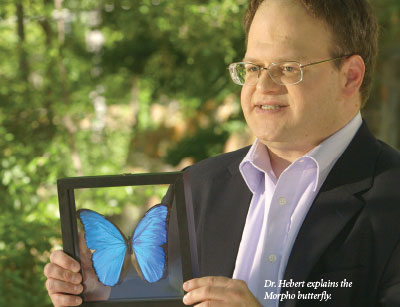 My journey to taking part in a creation research ministry started early in life. I became a born-again Christian at the age of seven, but in middle school I started having intellectual doubts about the validity of the Christian faith. Although my doubts were more of a general nature and did not center exclusively on the creation-evolution issue, it’s striking that surveys show nearly 40% of young people who no longer completely trust the Bible’s account of history had their first doubts in middle school, likely due to their first systematic exposure to evolutionary and old-earth doctrine.1

By the Lord’s providence, a close family friend loaned me the book Scientific Creationism, written by ICR’s founder Dr. Henry M. Morris. This book answered many of my questions and ignited a lifelong passion for Christian apologetics, inspiring a dream to one day enter creation ministry. I have since learned that this book also greatly influenced a number of my ICR colleagues.

Because I enjoy science, I decided to major in physics in college. I received my B.S. in physics from Lamar University and then entered the graduate program at Texas A&M University. I intended to get my Ph.D. there, but I struggled and had to settle for my master’s degree in 1999. At the time, I was very disappointed and asked the Lord why He had not granted me success in this endeavor when He knew I wanted to use my education for His glory. I even tried switching majors in a desperate attempt to kick open the door the Lord had closed—not a good idea! In retrospect, I think one reason the Lord denied me success at that time was I’d made an idol out of a Ph.D., seeing in it a source of identity and self-worth, a common trap for many academics, even Christians.

Even while teaching (college level and some high school), I was still unwilling to let it go and often found myself scheming to somehow get back into graduate school. But I finally gave up and told the Lord I could accept it if obtaining a Ph.D. were not His will for my life. Interestingly, once I did this, I started receiving hints and suggestions that I should go back to school!

After entering the physics graduate program at the University of Texas at Dallas in 2007, I chose to work with a professor doing cutting-edge research on a possible connection between fair-weather atmospheric electricity, cosmic rays, and weather and climate. Because I had long been interested in climates before and after the Flood, this was a good way to get experience in climate-related subjects.

Not long after graduation, ICR hired me. I can personally testify to the truthfulness of Psalm 37:4: “Delight yourself also in the LORD, and He shall give you the desires of your heart.” I feel that I have the best job in the world, and I am profoundly grateful for the opportunity to show people that God’s Word can be completely trusted in all matters, including science and history.

But this opportunity required a great deal of work. I would urge young people not to settle for less than God’s best for their lives—His best may require much effort and sacrifice, but it is definitely worth it.