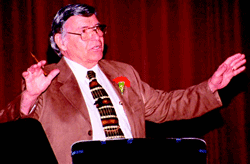 That vast "Whew!" sound emanating from the nation's halls of academia may be a giant sigh—a sigh of relief from the proud strongholds of evolutionism at the news that their nemesis—Dr. Duane Gish—has finally retired! The clear victor in almost 300 scientific debates with leading evolutionary scientists all over the world, Dr. Gish has earned a reputation as the world's leading debater for scientific creationism, and he has finally (at age 84!) announced his imminent retirement from the fields of battle.

Well, maybe! He plans to quit traveling (except to visit his grandchildren!) and speaking, but will try to write a book or two and also continue to advise other creationist scientists on how to win debates (the secret, of course, is to know the facts, and he does!). He may even accept a few special invitations to speak.

In addition to his debates, Dr. Gish has lectured on creation in hundreds of schools and churches just about everywhere—more than 40 countries and 49 states in this country (what is the matter with Maine?). And he is already a well-known author. His booklet, Have You Been Brainwashed? has been read by millions. There are also his many books, among which are: Evolution: The Fossils Say No; Creation Scientists Answer Their Critics; Evolution: Challenge of the Fossil Record; Speculations and Experiments on the Origin of Life; Evolution: The Fossils Still Say No, plus a number of books for children. Dinosaurs: Those Terrible Lizards was the progenitor of many "copycat" books by other authors. The Amazing Story of Creation from Science and the Bible has been especially appreciated by many and was followed by Dinosaurs by Design. There are others (some are out of print—see ad section for products that are still available), not to mention dozens of articles, not only about creation but at least forty journal articles in his own field of biochemistry.

Dr. Duane Tolbert Gish was born in Kansas in 1921, attending high school and junior college in Dodge City. His education was interrupted by World War II, during which he served with distinction as an Army officer in the South Pacific. After the war, he attended UCLA, receiving his B.S. in chemistry in 1949, then a Ph.D. in biochemistry from the University of California at Berkeley in 1953. He was a Postdoctoral Fellow (1953-56) as well as Assistant Professor (1956) at Cornell University Medical College, then returned to Berkeley at the Virus Laboratory of the University of California as Research Associate in biochemistry (1956-60). He had the unique opportunity of collaborating with two Nobel Prize Winners, Dr. Vincent du Vigneaud at Cornell and Dr. Wendell Stanley at Berkeley. He then worked as a Senior Research Associate in biochemistry for eleven years at the Upjohn Company in Kalamazoo, Michigan. 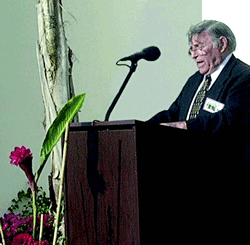 Dr. Gish had been a Christian since childhood and never doubted the Biblical record of creation. However, he became an active anti-evolutionist largely as a result of a booklet written by a Canadian physician, Dr. John Howitt. As a member of the American Scientific Affiliation, he opposed its drift toward theistic evolution. Finally, he joined with other creationist scientists in forming the Creation Research Society in 1963. There he met Dr. Henry Morris, also a member of its founding board, and they served together on the C.R.S. Board for many years.

When Dr. Morris left his position at Virginia Tech to work with Dr. Tim LaHaye in founding Christian Heritage College and its creation research division in 1970, Dr. Gish felt the Lord might be calling him also into a full-time creation ministry. He wrote to Dr. Morris suggesting such a possibility, and just a year later joined him on the College faculty, also becoming Associate Director of what soon became the Institute for Creation Research in 1972, and then Senior Vice President when ICR became a separate Graduate School in 1981.

He is widely recognized and honored by Christian creationists in many lands. One such honor came when he was given the Luther Sunderland Award at the quadrennial international gathering of creationist scientists at the International Conference on Creationism in Pittsburgh in 1994. He was given the Issachar Award by Cornerstone University (formerly Grand Rapids Baptist College and Seminary) May 7 of this year, 2005. Although his ICR colleagues and fans will miss him very much, he has certainly earned retirement status, and we all wish him Godspeed and ongoing blessings through his unique legacy.