Most Christians probably perceive the immense rock layers displayed in Arizona’s Grand Canyon as icons of “deep time,” marking the passing of millions of years. For example, respected Christian apologist William Craig wrote in 1974 that “the beautifully layered sediments evidence a slow process of formation.”1 Did beautiful layers like these require deep time to form? Not according to field observations or lab studies. A violent mudflow from a Mount St. Helens eruption deposited fine layers in less than a day.2 And water flume studies recreate the fast-flow rates that deposit particles, creating layers in moments.3

But even without these live studies, clues within Grand Canyon rocks point to catastrophic water deposition. In August of this year, I rafted down the canyon, taking note of four clues that refute a deep-time interpretation of the canyon’s existence.4 I learned that instead of illustrating deep time, the Grand Canyon layers showcase immense catastrophe.

The first clue against “a slow process of formation” is the canyon’s fossils. The Coconino Sandstone, conventionally interpreted as a windblown sand dune deposit, contains fossil trackways likely made by some kind of lizard.5 The footprints preserve claw marks, which is expected if the creature walked in wet sand. Also, fossil shells from extinct sea creatures called nautiloids inhabit the base of the Redwall Limestone.6 These also appear in the same limestone layer far removed from the canyon, implying that one huge underwater mudflow deposited them all. How could any slow process bury countless strong-swimming nautiloids and orient them to a single flow direction? 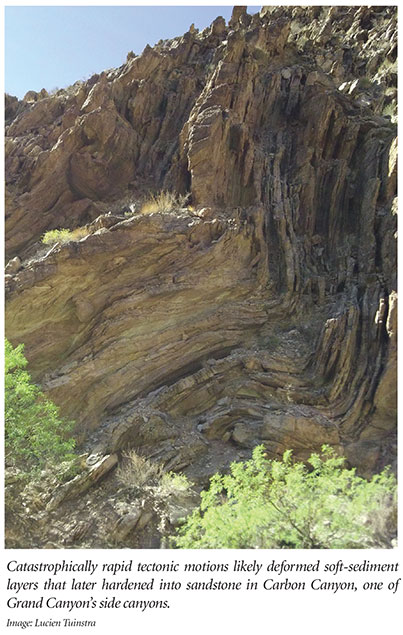 The second clue is soft-sediment deformation. Our trip included a guided tour of Carbon Canyon, one of many side canyons. There, we found entire stacks of sandstone layers tightly bent. Clearly, powerful tectonic forces uplifted and warped freshly deposited, soft, moldable land areas. If they had lithified (hardened into rock) over millennia, the brittle rock would have broken and fractured instead of bending under pressure. This incredible clue—as well as the countless fossils—implies unimaginable power that is easy to associate with the Genesis Flood.

Sharp, flat contacts between rock layers provide the third clue that refutes deep time in Grand Canyon. If thousands of years transpired after the completion of one layer and before a different layer was deposited over it, what would we expect to see? The following evidences would surface: a) Chemical weathering on the long-exposed rock, b) semblances of soil profiles that occur on land surfaces today, and c) erosion ruts where thousands of years’ worth of water runoff would have etched grooves and valleys. Imagine the drastic effects of erosion that we should see between each layer if millions of years separate them. No such features present themselves between most layers in the canyon. These strata extend remarkably flat for countless miles, telling of continuous deposition. 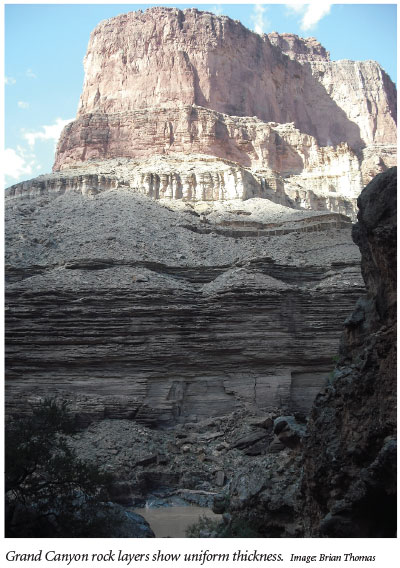 The clues so far yield a powerful implication. If watery catastrophe deposited each rock layer and its fossils and if no traces of long ages like erosion ruts lie between the layers, then it appears that a single mega-catastrophe quickly deposited all ten of the Grand Canyon’s remarkably uniform upper strata—thousands of feet thick.7

And what about their uniform thicknesses? Textbooks teach that Earth’s tectonic plates move slowly, at rates comparable to fingernail growth. Textbooks also tell us that sediments drifted down to the bottom of lakes or oceans, accumulating at the rate of one foot per several million years. Rock layers resulting from these two deep-time premises would have varying thicknesses as continents slowly tilted over time. Perhaps they would look like vast wedges. Instead, I saw even strata thicknesses for mile after mile, findings again consistent with the idea that a tremendous watery catastrophe deposited the ten strata in a very short time.

The fourth and final clue showcasing rapid catastrophe comes from “flat gaps,” like the canyon’s angular unconformity.8 This is “an erosion surface which has older strata below, dipping at a different (usually steeper) angle than the younger strata above.”9 For example, in some areas of Grand Canyon, the Tapeats Sandstone overlies a tilted shale layer that, in other places, lies below many tilted intervening layers. Where did the missing layers go? 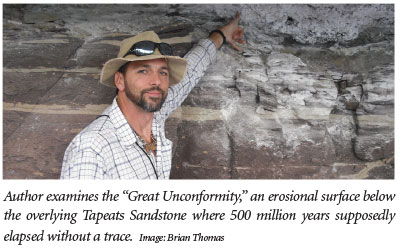 If those intervening layers were deposited over hundreds of millions of years, then the flat gap represents a many-million-year hiatus. The problem is that no evidence of eons presents itself. The layers lie flat and smooth—without signs of everyday erosion. In other words, if chemical weathering and erosion ruts would form between two layers separated by only hundreds of thousands of years, then how much more would form after hundreds of millions of years? And yet no weathering or everyday erosion appears at the angular unconformity that I saw—just flat, sharp contacts. Although flat gaps represent gaps in rock layers, they do not appear to represent gaps in time.

Evaluating Evolutionary Claims
Hello, my name is Dr. Jerry Bergman. I‘m a new member of ICR‘s staff, but I‘m not new to this ministry. I have been reading ICR‘s...
BY: STAFF WRITER