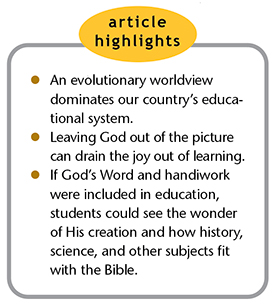 Evolutionists often see themselves as champions of learning and education—proponents of “enlightenment” fighting the forces of ignorance and superstition, largely represented in their minds by conservative Christianity. It’s painfully obvious that the quality of education, at least here in the United States, has greatly deteriorated over the years. And there is simply no way that evolutionists can blame this educational decline on creationism or Christianity, since these worldviews have been effectively outlawed from public classrooms.

One can’t help but wonder if the secularization in our public schools is directly robbing children of the joy of learning. Psalm 111:2 says, “The works of the LORD are great, studied by all who have pleasure in them.” Many Christians have personally experienced the truth of this verse as they delight in God’s handiwork. ICR’s Dr. Randy Guliuzza is fond of saying, “Worship should be the normal response to science.” In fact, creationist physicist James Clerk Maxwell had Psalm 111:2 inscribed in Latin above the main entrance of the famous Cavendish Laboratory at Cambridge University.

Many of us have painful memories of boring classroom experiences that we endured rather than enjoyed. Evolution can’t be entirely blamed for that. Teachers—even Christian teachers—who aren’t passionate about their subject matter can turn students off to it.

Many students dread mathematics, but would they have warmed up to the subject if they had been told:

How much more exciting would biology classrooms be if instead of carefully avoiding the overwhelming evidence for design in living systems, God’s handiwork was openly acknowledged and admired? Would astronomy class have been more pleasant if instead of just learning facts and equations, the class took time to savor the beauty of the heavens the Lord made? What if students were shown how our solar system abounds with evidence of a youth that matches the Genesis record?7

Perhaps it’s a pipe dream to hope for such things in the public school system.8 But surely teachers in Christian schools can share this knowledge with their students, and Christian parents and grandparents can share it with their children. The Institute for Creation Research routinely receives reports from Christians who are delighted to learn that science confirms the truth of Scripture. And visitors to the ICR Discovery Center for Science & Earth History make similar comments.

Perhaps it shouldn’t surprise us that a proper relationship with the Lord can result in pleasure and delight in learning and many other areas. And the redeemed will have an eternity to enjoy God’s presence: “In Your presence is fullness of joy; at Your right hand are pleasures forevermore” (Psalm 16:11).