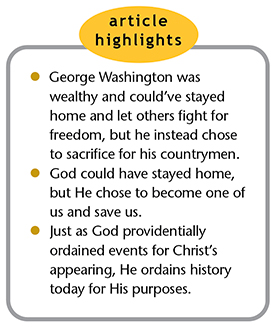 Wintry-mix weather dominated Christmas night in 1776 as General George Washington and his boat-ferried troops crossed the Delaware River to surprise the British and Hessian mercenary forces encamped at Trenton.1 It was freezing cold, with “nor’easter” winds blasting the night in what felt like, to one soldier, a “hurricane.” The sneak attack was brazenly bold and stunningly successful—Washington’s troops quickly overran the British garrison, capturing 1,000 of 1,400 soldiers and obtaining much-needed supplies while losing only three Americans.

But Washington didn’t need to fight this battle or any of the war’s battles. As a plantation owner with lucrative tidewater fisheries, Washington could’ve conveniently stayed home at his Mount Vernon plantation, growing field crops and netting literally millions of Potomac River fish.2 But Washington cared more for his fellow colonists’ security and liberty, so he sacrificed his convenience to give selfless service.

What Washington did at the finite and fallible level, God Himself did—by His incarnation in what we call Christmas—to an infinite and flawless degree when our Creator came into His own creation as the Redeemer.

He was in the world, and the world was made through Him, and the world did not know Him. He came to His own, and His own did not receive Him. But as many as received Him, to them He gave the right to become children of God, to those who believe in His name. (John 1:10-12)

The Lord Jesus could have “stayed home” as we, His human creatures, self-destructed on Earth. But Christ chose to leave convenience and comfort and the glories of heaven to insert Himself into His own space-time creation to redeem us from our sins and our sorrows.3

What Christ did 2,000 years ago was incomparably more bold and surprising—and everlastingly impactful—than General Washington’s Christmas-night crossing of the Delaware in 1776. Christ’s incarnation set history’s stage for His substitutionary crucifixion, burial, and resurrection.4

George Washington’s life also reminds us of another life-or-death benefit that Christ has given us, without which none of us could ever know or enjoy God. Washington’s very life is illustrative proof of God’s earlier providence—centuries before—when Washington’s own family lineage was at risk in another battle.

What if there had been no George Washington to “father” America?…His fate was at mortal risk on October 14, 1066, at the Battle of Hastings, where his own forefather the Norman duke William succeeded in conquering England. If the battle had gone the other way and William the Conqueror had died, then he would not have been alive to have a son named Henry (England’s Henry I), who was born two years after the Battle of Hastings. Since George Washington is a direct descendant of Henry I, Washington wouldn’t have been born roughly 700 years later.5

God’s providential workings at the 1066 battle to preserve the lineage that led to George Washington’s later presence that 1776 Christmas night are but one instance of His larger work in human history. Before Christ’s coming at Bethlehem to become our personal Redeemer, He was first our personal Creator who carefully coordinated the many historical events in prior generations needed to bring that about. Without Him, we ourselves would never have arrived on planet Earth!6

Jesus is the Reason for this season. He came as Savior. And as Creator, He providentially orchestrates procreation so we’re born as the exact humans we are.