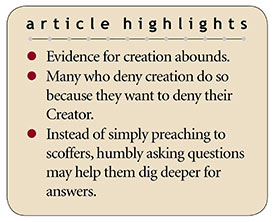 Extraordinary designs found all over the world simply demand divine creation.1 But people who reject God’s Son and the salvation He supplies often reject this clearly seen evidence as well. How can believers shape spiritual conversations in the face of such strong anti-Creator bias?

Certain folks simply don’t want to believe in creation. They invent objections to truth that, like smokescreens, shield them from God. The Lord Jesus cut through smokescreens to the root of unbelief when He said to Nicodemus:

“And this is the condemnation, that the light has come into the world, and men loved darkness rather than light, because their deeds were evil. For everyone practicing evil hates the light and does not come to the light, lest his deeds should be exposed.”2

At least for some, evil deeds, not scientific evidence, prompt doubts about creation. How can believers make headway in this situation without sermonizing? Jesus again points the way. During a tense dinner conversation, our Lord used “mirror questions” that got to the root issue with unbelieving Pharisees.

Now it happened, as He went into the house of one of the rulers of the Pharisees to eat bread on the Sabbath, that they watched Him closely [for a flaw]. And behold, there was a certain man before Him who had dropsy [painful body swelling]. And Jesus, answering [their unspoken thoughts], spoke to the lawyers and Pharisees, saying, “Is it lawful to heal on the Sabbath?” But they kept silent. And He took him and healed him, and let him go. Then He answered them, saying, “Which of you, having a donkey or an ox that has fallen into a pit, will not immediately pull him out on the Sabbath day?” And they could not answer Him regarding these things.3

Jesus’ questions led the Pharisees to realize that their man-made law that healing “work” was not allowed on the Sabbath actually condemned them, not Him. Who among them would fail to tend his own animal on the Sabbath, though no animal is as important as a human being? The Lord Jesus did not discuss evidence with these religious hypocrites. Instead, He asked thoughtful mirror questions.4

So, the next time a friend objects to creation or salvation, try a mirror question that helps identify a root cause of unbelief. For example, if they doubt that God exists because of all the evil He allows in the world, then ask where they think the universal moral code that defines evil came from.

Mirror questions, when asked gently and humbly, show you care for the questioner and help bridge the broad chasm between light and darkness.

Or say that someone objects to a Noah’s Ark that could “never hold all of Earth’s species.” Instead of telling how a biblical “kind” can include many modern species,5 calmly ask how he so clearly knows that the Bible’s kinds equal today’s species. Ask if he would have any interest in learning evidence for the feasibility of Noah’s Ark. If not, why not? Mirror questions, when asked gently and humbly, show you care for the questioner and help bridge the broad chasm between light and darkness.6