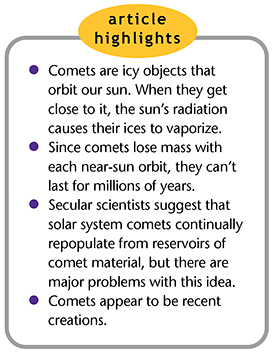 A comet in the night sky is an awe-inspiring sight (Figure 1). People throughout history have sometimes seen comets as portents of doom. However, God warned the people of Israel not to fear such signs in the heavens:

Comets are indeed a sign of sorts, but not in the way many ancient people thought. 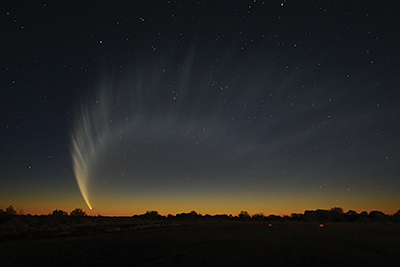 Although comets are known for their long, beautiful tails, a tail isn’t necessary for an object to be a comet. Comets are defined as solar system bodies that have at least a temporary visible atmosphere, or coma, even if a tail isn’t present.2

Comets are comparatively small, with typical diameters of about 10 kilometers (six miles).3 They are composed of a mixture of rock, dust, and frozen ices, including water ice, and have been described as “dirty snowballs.”

When a comet’s trajectory brings it close to the sun, solar radiation causes the ices to vaporize, and the escaping gases often carry dust along with them. The released dust and gases form a coma and usually two tails, one composed of charged gas particles (ions) and another composed of dust. The gas tail always points directly away from the sun because the ionized gas particles are pushed away from the sun by the solar radiation. A dust tail isn’t always present, but when it is it’s curved because the heavier dust particles are not influenced as much by solar radiation (Figure 2). 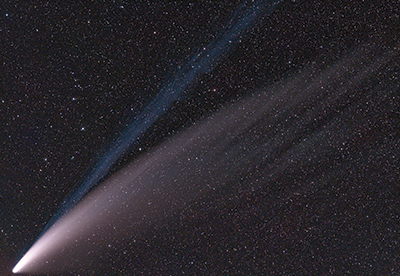 Secular scientists claim that comets are leftover fragments from the formation of the solar system 4.6 billion years ago. If comet nuclei are billions of years old, why are thousands of comets still visible? Creation scientists would argue that this is because both comets and our solar system are only about 6,000 years old.

If the solar system really is billions of years old, then new comets must somehow replace the old ones that die out. Secular scientists have suggested that comets are replenished by reservoirs of comet nuclei. Because different comets have different kinds of orbits, they think more than one such reservoir is needed.

Comets can be classified into two broad categories: long-period and short-period comets. Long-period comets are those that take more than 200 years to orbit the sun. They have very long, stretched-out orbits, and these orbits can be highly inclined to the ecliptic plane—the plane of Earth’s orbit around the sun. Creationists think that God simply created these comets with very large orbits and that we are now seeing many of these long-period comets for the first time.

Short-period comets take less than 200 years to orbit the sun. These comets can be further subdivided into two categories: Halley-type comets (HTCs) and Jupiter-type comets (JTCs). HTCs are designated as such because they have orbital characteristics similar to those of the famous Halley’s Comet. Their orbits are sometimes highly inclined to the ecliptic plane.5 Some HTCs are said to have retrograde orbits because they orbit the sun “backwards” compared to the planets.6 Their orbital periods are between 20 and 200 years.5

JTCs have orbits that generally lie between Mars and Jupiter, and it’s thought their orbits are significantly and frequently influenced by Jupiter.7 Their orbits tend to lie near the ecliptic plane, and they have orbital periods of less than 20 years.8

Secular astronomers have proposed two or three different reservoirs of potential comet nuclei (Figure 3). One of these is a doughnut-shaped collection of bodies beyond the planet Neptune called the Kuiper Belt.9 This is older terminology, and since these bodies orbit beyond Neptune they are often called trans-Neptunian objects (TNOs). I use the older term here to clearly distinguish between this group of TNO bodies and another collection of TNOs called the scattered disk. Because both Kuiper Belt objects (KBOs) and Jupiter-type comets tend to orbit near the ecliptic plane, the Kuiper Belt is usually said to be the source for JTCs. It’s thought that gravitational nudges by Neptune can cause KBOs to move toward the sun, enabling them to become visible comets. 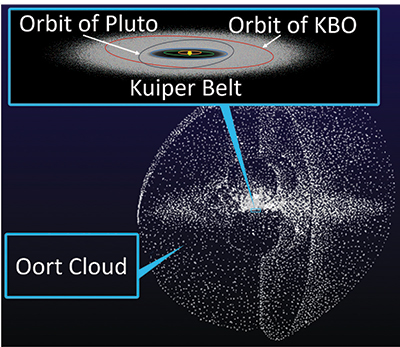 However, it’s not clear that the Kuiper Belt contains enough material to serve as an adequate source for the JTCs. Comet nuclei are generally hundreds of meters to tens of kilometers in diameter, with a few that are roughly 100 kilometers across. But nearly all identified KBOs are at least 100 kilometers across, with some (like Pluto and the other dwarf planets) thousands of kilometers in diameter. Nearly all observed KBOs are much too large to be comet nuclei. Secular astronomers think collisions between larger KBOs can result in smaller objects that could serve as comet nuclei and that these smaller objects are too small and dim to be detected. This may be reasonable, but the true number of smaller KBOs is “quite uncertain.”10

What about the Halley-type comets? Scattered disk objects (SDOs) are objects beyond Neptune that can have more extreme elongated orbits with high inclinations to the plane of the solar system. Their name is due to the fact that their extreme orbits are thought to be the result of “scattering” due to gravitational interactions with the giant gas planets. Some scientists count the SDOs as part of the Kuiper Belt, while others consider them as distinct from it.

Because both SDOs and HTCs can have highly inclined orbits, secular astronomers used to think that the scattered disk was the source of HTCs. However, they later concluded that the scattered disk contains only about a tenth of the material needed for it to act as a source for new HTCs. For this reason, some astronomers now claim that the Oort cloud is the source for new HTCs in addition to being a source for long-period comets.11 But one expert has acknowledged that the details of how this might work are “controversial.”12

The Oort cloud is thought to be an enormous cloud of trillions of icy comet nuclei. It supposedly consists of an inner disk-like cloud of comet nuclei and a much larger outer spherical shell (Figure 3). However, there is an obvious problem with the idea that the Oort cloud can act as a source for new comets, one that was acknowledged even by prominent secularists Ann Druyan and Carl Sagan: “There is not yet a shred of direct observational evidence for its [the Oort cloud’s] existence.”13

The lack of observational evidence for the Oort cloud is the least of its problems. Remember that secular astronomers think comets are leftovers from the solar system’s formation 4.6 billion years ago. According to their theory, the comet nuclei that eventually ended up in the Oort cloud would have originally formed much closer to the sun. Interactions with the planets then supposedly caused these comet nuclei to migrate to much greater distances from the sun to form the Oort cloud. However, a computer simulation showed that most of the nuclei would have been destroyed during the migration process.14,15 This would make the mass of the Oort cloud much less today than scientists’ estimates.

This may be one of the reasons experts have acknowledged that the standard Oort cloud theory is incapable of accounting for the observed number of long-period comets.16 They have proposed that our sun formed near a cluster of other stars and that it somehow “stole” comets from these stars.16,17 But as in the case of the Oort cloud itself, this idea is highly speculative.

Another problem with the Oort theory is that it tends to overpredict the number of returning long-period comets compared to the number of first-appearing long-period comets. In order to bring the theory into alignment with observations, Jan Oort invoked an ad hoc “fading parameter.” However, one author said, “Still, the uncertain nature of the fading parameter on which its [the Oort theory’s] success depends remains disconcerting.”6 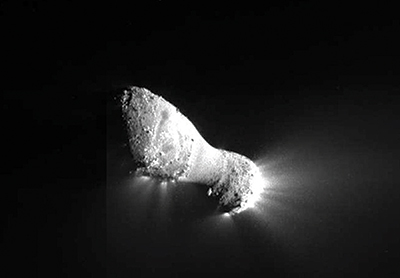 Figure 4. Secular scientists were shocked to find that Comet Hartley 2 is still outgassing carbon dioxide, even though it is supposedly billions of years old.
Image credit: NASA/JPL-Caltech/UMD

Scientists were shocked to discover that the dumbbell-shaped Comet Hartley 2 still contains a large amount of carbon dioxide and that this CO2 was outgassing from the comet nucleus.

Its [Comet Hartley 2’s] nucleus contains an abundance of carbon dioxide (CO2—or, in solid form, dry ice). This is a volatile material—it burns [turns to gas] easily—and so scientists would expect much more of it to have burned away in the 4.5 billion years since the comet formed along with the rest of the solar system.18

A news report said this presence of large amounts of carbon dioxide was “inexplicable.”18 It’s not hard to see why. The abundance of CO2 would require outgassing to be ridiculously slow for billions of years, or else Comet Hartley 2’s CO2 content was replenished somehow. Did CO2 gas flow from interstellar space back inside the comet nucleus? It makes sense for CO2 to be escaping from the comet nucleus to outer space but not for it to be flowing back in! But if Comet Hartley 2 is just thousands of years old, the continued presence of volatile CO2 in its interior is much easier to explain.19

Comets’ short lifetimes and the absence of a plausible way to replenish them over billions of supposed years testify that our solar system is young, fully consistent with the Bible’s 6,000-year timescale. Comets are a reminder that since God’s Word has told us the truth about Earth’s history and the creation of the universe, we can also trust it to tell us the truth that God loves us, and if we turn from our sins and believe in the Lord Jesus Christ we have God’s gracious promise of salvation and eternal life.20