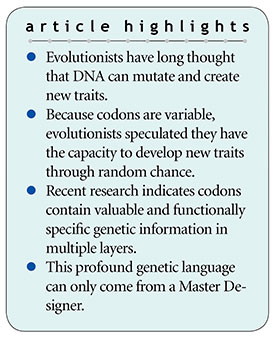 A popular meme of evolutionary speculation is the belief that many DNA sequences in the genome have the capacity to freely mutate and thus can function as a mechanism for creating new selectable traits that help creatures evolve. This idea was initially applied to genes’ protein-coding regions.

Proteins are chains of amino acids whose specific sequences are defined in genes’ coding regions within chromosomes. Copies of genes are made using RNA and then processed to contain only the coding regions. These RNA messages are taken out of the cell’s nucleus, which houses the chromosomes, and transported into the cytoplasm to make proteins using specialized machines called ribosomes. When an RNA is decoded, each three-base sequence, called a codon, specifies a single amino acid in the protein sequence.

This profound genetic language can only come from a Master Designer.

Codons were initially thought to possess redundancy because there are 61 of them, compared to only 20 amino acids. The first two RNA bases in the sequence stay the same, but the third base is variable. For example, the codons GGA, GGC, GGU, and GGG all specify an amino acid called glycine, even though the third base is different. As a result, the third base was deemed degenerate and referred to as codon wobble. Evolutionists originally believed that this variability in the third base left room for evolution to somehow work its magic since they thought DNA at these “degenerate sites” could mutate without affecting the resulting protein.

While the idea of codon degeneracy has been promoted for years as a viable place in the genome where evolution can occur and actually be measured, research discoveries over the past decade have increasingly discredited this concept. Perhaps the most exciting discovery is that other codes are embedded within and overlay the codons.

In one study, it was found that a different set of code overlaying the codons instructs cellular protein machinery called transcription factors, which control the expression of genes, where to latch on to the DNA inside genes.1 While one group of codons delineates the amino acid order in a protein, the exact same sequence of DNA letters can also instruct cellular machinery where to bind to the gene to make the RNA copies needed to make a protein. Researchers called these codes duons.

As if the presence of two overlaying codes in the same sequence was not enough, another discovery showed that the third base in codons also regulates the rate of RNA being copied from a gene, along with the levels of RNA copies that are made.3 This also has a downstream effect on the amount of protein that is produced.

Now an additional research report is showing that a fourth code exists in the third base of codons that is related to the overall efficiency of the cells’ protein production. Since many proteins from many genes are made at once, the fundamental resources allocated to each type of protein (transfer RNAs) are critical. Like factories that make multiple products, all the assembly lines need a steady supply of parts, and the processes need to be perfectly orchestrated. This complex coordination and resource distribution are affected by the third base in codons.4

An all-powerful Creator is the only explanation for genetic code.

Expert human computer programmers can only write a line of code with a single directive. An all-powerful Creator is the only explanation for genetic code that has up to four different layers of instruction in the same sequence of information.

What's All the Flap About?
In the last few decades, there has been a lot of discussion by prominent paleontologists who imply that dinosaurs and birds are closely related. Many...
BY: TIM CLAREY, PH.D.

Venus Likely Geologically Active
In June 2021, researchers used radar images from the Magellan spacecraft to show that crustal blocks on the Venusian surface jostle against one another...
BY: JAKE HEBERT, PH.D.

Tree Rings, Varves, and the Age of the Earth: An Update
In 2010, the BioLogos Foundation published a paper by geologists Gregg Davidson and Ken Wolgemuth (D&W) titled “Christian Geologists on Noah’s...
BY: JAKE HEBERT, PH.D.
The Latest
NEWS   ACTS & FACTS   PODCASTS