Apparently, it's time to alter biology and anatomy textbooks again. There's much more to mitochondria than we ever thought. Researchers revealed that these tiny cellular power houses are highly organized to efficiently deliver ATP energy. They interconnect throughout muscle cells, forming a gigantic mitochondrial network. Researchers published this stunning discovery in Nature, calling it the "mitochondrial reticulum."1 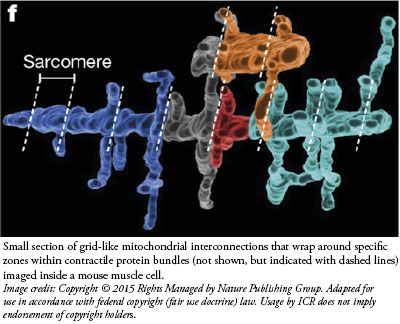 The interconnected mitochondrial net wraps around long, tubular, protein bundles that contract inside cells to make muscles move. This design efficiently delivers the right fuel to the right place at the right time and in the right quantity. But the scientists found more.

Variable voltages maintained throughout the network fuel the mitochondrial machines that generate ATP. In other words, carbohydrate chemical energy enters the mitochondrial reticulum near the source, gets converted to electric energy which travels deep into the muscle cell, and that gets converted to ATP chemical energy right where muscle proteins need it the most. It's a brilliant manufacturing and distribution array "that resembles the wire grid that distributes power throughout a city."2

If real people designed and built power grids in cities, it stands to reason that a real Person made miniature mitochondrial power grids in muscle cells, which are even more complicated and more tightly regulated than human-engineered systems.

Why Reinvent the Wheel?
by Randy J. Guliuzza and Aaron T. Guliuzza* Most of us know the phrase “Don’t reinvent the wheel.” It means that we hope to take the...
BY:  VARIOUS AUTHORS

Eighty-Five Reports of Biological Remnants in Fossils
A new review paper published in the journal Expert Review of Proteomics summarizes 85 reports of organic remains in fossils.1 Some of the...
BY: STAFF WRITER

Tree Rings, Varves, and the Age of the Earth: An Update
In 2010, the BioLogos Foundation published a paper by geologists Gregg Davidson and Ken Wolgemuth (D&W) titled “Christian Geologists on Noah’s...
BY: JAKE HEBERT, PH.D.
The Latest
NEWS   ACTS & FACTS   PODCASTS