Can Iron Preserve Fossil Proteins for Eons? | The Institute for Creation Research
Skip to main content

News reports around the world tell of red-blood-cell-like and collagen-like structures found in 75 million year-old dinosaur bones long stored in the British Museum. This news coincides with the release of the film Jurassic World, in which fictional scientists resurrect dinosaurs using dino DNA that "iron chelators" somehow preserved for millions of years.1 Though the movie is fiction, it does refer to a real study involving blood and bone. However, a closer look at the relevant chemistry shows that the iron-as-preservative story may be just as fictional as Jurassic World.

The University College London research team published their new finds in the journal Nature Communications. Scientists collected the bones and bone fragments from Alberta, then deposited them in drawers decades ago. New techniques now reveal unexpected proteins and cell-like features. Microscopic filaments spaced at about 67nm were tell-tale signs of bone collagen.2 In living creatures, bone-building cells deposit these protein fibers in rows to give bone its nearly optimal balance between rigidity and flexibility.3 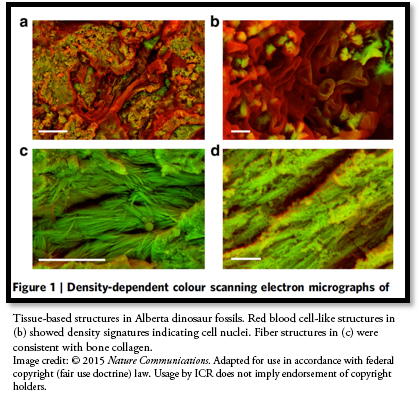 What exactly is at stake with this discovery? The Nature Communications study authors wrote, "In particular, it has long been accepted that protein molecules decay in relatively short periods of time and cannot be preserved for longer than 4 million years."2

To make the story seem more believable, some scientific-sounding reason was needed to explain why tissues could have lasted tens of millions of years. An iron-as-preservative explanation seemed to fit the bill. In a Jurassic World promotional video, a fictional scientist says, "With the recent discovery that soft tissue preserved by iron chelators can produce gold mines of DNA, we can put the puzzle pieces together much faster than before."1

However, this "recent discovery" never actually held claim to producing gold mines or even scraps of DNA. Instead, it showed how purified blood puree can keep bird blood vessels from rotting for two years at room temperature—hardly the kind of scientifically rigorous experiment needed to show how collagen proteins can last millions of years in an outdoor environment. In the 2013 report, published in Proceedings of the Royal Society B, researchers proposed that a certain class of chemical reactions involving iron and hydroxyl promoted reactions that may have preserved proteins for millions of years.4

First, what would bring the iron and hydroxyls to the bone tissues other than moving water? One of the first lessons in biochemistry is that water breaks apart proteins, degrading the very tissues they suggest iron would help preserve.5 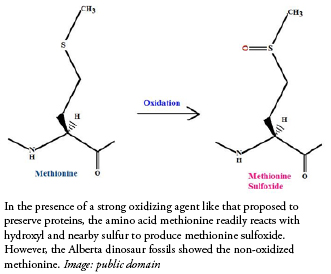 A second observation that proponents of the iron-and-hydroxyl-preservation hypothesis appear to ignore follows a similar line. The amino acid methionine is particularly susceptible to a strong oxidizing agent like hydroxyl, which would quickly oxidize methionine into methionine sulfoxide. The Nature Communications study results revealed un-oxidized methionine in some of their Alberta dinosaur specimens.5 Those who want their hydroxyl cake will have to eat it, too. They have not explained how iron and hydroxyl selectively reacted with proteins in a way that would preserve them, but fail to react with methionine in the most natural way known.

Third, the experimenter destroyed red blood cells to release their trapped iron, then bathed bird-bone tissues with the purified and concentrated soup. But these new Nature Communications results clearly showed blood cell shapes still intact. How could iron preserve bone tissues if it never escaped red blood cells in the first place? Plus, what natural process in the supposed Jurassic world could have mimicked the elaborate blending, filtering, concentrating, and bathing procedures used in the lab? Such laboratory finagling doesn't accurately represent natural environments.

Even granting that iron and hydroxyls reached bone tissues, they would overwhelmingly destroy the tissues, not preserve them! Innumerable experiments show these strong oxidizers chemically shred proteins and tissues. In a 2007 report describing this type of reaction, biochemist Josef Prousek of the Slovak University of Technology wrote, "Due to its strong reactivity with biomolecules, hydroxyl radical is capable of doing more damage to biological systems than any other reactive organic species."6 How is iron and hydroxyl supposed to preserve tissues if it actually damages them?

As a fifth and final observation, the Nature Communications results showed no blood or iron remnants on its bone collagen fibers. Actually most other "soft tissue" fossil finds published in science journals for the last five decades show neither blood nor evidence that blood or iron was ever there. Of course, it would be difficult for iron and hydroxyls to help preserve a dinosaur fossil from Alberta if they were never in contact with its tissues.

These observations leave the iron and hydroxyl hypothesis in Jurassic dust. And although scientists could never really bring back dinosaurs from the dead, maybe it's time to resurrect the old, biblical idea that dinosaurs and other creatures were buried only thousands of years ago. This stands as the most scientifically responsible way to explain why so many original biochemicals in dinosaurs and other fossils, including these that had been resting in museum drawers for about a hundred years.7