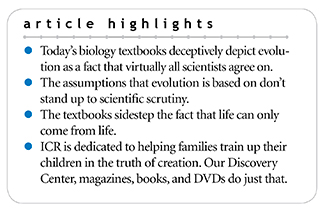 There are many warnings in Scripture of the power that deception can have. The manipulation and misrepresentation of factual truth and biblical insight can undermine our faith and confidence in God’s Word. The apostle Paul cautioned the church at Colossae: “Beware lest anyone cheat you through philosophy and empty deceit, according to the tradition of men, according to the basic principles of the world, and not according to Christ” (Colossians 2:8).

Paul challenged young Timothy to avoid the “falsely called knowledge” since it would cause some Christians to stray from their faith. We live in an age that could well be a candidate for the most deceptive age since the one before the great Flood of Noah’s day. The twisting and distortion of facts by evolutionary naturalism are brazen in their falsehood but extremely shrewd in their presentation.

Recently, Dr. Neal Frey carefully analyzed a potential series of biology textbooks that are recommended for acquisition by Texas schools.1 Because those recommendations affect the purchase of tens of thousands of textbooks, many other state schools across the nation are likely to acquire the same books. These textbooks will be required reading and the source for mandated instruction throughout public schools.

Christian parents must be prepared to cope with the sophisticated shaping of this “falsely called knowledge” foisted on their children and taught by gifted instructors and “expert” proponents of the open onslaught against the Bible’s message. The following insights, drawn from Dr. Frey’s analysis, will help you teach your children to become critical thinkers, enabling them to tell truth from error. 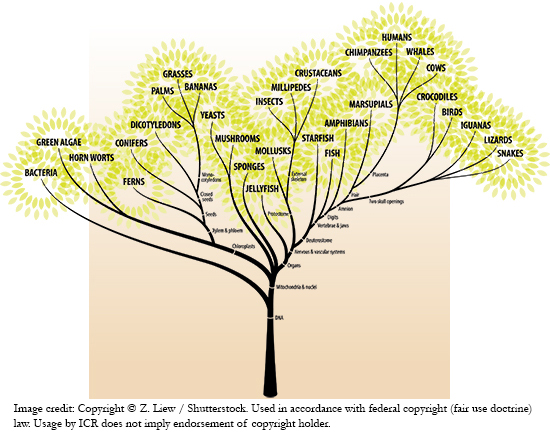 The textbooks never note that the trees based on biochemical similarities often contradict each other. Nor is it ever mentioned in these textbooks that no amount of deep time is sufficient to enable the evolutionary development of any branch of these trees, let alone an entire tree itself. This body of “falsely called knowledge” is simply presented as known and accepted fact among the expert scientists of our day.

The implied argument is that all scientists have accepted the inferred evidence from these dissimilar trees as sufficient evidence to know that evolutionary development has been the process that has driven the upward growth in complexity and diversity of life over the ages.

The massively discrepant facts openly declared as science in these evolutionary trees are carefully obscured by vaguely defining evolution as “descent with modification” or “change over time” without specifying descent from what with which modification(s) or exactly which changes from what over time. Evolutionary textbooks blur this huge problem by insisting that various life forms “converged” based on one characteristic that is often alleged to have diverged from another life form.

That is, somewhere in ages past, a living creature developed a divergent feature in its anatomical or biochemical composition that converged into another life form, bringing about a major change in evolutionary development. As ICR geneticist Dr. Jeffrey Tomkins stated: “Convergent evolution is the idea that the same trait, or set of traits, in completely different organisms were somehow produced through independent evolutionary processes.”3

This is a fascinating presentation of sheer fiction based on nothing more than purely subjective opinions. ICR’s Dr. Randy Guliuzza pointed out that “convergence is not an observable process but is rather ‘observed’ only in someone’s mind as imaginary visualization. Convergence is another evolutionary mystical, mental construct.”4 No hint is given in these textbooks that such reasoning is not based on objective facts.

Often unstated and completely ignored is the evolutionary assumption that processes during the unobserved ages of the past were operating at the same rate and with the same chemical and physical properties as we observe and measure today. This uniformitarian assumption is usually expressed as “the present is the key to the past.” Thus, modern measured rates and processes are used to extrapolate the long ages of past evolutionary history—which itself is an assumptive dogma not demonstrated by empirical data.

Natural empirical science involves objective analysis and detached investigation, careful quantification and classification, as is done in chemistry and physics. Evolutionary textbooks ignore the condemning evidence of the many anatomical and biochemical contradictions exposed by the trees of evolutionary relationships. These rival and disruptive phylogenies discredit any notion of a uniformitarian evolutionary past, while at the same time aligning well with a non-uniformitarian understanding of the only available empirical data of the unobserved past—the fossil record.

Yet, in spite of the evolutionary story resting so firmly on a uniformitarian assumption of the unobserved past, the same evolutionary biology textbooks will insist on the openly opposite idea that life spontaneously generated from non-life, a non-uniformitarian principle that has absolutely no data to support it. Science—the observable, testable, repeatable study of present processes—insists that life only comes from pre-existing life. Everything that science knows about life verifies this simple principle that new life is never the result of non-life. To state otherwise is to consciously fabricate and willingly promote a fallacious error.

It is interesting to note that 2,000 years ago the apostle Paul was inspired to use the very terms that most aptly describe the evolutionary doctrine enshrined in the biology textbooks of the 21st century. The studies of biology and genetics have exposed a marvel of complexity and informational instructions that define the myriad details of living things. The facts shout the reality of a Creator who has brought life into existence by His own omnipotence and omniscience. The “babblings” of convergent evolution are nothing more than aggrandized terms for an effort to explain away the evidence of God’s presence and power.

The contradictions to evolution offered by the overwhelming evidence of the design of living things are the antithesis of evolutionary biology. It’s clear from the Scriptures that those who embrace these manufactured evolutionary stories—no matter how cleverly arranged and shrewdly couched—do so because they wish to have an intellectual basis for rejecting the Creator so clearly presented in the “things that are made, even His eternal power and Godhead, so that they are without excuse” (Romans 1:20).

Although they knew God, they did not glorify Him as God, nor were thankful, but became futile in their thoughts, and their foolish hearts were darkened. Professing to be wise, they became fools, and changed the glory of the incorruptible God into an image made like corruptible man—and birds and four-footed animals and creeping things. (Romans 1:21-23)

Most of ICR’s readers are familiar with the Bible passages that instruct Christian parents to make sure their children are brought up “in the training and admonition of the Lord” (Ephesians 6:4). It is certain that the Lord expects a father to “command his children and his household after him, that they keep the way of the LORD, to do righteousness and justice” (Genesis 18:19).

Those basic principles were part of what motivated ICR to build the Discovery Center for Science & Earth History. Our culture is dominated by godless evolutionary naturalism and humanism. The academic world is steeped in those philosophies, and it is almost impossible to carve out a niche where our families can easily learn of the foundational doctrines of Jesus Christ as Creator, Redeemer, and coming King.

Our mission at ICR has not changed, but our platform has expanded. As ICR prepared to construct the Discovery Center, we all felt strongly that a passage from Psalm 78 encapsulated the commitment that would center our thinking and guide our decisions going forward with the center’s design and purpose.

May the Lord help us all to be part of the solution to these eternal responsibilities.