New research has confirmed that an extinct type of ape called Australopithecus afarensis, which includes the famous "Lucy" fossil, was a well-adapted tree climber. The research team conducted a detailed anatomical analysis of two complete shoulder blades of a fossil Australopithecince called "Selam," reported in the journal Science to be about 3.3 million years old.1 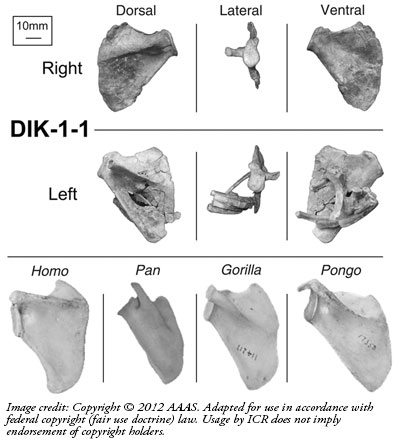 A number of studies in zoological anatomy indicate that the various species of Australopithecus represent nothing more than different varieties of an extinct ape kind.2 The fact that fully human remains have been found in rock layers as old as the ones containing Australopithecus fossils, further complicates the evolutionary story—a phenomema discussed at length by paleontologist Marvin Lubenow.2

Amazingly, it took 11 years for researchers to extract the fossil shoulder blades of Selam from the sandstone rock in which they were encased. Science study co-author Zeresenay Alemseged told LiveScience, "Because shoulder blades are paper-thin, they rarely fossilize, and when they do, they are almost always fragmentary." Alemseged also said that "finding both shoulder blades completely intact and attached to a skeleton of a known and pivotal species was like hitting the jackpot."3

Lucy, a fossil that was once widely promoted as a hypothetical human ancestor, had shoulder sockets that faced upward, a common feature of modern apes. The Selam fossil has the same type of sockets. This unique feature enables apes to dexterously climb and swing from tree branches. In contrast, humans have downward facing shoulder sockets at birth that gradually develop to face forward as they become adults. This position is also integral to the uniquely human walking gait.

Also in contrast to humans, ape shoulder morphology does not change during development. The authors wrote in Science, "Many of these traits change significantly throughout modern human ontogeny [development from an embryo], but remain stable in apes. Thus, the similarity of juvenile and adult fossil morphologies implies that A. afarensis development was apelike."1

The idea that humans evolved from apes by leaving the trees to walk across the ground in a largely bipedal lifestyle, is a central evolutionary paradigm. The authors of the recent Science paper wrote, "Scapular traits throughout African ape development are associated with shifts in locomotor behavior. This affirms the functional relevance of those characteristics, and their presence in australopith fossils supports the hypothesis that their locomotor repertoire included a substantial amount of climbing."1 If australopithecines were bipedal while on the ground, they did not walk like humans. And this recent analysis clearly shows that they were also well-adapted tree climbers with unique bone structures not found in humans.

No doubt this report was a setback for the evolutionary model of human origins that had postulated the idea that Australopithecines had largely transitioned to the ground from the trees. Indeed, another recent study evaluating fossilized food particles between Australopithecus teeth showed a diet of primarily tree-based food (tree leaves, fruits, wood, bark), compared to a small amount of grass.4

Even the highly subjective field of anthropology vindicates the scientifically accurate claim of the Bible—that man is created uniquely in the image of God.