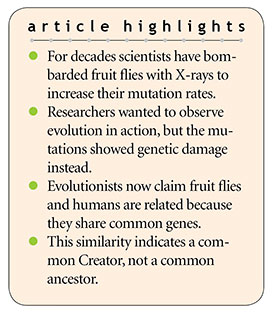 There are around 152,000 named species of flies (the order Diptera) representing approximately 10% of all species on Earth. One genus in particular, the pesky fruit fly Drosophila, is found all around the globe. It’s used in fields of scientific research that include behavior, physiology, genetics, and development.

Thomas Hunt Morgan, a geneticist and Darwin critic, studied this fascinating insect at the turn of the last century in his famous Fly Room at Columbia University. He later found the creatures could be mutated by X-rays. Indeed, in 1926 Hermann Muller discovered that heavy doses of X-rays could cause mutation rates to rise by 15,000%. In following decades, strange and lethal mutations were given colorful names such as spook, bazooka, bladder-wing, popeye, and hunchback.

Scientists have conducted over a century of detailed fruit fly research. If real evolution were to be observed, it would be in a lowly insect like the fruit fly.1 They’re small, fairly easy to handle, sexually mature in just days, and have four pairs of chromosomes. This means it isn’t too difficult to locate a mutated gene in the Drosophila genome.

Developmental biologists know that in order for macromutations to affect body-plan formation in such a way that could change one kind of animal into another kind, the mutations must occur early in the animal’s development.2 Ironically, it has been consistently found that early developmental mutations damage a creature.

Those genes that control key early developmental processes are involved in the establishment of the basic body plan. Mutations in these genes will usually be extremely disadvantageous, and it is conceivable that they are always so.3

Evolutionists, frustrated by not seeing any real evolutionary change in fruit flies no matter how much they mutate, have now resorted to trumpeting the similarities of flies and people in a strange hypothesis called deep homology.4 These scientists maintain that the fruit fly genome shares widespread genetic content with people. Of course it does…who would doubt it? So do mice, oceanic invertebrates, birds, and a host of other creatures—even plants!

Fruit flies must breathe, eat, and drink water, so it follows that much of their genome is made up of genes involved with basic respiratory and digestive (carbohydrate, fat, and protein) physiology just like other animals and people. But having a few similar genes during embryonic development doesn’t mean the creatures have a common and unknown ancestor. As evolutionist V. Louise Roth recently stated, “Homology is a hypothesis and an inference.”5 Creation scientists couldn’t agree more.6 The idea of homology is shot through with evolution-based presumptions and suppositions. Even anti-creationist Michael Allaby said homology was “the fundamental similarity of a particular structure in different organisms, which is assumed to be due to descent from a common ancestor.”7

This similarity indicates a common Creator, not a common ancestor.

God has designed the embryonic development of people and fruit flies (as well as virtually all bilateral animals) to be similar at certain basic levels, having corresponding aspects of their body plans. But this is hardly proof of evolutionary continuity. It is, however, clear evidence of a common Designer.

* Mr. Sherwin is Research Associate Senior Lecturer, and Science Writer at the Institute for Creation Research and earned his M.A. in zoology from the University of Northern Colorado.